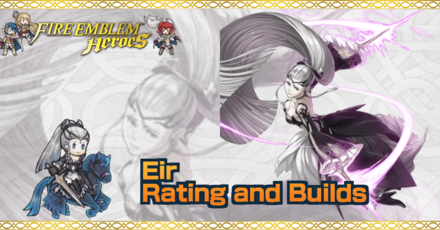 This is a ranking page for the hero Eir - Merciful Death from the game Fire Emblem Heroes (FEH). Read on to learn the best IVs (Individual Values), best builds (Inherit Skill), weapon refinement, stats at Lv 40, and more for Eir.

Eir's best IVs are +Atk/-HP, although she will be held back by a flaw in pretty much any stat, so if you cannot merge her, base stats are also a good option. Since she has Lyfjaberg and Swift Sparrow, which will both give her a solid Spd boost in combat, +Atk will help maximize her damage. +Spd is also a good IV as it will further increase the amount of follow-up attacks she gets.

If you are building a +10 merged Eir, we recommend +Atk. With +10 merges, Eir's base Spd will reach 41, and she will have other skills to help increase it even further, so it would be better to focus on increasing the damage output from each attack she deals. Since HP and Def are both superboons that will give her +4 to the stat, these are good +IV options for a +10 merge.

Eir is a ranged physical attacker (range = 2). Therefore, when not accounting for the Weapon Triangle, the amount of damage she deals will be equivalent to her Atk minus the foe's Def stat. She is also a Mythic Hero, who will help increase your ranking in Aether Raids.

Eir's exclusive weapn skill Lyfjaberg will give her Atk/Spd+4 and prevent an enemy follow-up attack when she initiates combat and has at least 50% HP. When combined with her A skill Swift Sparrow, she will gain Atk/Spd+8, making it very easy to gain a powerful follow-up attack. Her weapon's follow-up attack blocking feature is also extremely useful for countering enemy skills like Quick Riposte.

Eir's B Skill Mystic Boost will nullify the common effect of dragonstones which calculate damage using the lower of foe’s Def or Res. On top of this, she can nullify skills like Wrathful Staff and Staves that have been refined to calculate damage like other weapons, so she is very good at countering both dragon and staff enemies.

What's more, this skill restores HP after combat. Taking too much damage will cancel out the effects of Lyfjaberg, so unless you have a reason to use another B skill, we highly recommend keeping this one equipped as is.

Can heal her allies from anywhere on the map

At the start of each turn, Eir's C skill Sparkling Boost will restore 10 HP to the ally who has taken the most damage. Healing an ally who has been targeted by multiple foes can often be difficult or even risky, so having the ability to heal allies without even going near them provides a huge advantage.

With the bonus from Lyfjaberg included, Eir has a base Res stat of 34, which allows her to safely tank magic attacks. Since she also has Mystic Boost, she can nullify skills that use the lower of Res and Def, meaning that she can usually tank attacks from dragon foes as well without fear of being OHKO'ed.

While Eir has a good Res stat, her Def leaves a lot to be desired. She can easily be OHKO'd with one or two physical attacks. Bows will also deal 1.5x damage to her and will almost always spell destruction, so make sure she does not go near the attack range of this type of foe.

Since she is a flying unit, Eir will benefit from being paired with allies who have skills like Flier Formation or Air Orders, as she will be able to cover more distance and attack more foes. Additionally, if an ally has Hone Fliers, Eir will be able to use this extra power to take down her foes more easily.

Units who can tank physical attacks

Eir has a poor Def stat, so she will need an ally who can tank physical attacks on her behalf. Since Bows are her biggest weakness, a unit with Distant Counter who can tank attacks from archers and retaliate will be a huge asset to her team.

Units who are strong agains foes with penalties

Eir is a dagger unit, so if an ally can fight debuffed foes and gain some kind of advantage, the team will have even better synergy. Hrid can gain a guaranteed follow-up attack on foes with an active penalty, and he has Distant Counter, so is an excellent teammate for Eir.

With her low Def, Eir struggles against physical attackers in general. If a foe with a bow or Brave Weapon attacks Eir, she will almost certainly perish. While her high Res stat means she can deal with magic attackers, she could keep far away from physical attackers, and leave them to another ally.

Eir - Merciful Death Only Appears as a 5 Star Hero!

Eir as a Source Hero

Eir can be used to inherit the skill Mystic Boost 3. However, she is a Mythic Hero and will be very useful during Light Season and when used in Aether Raids, so we recommend leveling and building Eir before foddering or merging any duplicates.


How to Get Eir / Illustrations / Voice Actor / Quotes

How to Get Eir

Eir can be obtained automatically after clearing Book III - Chapter 1, Part 5 (Normal). When obtained, they will already be at a 5★ Rarity and have base stats (no IVs).

Eir is a limited time Hero who can be pulled from a Legendary Hero Summoning event. They do not appear in regular summons.

Register as a member and get all the information you want. (It's free!)
Login
Opinions about an article or post go here.
Opinions about an article or post
We at Game8 thank you for your support.
In order for us to make the best articles possible, share your corrections, opinions, and thoughts about "Eir Builds and Best IVs" with us!
When reporting a problem, please be as specific as possible in providing details such as what conditions the problem occurred under and what kind of effects it had.