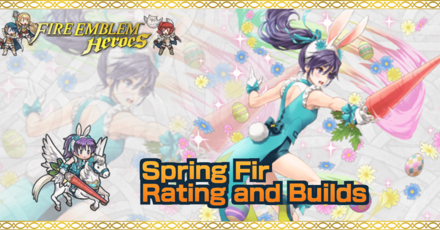 This is a ranking page for the hero Fir - Student of Spring from the game Fire Emblem Heroes (FEH). Read on to learn the best IVs (Individual Values), best builds (Inherit Skill), weapon refinement, stats at Lv 40, and more for Spring Fir. 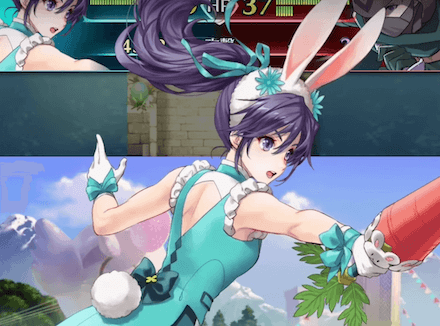 Spring Fir's best IVs are +Spd and -Res. With a +Spd IV, Fir gets Spd+4, which will make it extremely easy for her to get follow-up attacks on foes. As HP and Def are both superbanes, -Res is probably the easiest bane to manage.

If you are building a +10 merged Spring Fir, we recommend a +Atk IV. At 10 merges, her base Spd will reach 45 which is already nothing to scoff at. If you want to push it even further, you can do so with buff skills to the stat, so we recommend getting a boon that increases the damage output from each attack. If Spd is your top priority though, you could still go with a +Spd IV.

Spring Fir's weapon cannot currently be refined. This section will be updated if it becomes refineable in the future!

Spring Fir is a close physical attacker (range = 1). Therefore, when not accounting for the Weapon Triangle, the amount of damage she deals will be equivalent to her Atk minus the foe's Def stat.

Weapon accelerates special trigger and is effective on armor

Spring Fir's exclusive weapon Bun-Bun Baton is effective on armored units, speeds up her special trigger, and can cancel enemy skills that guarantee follow-up attacks or prevent a follow-up attack from Fir. These three effects will allow her to deal massive damage to armored units and counter skills like Wary Fighter or Quick Riposte.

Gains a bonus when not adjacent to allies

Fir's A Skill Atk/Spd Solo 3 will give her Atk/Spd+6 when she is not adjacent to another ally. Breaking away from your team to solo foes with Fir will allow her to get a pretty significant bonus.

The C Skill Air Orders will allow any flying allies that are adjacent at the start of a turn to move to a space adjacent to any ally within 2 spaces. This will allow flying allies to move up to three spaces to charge forward, or pull back to hide behind a tank, making it a very versatile skill on an all-flier team.

As a flying unit, Fir takes 1.5x damage from bows and weapons effective on flying units. Be sure to keep her out of the range of archers and leave them to other units.
Heroes with Effective Skills

Should you Unlock Potential for Spring Fir?

Fir - Student of Spring Only Appears as a 5 Star Hero!

Spring Fir as a Source Hero

Spring Fir can be used as fodder to inherit Atk/Spd 3 or Air Orders 3. However, as a rare Special Hero, think hard about whether or not you are okay with losing her before foddering her off.

How to Get Spring Fir / Illustrations / Voice Actor / Quotes

How to Get Spring Fir

Spring Fir is a limited time Hero who can be pulled from a Special Heroes Summoning Event. They do not appear in regular summons.

Register as a member and get all the information you want. (It's free!)
Login
Opinions about an article or post go here.
Opinions about an article or post
We at Game8 thank you for your support.
In order for us to make the best articles possible, share your corrections, opinions, and thoughts about "Spring Fir Builds and Best IVs" with us!
When reporting a problem, please be as specific as possible in providing details such as what conditions the problem occurred under and what kind of effects it had.