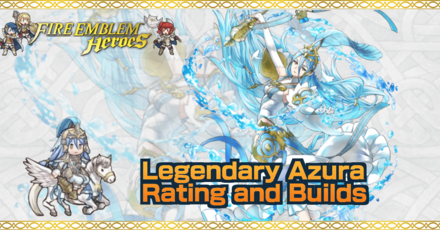 This is a ranking page for the hero Azura - Vallite Songstress from the game Fire Emblem Heroes (FEH). Read on to learn the best IVs (Individual Values), best builds (Inherit Skill), weapon refinement, stats at Lv 40, and more for Legendary Azura.

Legendary Azura's recommended IVs are +Spd and -Res. A higher Spd stat means she will be able to prevent more follow-up attacks, increasing her survivability and extending her support. While a Res flaw will bring this stat to a meager 21, it will give her balanced defensive stats, and will make attacks that target the lower of her Def or Res less significant.

However, considering that Azura is a support hero best left out of combat, this unit will be extremely useful regardless of her IVs.

When using Azura outside of Arena Battles, we recommend giving her an A slot skill like Fury that will boost all of her stats, or Triangle Adept, which will make her attacks against red units much more powerful. Guidance in the seal slot will increase her allies’ mobility.

Legendary Azura's Exclusive Weapon currently cannot be refined. This section will be updated if it becomes refinable in the future.

Legendary Azura is a ranged magic attacker (range = 2). Therefore, when not accounting for the Weapon Triangle, the amount of damage she deals will be equivalent to her Atk minus the foe's Res stat. In addition, she has powerful assist skill that can grant additional movement to allies who have completed their turn.

You will be given a Water Blessing upon summoning Legendary Azura. Since Azura is a Water Type Legendary Hero, she will give an [red]HP+3 and Res+4 buff[/res] to all allies she appears together in battle with during Water Season if they are equipped with a Water Blessing.

Exclusive weapon can buff all of her allies skills

Legendary Azura's exclusive weapon Prayer Wheel will grant a bonus equal to the highest active bonus to all stats of an ally who she cast her refresher skill on. For example, if target has a +6 bonus to Atk, it will grant them Atk/Spd/Def/Res+6, making this a very powerful support skill.

Increases her allies mobility with her exclusive skill

Her exclusive assist Gray Waves allows the target to move 1 extra space when she refreshes their movement, as long as they are infnatry or flying. It goes without saying that this will be useful practically anywhere, but it really shines in its applicability for Arena Battles and Aether Raids.

Can raise your arena score

B Duel Flying is a special skill that treats the unit’s stats as 170 in the Arena, allowing your overall score to increase when using her. It is usable by any blue flying unit, so equip it and increase your score as you would like, but keep in mind that as an A slot skill it means you will lose the ability to equip Fury or Triangle Adept.

As a flying unit, Azura will take heavy damage from bows and other skills that are effective on flying units. Make sure you keep her out of the range of any bow wielding units.

With her low stat total and slightly above average Spd stat, you cannot expect much from Azura in terms of combat. Be sure to keep her around tough units who can protect her as she supports them.

Should you Unlock Potential for Legendary Azura?

Azura - Vallite Songstress Only Appears as a 5 Star Hero!

Legendary Azura as a Source Hero

Inheriting B Duel Flying 3 and Aerobatics 3

Legendary Azura has many valuable skills to inherit like B Duel Flying 3 and Aerobatics 3. However, since she is one of the best support units in the game, we recommend you raise at least one Azura without foddering her off.

How to Get Legendary Azura / Illustrations / Voice Actor / Quotes

How to Get Legendary Azura

Legendary Azura is a limited time Hero who can be pulled from a Legendary Hero Summoning event. They do not appear in regular summons.

Register as a member and get all the information you want. (It's free!)
Login
Opinions about an article or post go here.
Opinions about an article or post
We at Game8 thank you for your support.
In order for us to make the best articles possible, share your corrections, opinions, and thoughts about "Legendary Azura Builds and Best IVs" with us!
When reporting a problem, please be as specific as possible in providing details such as what conditions the problem occurred under and what kind of effects it had.