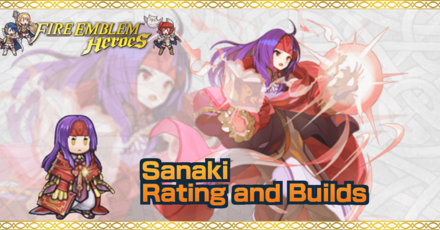 This is a ranking page for the hero Sanaki - Begnion's Apostle from the game Fire Emblem Heroes (FEH). Read on to learn the best IVs (Individual Values), best builds (Inherit Skill), weapon refinement, stats at Lv 40, and more for Sanaki.

The best IVs for Sanaki are +Atk and -Def. A +Atk IV adds to her best asset, her very high Atk stat. Her mediocre Def stat is safe to take Def as a bane, although be aware that it will lead to -4 in the stat.

We recommend the Special Effect Refine for Cymbeline

The special effect refine for Cymbeline has the same effect as Joint Drive Atk. It allows Sanaki to contribute to your team's offensive power, even if she has used her action already. The self buff is also amazing as it allows her to gain an advantage with dragonstone and tome users if she is within 2 spaces of a flying ally.

However, as it is reliant on having flying allies within 2 spaces, you might need to compromise your party composition to take full advantage of this special refinement. If you are not using Sanaki in a party with fliers, then you should go for the Atk or Spd refine instead.

Sanaki is a ranged magic attacker (range = 2). Therefore, when not accounting for the Weapon Triangle, the amount of damage she deals will be equivalent to her Atk minus the foe's Res stat.

Multiple Atk Buffs for her Allies

Sanaki has 2 buffs for the Atk stat of her allies. They do not stack, but the trigger requirements are different, allowing her to buff her allies in different situations.

As stated above in the refinement section, the special effect refine for Cymbeline has the same effect as Joint Drive Atk. This skill can buff both Sanaki and her allies. The trigger requirement of the skill also makes her a candidate for a flying-centric team.

Sanaki has access to Triangle Adept 3 which boosts her Atk by +20% if she gets into combat with green units. This allows Sanaki to deal with powerful green units with ease. This makes Sanaki a valuable unit because the green class boasts strong tanks like Surtr or L!Hector, and she has the tools to easily take them out.

In addition, Sanaki has very high Res, which means she is a hard counter to strong green tome users and green dragonstone units like the top tier Winter Sothis.

Can Convert Penalties into Bonuses

Sanaki's Assist skill, Harsh Command, can convert allies' penalities into buffs. This can turn penalties like Chill Atk 3, which should already be inflicted on one of your most powerful attacking units, into buffs that will turn them into even more deadly attackers. Another skill that you can take advantage of is Seal Atk Spd.

Sanaki's kit utilizes Triangle Adept 3, which makes her extra strong against green units, but very weak against blue units. She can be one-shot by most offensive blue units so pay attention to her positioning in relation to them, and leave them to Sanaki's allies so she can focus her firepower on other units.

With her low Def, Sanaki is very vulnerable to physical attackers. If attacked, there is a high possibility that she will be taken out. Keep her out of the danger zone in the enemy phase, and make sure that she only ever initiates combat with physical attackers when she can make it out safely.

Should you Unlock Potential for Sanaki?

Sanaki as a Source Hero

All of Sanaki's skills can be inherited from cheaper 4★ units. Sanaki is a 5★ unit, so it is much smarter to fodder off from 4★ units instead. Make sure to consider all of your resources before foddering off Sanaki!

How to Get Sanaki / Illustrations / Voice Actor / Quotes

Sanaki is a Hero who can be pulled from any summon.

Register as a member and get all the information you want. (It's free!)
Login
Opinions about an article or post go here.
Opinions about an article or post
We at Game8 thank you for your support.
In order for us to make the best articles possible, share your corrections, opinions, and thoughts about "Sanaki Builds and Best IVs" with us!
When reporting a problem, please be as specific as possible in providing details such as what conditions the problem occurred under and what kind of effects it had.