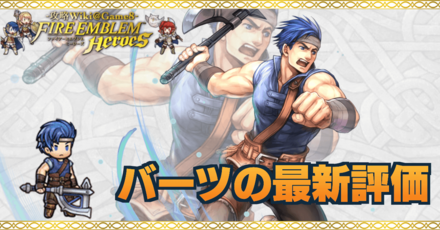 This is a ranking page for the hero Barst - The Hatchet from the game Fire Emblem Heroes (FEH). Read on to learn the best IVs (Individual Values), best builds (Inherit Skill), weapon refinement, stats at Lv 40, and more for Barst.

Barst's best IVs are +Atk and -Res. Barst will gain a guaranteed follow-up through his weapon Brave Axe when he initiates combat, so a higher Atk stat means that a doubled attack will deal significantly more damage. If you are planning on swapping out his weapon skill, then a +Spd IV may actually be more suitable.

This build is based around changing Barst’s weapon and equipping him with Fury. Equipping him with Killer Axe+ will raise his Atk stat, and then giving him Fury will give him a nice stat balance. Bonfire will be easily to trigger, and can deal plenty of damage.

This build is based on Wo Gùn+ and Steady Breath. Through Steady Breath and Quick Riposte 3, his special cooldown will be greatly reduced, allowing him to steadily deal heavy damage to his foes. Wo Gùn+ deals 10 damage when a special triggers, meaning he will be able to successfully deal damage even to units with very high defense.

We recommend the Special Effect Refine for Devil Axe

Barst's exclusive wepaon can be refined with the special effect upgrade to gain the effect of Wrath 3. This effect is easy to trigger since the weapon's skill will deal damage to Barst, and having it as a built in effect allows for additional creativity with his passive skills.

Bast is a close ranged physical attacker (range = 1). Therefore, when not accounting for the Weapon Triangle, the amount of damage he deals will be equivalent to his Atk minus the foe's Def stat. In addition, he has versatile assist skills, and a weapon that lets him attack consecutively when initiating combat.

Barst has the exclusive weapon Devil's Axe, which will add +4 to all stats in combat. Although this weapon deals 4 damage to Barst after combat, the stat boost is worth it, and if you refine his weapon with the special effect upgrade, this demerit can actually make the bonus effect easier to trigger.

A beast of position adjustment

Barst's strength would have to lie in his two useful movement skills. He can adjust the positions of both allies and foes, making him rather versatile.

Can support his allies with Spur Atk 3

Spur Atk 3 allows Barst to buff his allies' Atk stat. Reposition your foes and allies, and support your allies to take on the enemy!

Watch out for magic attackers

Another weakness lies in his low Res stat. Make sure he stays out of reach from enemy mages and dragons.

Should you Unlock Potential for Barst?

We Do Not Recommend Unlocking Potential for Barst - The Hatchet!

Barst as a Source Hero

You should inherit Reposition from Barst. Reposition is so versatile and can work with practically any hero, so the more Barsts that you can summon to use as fodder, the better.

How to Get Barst / Illustrations / Voice Actor / Quotes

How to Get Barst

Barst is a Hero who can be pulled from any summon.

Register as a member and get all the information you want. (It's free!)
Login
Opinions about an article or post go here.
Opinions about an article or post
We at Game8 thank you for your support.
In order for us to make the best articles possible, share your corrections, opinions, and thoughts about "Barst Builds and Best IVs" with us!
When reporting a problem, please be as specific as possible in providing details such as what conditions the problem occurred under and what kind of effects it had.