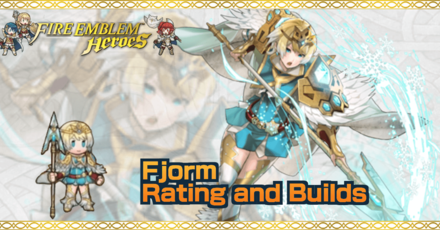 This is a ranking page for the hero Fjorm - Princess of Ice from the game Fire Emblem Heroes (FEH). Read on to learn the best IVs (Individual Values), best builds (Inherit Skill), weapon refinement, stats at Lv 40, and more for Fjorm.

Fjorm's strength is her well balanced stats. Receiving her as a free unit in the story will mean that she has base stats, and this is the best option for her due to her many superbanes.

We recommend a +Spd IV when builing a +10 merged Fjorm. With a +Spd IV and 10 merges, Fjorm's Spd stat will reach 38. She might not always get a follow-up attack, but this increases her survivability by avoiding most of them.

Especially with the February 2021 update, Fjorm's base kit is very complete. By adding a Distant Def 3 Sacred Seal, you improve her matchups against ranged units. Make sure that Atk/Def Unity is always activated to ensure maximum matchup efficiency.

By replacing Ice Mirror with Aether, Fjorm takes on a more mixed role instead of rocking straight-up defense. The main reason why she can run an Aether kit is because of Leiptr's Distant Counter effect. She is not a sitting duck when attacked and the attack she dishes out in both phases allows her to charge Aether faster. It might seem a defensive build at first, but consistent Aether activations through her continuous attacks and follow-up attacks from Quick Riposte 3 will tell otherwise.

Fjorm's Exclusive Weapon currently cannot be refined. This section will be updated if it becomes refinable in the future.

Fjorm is a close physical attacker (range = 1). Therefore, when not accounting for the Weapon Triangle, the amount of damage she deals will be equivalent to her Atk minus the foe's Def stat.

Legendary Fjorm is a Water-Type Legendary Hero, and when summoned, you will receive a Water Blessing. During Water Season, allies who appear in a team alongside Fjorm will gain HP+3 and Spd+3 when they have been given a Water Blessing.

Leiptr Allows Counterattacks Regardless of Distance

Leiptr enables Fjorm to counterattack enemies regardless of distance. This increases her overall viability, and means that she will be pretty decent at tanking attacks form tome users.

This synergizes with her tools that are geared towards defeating ranged units discussed below.

Ice Mirror II reduces damage from long-range sources and adds the reduced amount (from all sources, not just Ice Mirror) to Fjorm's next special attack. This synergizes well with Shield Pulse 3, a skill which Fjorm has access to that reduces damages from enemies if conditions are met. 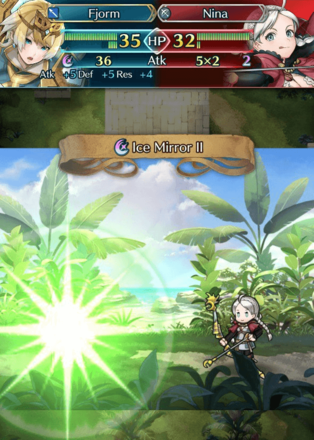 Ice Mirror II procs because Fjorm goes to combat with a ranged foe. 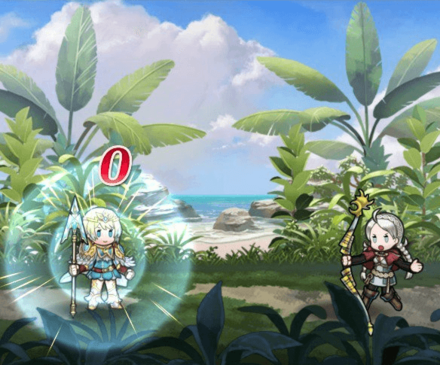 The calculated damage is 5x2, but Fjorm takes 0 damage because of Ice Mirror II's effects.

Neutralizes debuffs to Atk/Def and grants buffs to it

If Fjorm is within 2 spaces of an ally, Atk/Def Unity grants her +5 Atk/Def and converts penalties on Atk/Def and turns them into bonuses. It is a pretty simple trigger condition and it is almost impossible to have trouble keeping it online.

This makes Fjorm an effective unit against lineups that make use of debuffs. The more debuffs Fjorm gets, the stronger and bulkier she becomes. You can even deliberately catch debuffs to make her stronger in the phases to come!

Available from the Story Map!

A 5 star Fjorm can be obtained by clearing Chapter 1 of Book 2! The map is pretty easy to clear and Fjorm is quite strong, so clear the map to get her as soon as possible. For those looking for a +10 merge Fjorm, this free Fjorm can be used as one of the merges.

Fjorm has somewhat subpar speed. Because of this, she is susceptible to follow-up attacks from speedier units. Luckily, she has pretty good Def and Res stats. If you can afford to buff her Spd through ally buffs or seals, she can become quite adept at tanking attacks.

Units that have reliable, powerful buffs

Fjorm is blessed with balanced stats. Buffs will allow her to be more flexible depending on the map that she is in. Some units that she can greatly benefit from include Flying Olivia, Kaden and L!Azura, who can buff all of her stats.

Characters that can deal with green units

Fjorm's balanced stats can prove insufficient against green characters that have high offensive ability. It is a good idea to pair Fjorm with red characters that can deal with strong green units so that Fjorm can focus on taking out the other units.

Green units that are either durable or have high offensive power

Because of Fjorm's balanced stats, she might have a very hard time dealing with tanky green units like Surtr or powerful offensive green units like Legendary Celica and Valentine's Alm.. Taking a hit from one of them will most likely be fatal.

Should you Unlock Potential for Fjorm?

Fjorm - Princess of Ice Only Appears as a 5 Star Hero!

Fjorm as a Source Hero

Fjorm can be used to inherit the skills Shield Pulse 3 or Atk/Def Unity. However, since Fjorm is a powerful hero that can lead your team in the Arena, we recommend training and building around her instead.

If you are able to inherit Atk/Def Bond 3 from another unit, you can get both skills from Fjorm.

How to Get Fjorm / Illustrations / Voice Actor / Quotes

Fjorm can be obtained automatically after clearing Book II - Chapter 1, Part 5 (Normal). When obtained, they will already be at a 5★ Rarity and have base stats (no IVs).

Fjorm is a limited time Hero who can be pulled from a Legendary Hero Summoning event. They do not appear in regular summons.

Register as a member and get all the information you want. (It's free!)
Login
Opinions about an article or post go here.
Opinions about an article or post
We at Game8 thank you for your support.
In order for us to make the best articles possible, share your corrections, opinions, and thoughts about "Fjorm Builds and Best IVs" with us!
When reporting a problem, please be as specific as possible in providing details such as what conditions the problem occurred under and what kind of effects it had.