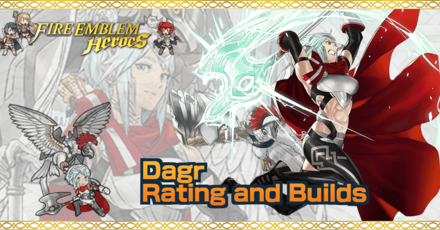 This is a ranking page for the hero Dagr - Sun's Radiance from the game Fire Emblem Heroes (FEH). Read on to learn the best IVs (Individual Values), best builds (Inherit Skill), weapon refinement, stats at Lv 40, and more for Dagr.

The best IVs for Dagr are +Spd/-Res.

Since Dagr already comes with very high attack, having more Spd will increase her chances of doubling.

Her Res is already pretty low, so it woould be safe to take it as a bane.

This is for the same reason as above. Dagr will have 52 Spd at 10 merges, making her extremely formidable due to the buffs she gets from Skinfaxi.

You could opt to have +Atk for more firepower, as it will allow her to deal a lot of damage to armored units.

A budget build for Dagr with minimal skill inheritance. Dagr is already a very powerful unit with her default Special, but we recommend switching it to Moonbow to trigger it sooner or Noontime for sustain. For her Sacred Seal, you can use Mystic Boost 3 for more sustain, but you can also opt for Swift Sparrow 2 or Swift Stance 2.

A DC build for Dagr. Mystic Boost 3 is still picked up for the sustain to keep Skinfaxi up, and it also provides a counter to dragons and other units that make use of adaptive damage. Distant Counter replaces Atk/Spd Push 4 which sacrifices huge firepower, but Dagr will be more flexible as it allows her to lure out and KO ranged defense in AR. The B slot is a bit tricky, though you can definitely keep using Sun-Twing Wing, Spurn 3 is recommended as it makes use of her great Spd to reduce damage. You can also use Repel 3, or Close Call 3 depending on your preferences and resources.

Dagr's weapon cannot currently be refined. This section will be updated if it becomes refineable in the future!

Dagr is a close physical attacker (range = 1). Therefore, when not accounting for the Weapon Triangle, the amount of damage she deals will be equivalent to her Atk minus the foe's Def stat.

Dagr's exclusive weapon, Skinfaxi has the effect of taking the penalties on Dagr and turns them into buffs x2 while in combat, but the debuff will still be present so the net value will be a positive buff (Ex: if Ike has a -7 penalty in Atk, it turns into a +14 Atk buff while in combat, resulting in a positive buff of Atk+7). The more penalties Dagr has, the stronger she gets.

Additionally, it grants +5 Atk/Spd/Def/Res to Dagr. All these are only present when Dagr's HP ≥ 25%. 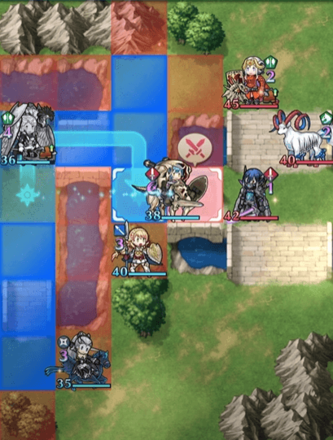 As seen above, Skinfaxi granted additional movement to Reginn. She would not have reached that spot from her original position if Dagr and 【Pathfinder】. Specifics can be read in the skill tooltip.

Dagr can take advantage of Even Tempest 3 to position her advantageously for some Pathfinder cheese. This is very useful in Aether Raids as each square of movement in this fast-paced game mode is important.

Dagr has the A slot skill Atk/Spd Push 4, which grants Atk/Spd+7 so long as her HP is at or above 25%. It will inflict damage on Dagr after battle, but considering a higher Spd allows Dagr to deal more damage and receive less follow-up attacks in the process, this is worth it. You can always patch this up with healers.

It also inflicts -5 Spd/Def on the foe, but these two effects only activate if Dagr's HP ≥ 25%. It is a easy-to-meet condition, but Atk/Spd Push 4 might put you into a situation where it would not activate. Be mindful, Summoner! 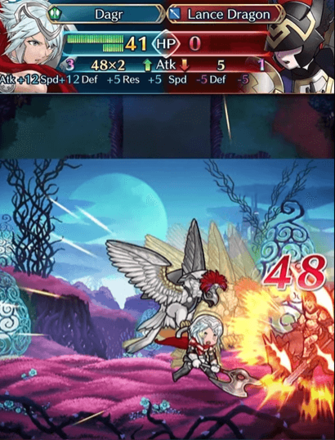 Even Tempest 3 is a skill that debuted with Dagr It allows her to move an extra space in even-numbered turns. This means that half of the time, Dagr can move up to 3 spaces! This can be the difference between victory or defeat in some cases especially in turn-limited maps such as Aether Raids.

There are no trigger conditions besides being under an odd-numbered turn. This makes it a situational, but very easy-to-use skill that provides lots of utility to Dagr. This skill can also make up for some great combos with 【Pathfinder】. The extra range can allow Dagr to zoom into a position where 【Pathfinder】 is most advantageous.

The trigger conditions of:

Relies Dagr to be above a certain HP range. Though it is not that high, and Tempest's HP requirement is eliminated once the final skill is obtained, you can still be put into sticky situations from Atk/Spd Push 4's self-damage coupled with damage from hostile sources.

Since Dagr is virtually shut down at that range, Dagr parties are recommended to provide her a mechanic to heal herself. The easiest way to fix this is through a staff unit.

Low Res makes her an easy target for mages

Dagr has no Distant Counter built in and her Res is quite low, which means that high power red mages like Valentine's Lif or Lysithea can take her out.

Dagr can fit in a wide variety of teams as she can mostly take care of herself and is a powerful unit.

She can be paired with those that can boost her firepower even more, like Legendary Eliwood's Bonus Doubler effect on his Ardent Durandal or any of the dancers above.

She can also act as a bridge for her allies due to her Pathfinder skill, enabling them to cross even further across the map.

Though she does boast high Atk and Spd, Dagr may struggle against tanky units that are built and merged well.

Due to her low Res, high power red mages should have no problem in defeating Dagr without worrying about retaliation, as she cannot counterattack from range.

Should you Unlock Potential for Dagr?

Dagr - Sun's Radiance Only Appears as a 5 Star Hero!

Dagr as a Source Hero

Inheriting Even Tempest 3 or Atk/Spd Push 4

Dagr can be used to inherit Even Tempest 3 or Atk/Spd Push 4. If you are able to inherit Atk Spd Push 3 from another unit, you can get both skills from Dagr! However, Dagr is a powerful Mythic hero whom can unlock a 7th raider slot in Aether Raids. Please think carefully before fodderring her off!

How to Get Dagr / Illustrations / Voice Actor / Quotes

How to Get Dagr

Dagr is a limited time Hero who can be pulled from a Mythic Hero Summoning event. They do not appear in regular summons.

Just so you know, immediately under "Dagr Team and Counters" it says "Teammates for Legendary Dimitri".

Register as a member and get all the information you want. (It's free!)
Login
Opinions about an article or post go here.
Opinions about an article or post
We at Game8 thank you for your support.
In order for us to make the best articles possible, share your corrections, opinions, and thoughts about "Dagr Builds and Best IVs" with us!
When reporting a problem, please be as specific as possible in providing details such as what conditions the problem occurred under and what kind of effects it had.