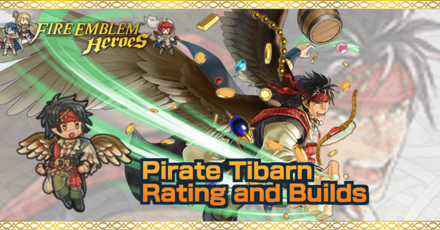 This is a ranking page for the hero Tibarn - Shipless Pirate from the game Fire Emblem Heroes (FEH). Read on to learn the best IVs (Individual Values), best builds (Inherit Skill), weapon refinement, stats at Lv 40, and more for Pirate Tibarn.

The best IVs for Pirate Tibarn are +Atk and -Res. Since he can guarantee follow-up attacks, it is best to maximize his Atk damage instead. It is also a superboon, so you should take advantage of it as much as possible. A superboon means he gets +4 in this stat instead of the normal +3 if he possesses a boon in said stat. His Res is very low and it is of less importance so it is safe to take it as his bane.

Pirate Tibarn's weapon cannot currently be refined. This section will be updated if it becomes refineable in the future!

Pirate Tibarn is a close physical attacker (range = 1). Therefore, when not accounting for the Weapon Triangle, the amount of damage he deals will be equivalent to his Atk minus the foe's Def stat.

Sky-Pirate Claw accelerates Tibarn's Special trigger. It also grants +5 Atk and inflicts -5 on foe during combat if Pirate Tibarn is not adjacent to an ally. If the same trigger condition is met, he is also guaranteed a follow-up attack.

Like other beast weapons, it grants him with a transformation bonus whenever he is adjacent to only beast or dragon allies or no allies at all at the start of a turn. The transformation bonus grants him 1 extra space of movement and +2 Atk. Take note that Pirate Tibarn is flying which means this is 3 spaces of flying movement. This makes him one of the most mobile units in the game on top of being able to dish out large amounts of damage.

Dive-Bomb 3 allows Pirate Tibarn to score a follow-up attack immediately after his attack provided that him and his foe are at least 80% HP or more. It synergizes well with Sky-Pirate Claw as it potentially enables Tibarn to pick-out units without taking damage.

As discussed above, Pirate Tibarn's kit makes him an amazing offensive powerhouse. Sky-Pirate Claw and Dive-Bomb 3 allows him to easily take out enemies with both high power and high mobility. On the other hand, Galeforce improves his mobility even more and in some situations, Pirate Tibarn can take out 2 units in one turn without refresher skills! Heavy Blade 4 drives the nail into the coffin as it adds pure damage to Tibarn's attacks and speeds-up Galeforce even more!

Pirate Tibarn sports a very low Res. This makes it easy for magic users to take him out. Be mindful of Tibarn's positioning in relation to magical units that can easily take him out.

As a flying unit, Pirate Tibarn takes 1.5x damage from bows and weapons effective on flying units. Be sure to keep them out of the range of archers and leave them to other units.
Heroes with Effective Skills

Should you Unlock Potential for Pirate Tibarn?

Tibarn - Shipless Pirate Only Appears as a 5 Star Hero!

Pirate Tibarn as a Source Hero

How to Get Pirate Tibarn / Illustrations / Voice Actor / Quotes

How to Get Pirate Tibarn

Pirate Tibarn is a limited time Hero who can be pulled from a Special Heroes Summoning Event. They do not appear in regular summons.

Register as a member and get all the information you want. (It's free!)
Login
Opinions about an article or post go here.
Opinions about an article or post
We at Game8 thank you for your support.
In order for us to make the best articles possible, share your corrections, opinions, and thoughts about "Pirate Tibarn Builds and Best IVs" with us!
When reporting a problem, please be as specific as possible in providing details such as what conditions the problem occurred under and what kind of effects it had.