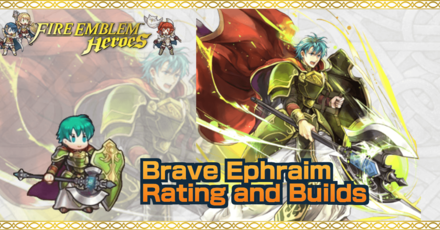 This is a ranking page for the hero Ephraim - Sacred Twin Lord from the game Fire Emblem Heroes (FEH). Read on to learn the best IVs (Individual Values), best builds (Inherit Skill), weapon refinement, stats at Lv 40, and more for Brave Ephraim.

The best IVs for Brave Ephraim are +Res and -HP. With an asset in this stat, B!Ephraim gains Res+4, allowing him to tank both physical and magic attacks more easily. However, Ephraim excels in getting follow-up attacks, a +Atk boon will also help him increase his raw firepower.

We recommend the Special Effect Refine for Garm

This special effect refine is pretty straightforward, but considering that Garm guarantees a follow-up attack, you can make good use of that +5 Atk on top of the +5 buff to all stats. It also restores 7 HP to him which is pretty useful considering Ephraim is always in the front lines. Since this upgrade also improves Ephraim's stats, that is quality 7 HP that you are getting each time this triggers. This will definitely add up, making it very hard for the enemy to take out Brave Ephraim.

Brave Ephraim is a close-range physical attacker. When the effects of the Weapon Triangle are not taken into account, the damage he deals will be equal to his Atk minus the foes's Def.

B!Ephraim has the wepaon skill Garm, which gives him a guaranteed follow-up attack when a skill like Rally/Hone is active, or when he has gained additional movement. For the most part, it requires him to have a living ally, so you cannot say he is totally without weakness, but as long as he does have a support ally, he is a threat to be reckoned with. If equipped with something like a Wave skill or Armored Boots, he can get this buff even if his allies have been disposed of, but since Armor March 3 is the easiest to use, we highly recommend it.

Accelerates special cooldown while slowing down the foe's

Ephraim has the armor-only skill Special Fighter, which will give him special cooldown charge +1 and inflict cooldown charge -1 on the foe. Being able to easily deal out special attacks while preventing those of a foe gives him a huge advantage in battle, and when combined with his guaranteed follow-up weapon skill, this skill makes for an excellent place in Ephraim's skill kit.

Thanks to the skill Armor March, Ephraim can move up to two spaces when he starts the turn with an adjacent armored ally. Mobility is often the weakpoint of an all-armor team, but with this skill, Ephraim and allies can charge through forests without losing movement, as if they were flying units.

Brave Ephraim's weapon, Garm, has access to a simple but very useful special effect refine. It improves both his offensive prowess and ability to stay in the field and soak up damage for his team.

As an armored unit, B!Ephraim will take additional damage from weapons like Armorslayer or Hammer. Be sure and check which weapons your opponents are using before getting too close.

Units who can cast armor-exclusive buffs or restore HP

Since B!Ephraim is an armored unit, he can be grouped together with other armor units that have skills such as Hone Armor to increase his power. Winter Eirika can give buffs and simultaneously restore HP, which will help keep Special Fighter active.

Allies who can take out red foes

While B!Ephraim has an excellent stat spread, but that will not save him from getting destroyed by powerful red attackers. Having a strong blue unit like Ophleia or Hector on his team to deal with this type of foe is a must for Ephraim.

Foes with armor-effective weapons and dragons

While his base Def is on the high end, B!Ephraim's base Res is only 26. A strong red mage or dragon like Lilina or Celica can quickly stop him in his tracks, so be sure to keep him out of the Danger Area when these foes are on the battlefield.

Should you Unlock Potential for Brave Ephraim?

Ephraim - Sacred Twin Lord Only Appears as a 5 Star Hero!

Brave Ephraim as a Source Hero

Brave Ephraim can be used to inherit Special Fighter 3 or Armor March 3. These are both great skills, but since B!Ephraim is quite a good unit in his own right, we recommend keeping at least one Ephraim and bulding him before foddering off or merging any duplicates.


How to Get Brave Ephraim / Illustrations / Voice Actor / Quotes

How to Get Brave Ephraim

Brave Ephraim is a Hero who can be pulled from any summon.

Register as a member and get all the information you want. (It's free!)
Login
Opinions about an article or post go here.
Opinions about an article or post
We at Game8 thank you for your support.
In order for us to make the best articles possible, share your corrections, opinions, and thoughts about "Brave Ephraim Builds and Best IVs" with us!
When reporting a problem, please be as specific as possible in providing details such as what conditions the problem occurred under and what kind of effects it had.