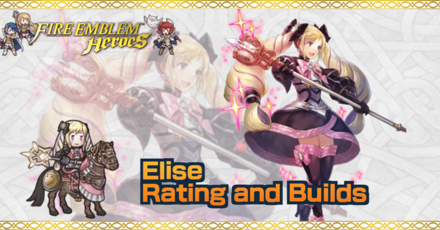 This is a ranking page for the hero Elise - Budding Flower from the game Fire Emblem Heroes (FEH). Read on to learn the best IVs (Individual Values), best builds (Inherit Skill), weapon refinement, stats at Lv 40, and more for Elise.

The best IVs for Elise are +Spd and -Res. Since Elise will find herself attacking lots of foes because of Gravity+, a +Spd can increase her already decent Spd stat and help her nail more follow-up attacks. Taking a bane in Res would balance her defenses which is ideal when it comes to survivability so it is the best bane you can take.

We recommend the Special Effect Refine for Elise's Staff

The upgraded Elise's Staff has a default access to Wrathful Staff 3 and it keeps the effect of Gravity+ that allow Elise and her allies to kite enemy units.

Additionally, it provides her with a debuff that is reliant on her positioning in relation to enemy units. It inflicts -4 Atk/Spd/Def/Res which is massive! However, keep in mind that Elise is very frail and this effect requires her to be within 2 spaces of enemy units. Be careful when utilizing this skill as Elise can be easily taken out.

A way to safely utilize this is to haver her in her in the backline as her more powerful allies take on the enemies. If her allies are in need of her debuffs, use her cavalry mobility to either heal an all or chip away at an enemy target. Make sure that upon doing so, she is within 2 spaces of the enemy whom another ally will take out shortly. This way, there will be no enemy units in range of Elise that can take her out of battle.

Elise is a ranged magic attacker (range = 2). Therefore, when not accounting for the Weapon Triangle, the amount of damage she deals will be equivalent to her Atk minus the foe's Res stat.

Elise' Gravity+ prevents target foe and foes within 1 space of target to 1 sace of movement through their next action. This is applied after Elise attacks said enemy. If combined with Dazzling Staff and a movement-assist skill from an ally such as Draw Back, Elise can continuously kite an enemy while dealing little chunks of damage. This is very useful for setting up kills for your Arena bonus units.

Can heal allies with Recover+

Recover+ is a straightforward skill that restores an ally's health whose value is equivalent to 50% of their Atk +10. It does not rely on complex conditions for its heal value so you will be always be able to heal a fair amount.

Gravity+ can be upgraded in the weapon refinery to have a built-in effect. Your 2 choices are either the Wrathful Staff 3 or the Dazzling Staff 3 effects. Since we already recommend Wrathful Staff in her B slot, you should go for Dazzling Staff. This will make her not only hit hard, but also safe from the dangers of counterattacks. At this point and with some strategy, she and her allies can definitely tear apart many Arena line ups.

Her new weapon, Elise's Staff also has access to a great special refinement effect that applies a huge debuff to an AoE around her. Read more about it in the weapon refine section!

Elise's Def only sits at 19 at Lv.40. This makes it easy for physical users to take him out. Be mindful of Elise's positioning in relation to physical users that can easily take her out.

When dealing with physical units with Gravity+, make sure that they do not have means of counterattacking and always allow Elise a safe retreat through movement-assist or refresher-assist skills.

Should you Unlock Potential for Elise?

Elise - Budding Flower Only Appears as a 5 Star Hero!

Elise as a Source Hero

We recommend using Elise to fodder off the skills Gravity+ and Recover+. However, as a cavalry hero, Elise can fill-up some niches other non-cavalry healers can. Please think carefully before fodderring her off.

How to Get Elise / Illustrations / Voice Actor / Quotes

How to Get Elise

Elise is a Hero who can be pulled from any summon.

Register as a member and get all the information you want. (It's free!)
Login
Opinions about an article or post go here.
Opinions about an article or post
We at Game8 thank you for your support.
In order for us to make the best articles possible, share your corrections, opinions, and thoughts about "Elise Builds and Best IVs" with us!
When reporting a problem, please be as specific as possible in providing details such as what conditions the problem occurred under and what kind of effects it had.