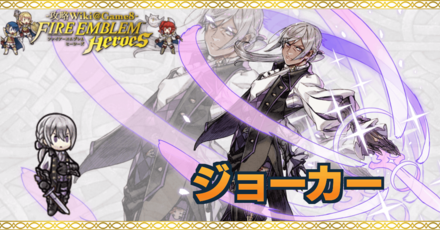 This is a ranking page for the hero Jakob - Devoted Servant from the game Fire Emblem Heroes (FEH). Read on to learn the best IVs (Individual Values), best builds (Inherit Skill), weapon refinement, stats at Lv 40, and more for Jakob.

Jakob's best IVs are +Spd and -HP. With a boon in Spd, Jakob will have an easier time gaining follow-up attacks on slower foes, and allow him to resist follow-up attacks from most foes. Although an HP bane means -4 to the stat, it is still preferable to making one of his other stats any lower.

If you are building a +10 merged Jakob, we recommend +Spd. With +Spd and 10 merges, Jakob's Spd will reach 38, making him much more adept at gaining follow-up attacks. However, if you want to increase the overall power of each attack, +Atk is a good option as well.

We recommend the Special Effect Refine for Jakob's Tray

If you want to refine Jakob's exclusive weapon Jakob's Tray, we recommend the Special Effect Upgrade. Doing so gives Jakob a +4 buff to all stats when he is within 3 spaces of an ally who has taken damage. This effect is super easy to trigger, and allows Jakob to both cast debuffs and have a stronger role in the attack phase.

Jakob is a ranged physical attacker (range = 2). Therefore, when not accounting for the Weapon Triangle, the amount of damage he deals will be equivalent to his Atk minus the foe's Def stat. Aditionally, he has various skills that can cast penalties on foes and bonuses on his allies.

Jakob's exclusive wepaon Jakob's Tray will inflict -4 to all of an opponents stats during combat. This will help assist Jakob's rather low stats and allow him to inflict damage on the foe, as well as spread debuffs to all nearby foes.

Jakob's B Skill Renewal 3 will will let him recover 10 HP at the start of every second turn. Since he can regain lost HP even without a healer on the team, taking a little damage does not stop him completely.

Jakob's stats are all pretty run-of-the-mill, or even less than average. None of his stats really stand out, and since he does not have triangle advantage on any foes, he can be difficult to really use efficiently. Additionally, he struggles to solo his enemies, so he is best used as a support unit to weaken foes.

Jakob's weapon skill will allow him to inflict Def/Res-7 on his foes after combat. An ally with a brave skill can easily rush in to attack the weakened foe for a guaranteed +14 damage and possibly finish them off for good.

Jakob also struggles against foes that have Distant Counter. If he attacks tanky foes like the Tikis, the chance of him surviving that battle is pretty slim, so even if the intention was just to debuff them, we recommend keeping away.

Should you Unlock Potential for Jakob?

We Do Not Recommend Unlocking Potential for Jakob - Devoted Servant!

Jakob as a Source Hero

Build Him or Send Him Home!

You can inherit the skill Defense +3 from Jakob, but you can also get it from 4 Star Stahl or Corrin (M), and it really is not that great of a skill to begin with. Renewal 3 cannot even be learned until Jakob reaches 5 stars, so for the most part, he is not all that good for inherit skill. If you do not want to build and use him, we recommend sending him home for feathers.


How to Get Jakob / Illustrations / Voice Actor / Quotes

How to Get Jakob

Jakob is a Hero who can be pulled from any summon.

Register as a member and get all the information you want. (It's free!)
Login
Opinions about an article or post go here.
Opinions about an article or post
We at Game8 thank you for your support.
In order for us to make the best articles possible, share your corrections, opinions, and thoughts about "Jakob Builds and Best IVs" with us!
When reporting a problem, please be as specific as possible in providing details such as what conditions the problem occurred under and what kind of effects it had.