SP Grinding | How to Get SP | Fire Emblem Heroes (FEH)

A guide on how to quickly grind SP in Fire Emblem Heroes (FEH). Read on for tips on how to make your grinding more efficient for raising Hero skills.

What is SP (Skill Points)? 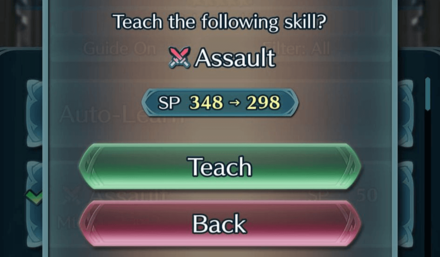 SP (Skill Points) are used to acquire new Hero skills for allies. These are needed to upgrade units and make them more effective in combat.

Best Way to Get SP

Fight foes that are within 7 levels

SP cannot be gained if your unit defeats a foe that's more than 7 levels lower than their current level.

If you're using the Training Tower, try the 8th stratum, or refresh the enemy rosters until you find enemies that have higher levels. For example:

Including all prerequisites, inheriting a passive skill requires at least 525 SP. This can be farmed quickly in the Training Tower starting from the 7th and 8th Strata, where players can get 12 SP for every four foes defeated.

At least 44 battles (about 8 Orbs) are needed to gain the SP needed to learn Inherited passive skills.

How to Get Free Orbs

The Training Tower is the most recommended place for grinding SP. Every defeated enemy gains 3 SP for the Hero in that particular map.

It's best to start with the 7th Stratum when SP grinding, since enemies are relatively weak compared to the 10th level. Keep in mind that SP cannot be obtained if the defeated enemy is 7 levels weaker than your Hero.

Gain SP with as little stamina as possible

The Tempest Trials is a stamina-efficient way to farm SP due to its challenge stages.

The Double SP Weekends events are the best ways to get more SP. This period is held from Friday to Sunday, making it ideal for raising Heros.

Double SP Weekends grant twice the normal amount of skill points when defeating an enemy or healing an ally. This means you get 3 SP for story mission battles and arena maps other than the Training Tower.

It will be easier to earn SP when characters are at lower levels. These add up over time to learn more skills as they grow.

When using the Training Tower, it's recommended to gain as much SP as possible in the lower Strata in order to keep stamina consumption to a minimum. 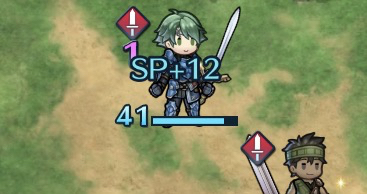 Certain Valor Skills can double the amount of SP earned through each battle, especially if they defeat enemies using a certain weapon type. These skills also stack with other SP gaining buffs, so it's possible to gain up to 12 times the skill points per sortie.

Other Ways to Obtain SP

Level grinding is the most basic way to gain SP. As the Hero gains levels, they also gain the respecting amount of skill points according to their level.

You can get a ton of SP via Merge Allies, a system that lets you combine duplicate units.

Even using lower-rarity units gains you SP when using Merge Allies. When you do so, stats will not increase, and you will only gain SP.

Staff users gain 1 SP for healing allies, and 3 SP for defeating enemies. Have them heal until farming 50 SP for learning the Assault Skill, and then have your Staff user fight enemies using it or similar weapon skills. For this method, we recommend playing on Normal Difficulty through Chain Challenges (Chapter 1~2 / 3~4).

While staff users may not deal enough damage, it's easy to make up for this with refresher characters like Ninian and Olivia, allowing them to attack multiple times per turn. If the staff unit knows Absorb, they will gain HP when attacking, so have refreshers and chip damage units.

Staff users used purely for healing gain SP at a slower pace. It's also recommended to bring support healers when training other heroes to passively gain SP while healing them, but keep in mind that you can only gain skill points 8 times per map in this manner.

This guide gives the most efficient ways to gain SP. Maxing a character to Lv.40 will ensure that they have enough SP to spare especially when learning inherited skills. Train your Heroes the best you can, while getting as much SP as possible.

Register as a member and get all the information you want. (It's free!)
Login
Opinions about an article or post go here.
Opinions about an article or post
We at Game8 thank you for your support.
In order for us to make the best articles possible, share your corrections, opinions, and thoughts about "SP Grinding | How to Get SP" with us!
When reporting a problem, please be as specific as possible in providing details such as what conditions the problem occurred under and what kind of effects it had.