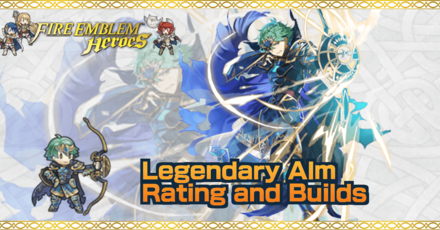 This is a ranking page for the hero Alm - Saint-King from the game Fire Emblem Heroes (FEH). Read on to learn the best IVs (Individual Values), best builds (Inherit Skill), weapon refinement, stats at Lv 40, and more for Legendary Alm.

Legendary Alm's best IVs are +Spd and -Res. Since his special increases with a higher Spd, a raised Spd IV means he will deal more total damage. With his low base Res stat, it is best used as a dump stat, making it ideal for a flaw.

Legendary Alm’s base skill set is very synergistic, so he is still viable even without much investing too much into inherit skill. Equipping him with the assist skill Draw Back and the sacred seal Flashing Blade will further enhance his ability.

This build makes use of Ardent Sacrifice and the B Skill Desperation. With his poor defensive stats, Alm is in danger of getting taken down by enemy counterattacks, so you should prevent them as much as possible. Ardent Sacrifice will allow Alm to reach the HP threshold for Desperation, making them synergistic and easy to make use of in battle.

Spd is naturally high, so Darting Blow 4 is highly synergistic. If you feel that his Spd does not quite cut it, equipping the seal Phantom Spd should allow him to safely prevent most enemy counterattacks.

Alm is a ranged physical attack phase unit. Therefore, when not accounting for the Weapon Triangle, the amount of damage he deals will be equivalent to his Atk minus the foe's Def.

Legendary Alm's exclusive weapon Luna Arc deals an additional 25% of the foe's Def when he initiates combat. The Def stat used for calculation will include any alterations present during combat, so Surtr's Def would be calculated as 51 when attacking him. Alm's strength lies in being stronger against foes who have higher Def stats.

Lunar Flash, Alm's special skill, treats the foe's Def or Res as if reduced by 20%, and tacks on 20% of his Spd as damage. Combined with his Passive A Skill Darting Blow will further increase this total. Since it only has a cooldown count of 2, equipping Alm with Flashing Blade will make his special activate on follow-up attacks.

Legendary Alm has low base stats in both Def and Res, so he is a bit fragile against opponents' attacks. Heroes with Atk that is slightly above average can deal near lethal damage to Alm or even OKO him. Therefore, use caution so that he does not step into an area where enemies can take him down.

Heroes to Team with Alm

Legendary Alm is a bow-wielding infantry unit, so he cannot receive any movement type-exclusive buffs. Therefore, you should edit your team with allies who can raise an ally's stats while providing additional movement like Legendary Azura or Flying Olivia, or Drive-type skills that buff allies from 2 spaces away such as Kaden.

Heroes Who Are Strong to Manaketes

Since Alm is a bow-wielder, so when he gets attacked by a dragon damage will be calculated with the lower of his Def or Res. With his low defensive stats, an attack from a dragon can be lethal, so you should keep some heroes such as Legendary Marth or Julia in the same team who can easily defeat Manaketes.

Legendary Alm shines in the attack phase, so it is not ideal for him to take attacks. When he does take an attack, he is likely to fall before being able to dish out a counterattack, so be wary of the danger zones of high powered mages with great mobility such as Reinhardt or Nino.

Alm - Saint-King Only Appears as a 5 Star Hero!

Legendary Alm as a Source Hero

How to Get Legendary Alm / Illustrations / Voice Actor / Quotes

How to Get Legendary Alm

Legendary Alm is a limited time Hero who can be pulled from a Legendary Hero Summoning event. They do not appear in regular summons.

Register as a member and get all the information you want. (It's free!)
Login
Opinions about an article or post go here.
Opinions about an article or post
We at Game8 thank you for your support.
In order for us to make the best articles possible, share your corrections, opinions, and thoughts about "Legendary Alm Builds and Best IVs" with us!
When reporting a problem, please be as specific as possible in providing details such as what conditions the problem occurred under and what kind of effects it had.