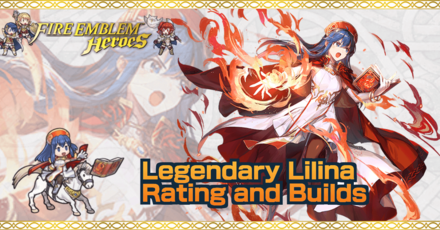 This is a ranking page for the hero Lilina - Firelight Leader from the game Fire Emblem Heroes (FEH). Read on to learn the best IVs (Individual Values), best builds (Inherit Skill), weapon refinement, stats at Lv 40, and more for Legendary Lilina.

The best IVs for Legendary Lilina are +Atk and -Def. A +Atk IV adds to her best asset, her very high Atk stat. It will increase the damage she deals through her attacks and her Special skill, Gifted Magic. On the defensive side, she can take lots of magic attacks as her Res is very high. However, her Def stat is abysmally low and it is not worth investing on so you might as well take it as her bane.

This is a glass-cannon build designed to give Lilina more firepower when her Special activates. You can also opt to use Heavy Blade as a Sacred Seal in case you run into teams running Guard skills that will interfere with your cooldown charge.

This is a build that uses little skill inheritance. Atk + 3 as the Sacred Seal will increase her attack, allowing for a harder hitting Special. Keep in mind that using a Seal like Death Blow will not be calculated alongside her Special.

Legendary Lilina is a ranged magic attacker (range = 2). Therefore, when not accounting for the Weapon Triangle, the amount of damage she deals will be equivalent to her Atk minus the foe's Res stat.

As a Legendary Hero, you will gain a Fire Blessing when summoning Legendary Lilina. Additionally, being a Fire-type Legendary Hero means that during Fire Seasons, other allies with a Water Blessing will receive HP+3 when they appear in battle with Legendary Lilina, and Lilina's total stats will be treated as 180. This will lead to a higher Arena Score. 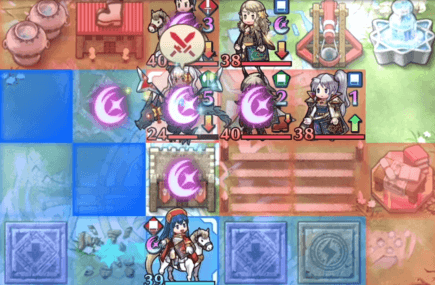 Legendary Lilina's Gifted Magic is an AoE nuke seen above and it can deal lots of damage if Lilina is able to stack tons of Atk versus the target's defensive stats. The best part about it is that she can activate it during her first attack of the match! This is because of the following reasons:

This means that you can take out a priority target at the start of the match which is very important in the Arena where Legendary Lilina will be most likely run.

One thing to keep in mind when running her base kit is the damage of Gifted Magic is calculated before battle starts, this means that Atk/Res Solo 4's bonus Atk would not participate in the calculation. To maximize the damage dealt by Gifted Magic, we recommend inheriting a skill like Life and Death 4 as it grants raw stats that are present during damage calculation.

Studied Forblaze disables unit's and foe's skills that change attack priority if Lilina is at least at 25% HP. This is very useful as it prevents Gifted Magic from accidentally triggering hostile Vantage 3 effects.

Casts a penalty on adjacent foes

She learns the skill Sabotage Res, which can inflict Res -7 on foes whose Res is 3 or more points lower than her own when that foe is adjacent to another foe. It can be difficult to trigger, but when active, the extra damage dealt can often be used to take down an foe in just one hit. Since Gifted Magic also takes into consideration the foe's defensive stats, a succesful Sabotage Res 3 activation will increase its damage too

This is great in Aether Raids as many Aether Keep layouts keep defense units very near each other. It is also great in some Arena maps where units will be forced to bundle up in tight spots.

Pulse Smoke 3 inflicts special cooldown count +1 on the target and all foes within 2 spaces of said foe. It is a powerful skill as it affects a big area. This makes Lilina a direct counter to teams relying on skills such as Infantry Pulse.

As Legendary Lilina is a ranged cavalry unit with great mobility, it makes it very easy for her to inflict Pulse Smoke on ideal areas. Though she is quite fragile in the physical end so make sure that her allies are ready to swoop in and finish the job.

Gifted Magic is weaker than other AoE specials

Gifted Magic deals less damage compared to other AoE nukes like Growing Thunder. Although it has the perk of only having a 2 count cooldown. Make sure to increase Lilina's Atk as much as possible or inflict as much debuffs on the foe's defensive stats to increase her damage.

Legendary Lilina's Spd only sits at 21 at Lv.40. This makes her susceptible to follow-up attacks. It also makes it easy for units like Freyja to reduce damage taken from her using Spd-based damage reduction skills.

Legendary Lilina takes 1.5x damage from cavalry-effective weapons like Ridersbane or Rauðrwolf+, and one blow from this type of weapon is sure to takeher down. Make sure you know what weapons you are up against before hopping too far into the line of battle!

The Álfr, Peony, Triandra, Plumeria, Mirabilis, are examples of refresher-assist units that greatly boosts Legendary Lilina's damage output. They also possess flying movement, which can keep up with Lilina's movement because of its inherent flexibility. It is always a good idea to pair Lilina with them especially in Aether Raids whether it would be on defense or offense.

Reyson and Leanne provide both heals and refreshes to Lilina so she can brawl it out in the frontlines for much longer. When transformed, they can keep up, or even lead Lilina's movement.

Physical powerhouses, preferably those who are strong against blue units

Since Legendary Lilina is a magic unit, she would need some allies to cover units that are strong in absorbing magic damage. Some great ideas are Brave Edelgard,, Brave Ike, or Surtr.

Reyson can be a good choice too if you choose to run Triangle Adept 3 for the sole purpose of covering Lilina's weakness against blue units.

For blue choices, Brave Hector sets the bar pretty high up for the the best pick.

Def is Lilina's weaker stat so blue physical units can easily exploit her. Her Spd is very bad too. Even slower blues can nail follow-up attacks on her so watch out!

Despite being a green unit, Brave Edelgard is strong enough to take on Lilina. She is very common in competitive game modes, and her kit focuses on countering tome users like Lilina. Watch out for her.

Reinhardt is of the blue attribute, and while he has to go through Lilina's monstrous Res, he can still take Lilina out at good investment levels. Some Reinhardts can score quad attacks on Lilina, too!

Lilina - Firelight Leader Only Appears as a 5 Star Hero!

Legendary Lilina as a Source Hero

L!Lilina can be foddered for the skills Atk/Res Solo 4, Sabotage Res 3, or Pulse Smoke 3. However, since she is a rare Legendary Hero, it's a good idea to keep at least one before foddering off any duplicates as she can lead your team in the Arena.

If you can get Atk/Res Solo 3 from another unit, you can inherit Atk/Res Solo 4 and another skill of choice from a single copy of Legendary Lilina.

How to Get Legendary Lilina / Illustrations / Voice Actor / Quotes

How to Get Legendary Lilina

Legendary Lilina is a limited time Hero who can be pulled from a Legendary Hero Summoning event. They do not appear in regular summons.

Register as a member and get all the information you want. (It's free!)
Login
Opinions about an article or post go here.
Opinions about an article or post
We at Game8 thank you for your support.
In order for us to make the best articles possible, share your corrections, opinions, and thoughts about "Legendary Lilina Builds and Best IVs" with us!
When reporting a problem, please be as specific as possible in providing details such as what conditions the problem occurred under and what kind of effects it had.