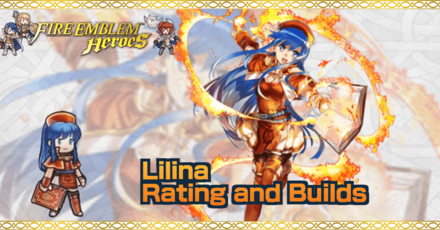 This is a ranking page for the hero Lilina - Delightful Noble from the game Fire Emblem Heroes (FEH). Read on to learn the best IVs (Individual Values), best builds (Inherit Skill), weapon refinement, stats at Lv 40, and more for Lilina.

The best IVs for Lilina are +Atk and -HP. Lilina relies solely on Atk for offense as her Spd is very low so maximizing Atk is a great idea. Her HP is of less importance so you can safely take it as a bane. If you prefer a Lilina that specialize in taking magical attacks, then you can take a bane in Def instead.

We recommend the Special Effect Refine for Forblaze

Forblaze adds the effect built-in Death Blow 3 which adds +6 Atk to Lilina whenever she engages an attack. This stacks with A slot and S slot Death Blow variants. If you are planning Lilina to be player-phased focus, stacking Death Blows is a great option to increase her firepower.

If you choose to stack this with a Death Blow 4 in the A slot and a Death Blow 3 Sacred Seal, Lilina gains +20 Atk when attacking.

Lilin is a ranged magic attacker (range = 2). Therefore, when not accounting for the Weapon Triangle, the amount of damage she deals will be equivalent to her Atk minus the foe's Res stat.

Lilina is a red mage that relies on Atk when defeating enemies. She does not score much follow-up attacks, but she is able to take out foes even without a second attack as her raw power is pretty high. This is especially true when she is invested upon. We recommend skills and seals like Death Blow 3 which increases the damage she deals when attacking.

Forblaze has the effects of Chill Res 3 built into it. Chill Res 3 inflicts -7 Res on the enemy unit with the highest Res This is very important, as it makes one of the bulkiest enemies a bit more manageable.

Another quirk of Forblaze is that they affect enemies regardless of where Lilina is is. A -7 Def debuff that is always active cannot be underestimated.

The special refinement effect for Forblaze gives Lilina a built-in Death Blow 3. We discuss it in detail in the weapon refine section of this article. Click here to go to said section!

Spur Atk 3 grants a +4 Atk to allies who are in combat that are adjacent to Lilina. It's a flexible skill that doesn't need to meet its requirements at the turn start, so you can adjust the positioning of Lilina and her allies before attacking foes.

Lilina is by no means a Res tank, but she has a moderately high Res stat that sits at at base 31. She can definitely take some attacks and counterattacks from magic foes. Be wary of her somewhat low HP though!

Lilina's Spd only sits at 25 at Lv.40. This makes her susceptible to follow-up attacks and it makes it hard for her to score follow-up attacks on her own. This does not bother her offesnive ability much as she relies on the strength of single attacks to take out enemies. However, it hinders her ability to take punishment so look-out for units that can make quick work of her with a follow-up attack.

Bolganone possesses no secondary effect. If you choose to improve Lilina into a 5★ unit, we recommend switching over to Forblaze which is better in every aspect. It has higher Mt, has Chill Res 3 built-in and has a special refine availble.

Lilina as a Source Hero

Lilina does not possess any skills that are worth inheriting onto another unit. We recommend training and investing in her instead. If you get multiple copies of her, you can aim for a +10 merge Lilina or send her home for some Hero Feathers.

How to Get Resplendent Lilina / Illustrations / Quotes

How to Get Resplendent Lilina

Resplendent Lilina can be obtained by buying a FEH Pass. After the distribution period has ended, they can also be purchased by FEH pass subscribers.

How to Get Lilina / Illustrations / Voice Actor / Quotes

How to Get Lilina

Lilina is a Hero who can be pulled from any summon.

Register as a member and get all the information you want. (It's free!)
Login
Opinions about an article or post go here.
Opinions about an article or post
We at Game8 thank you for your support.
In order for us to make the best articles possible, share your corrections, opinions, and thoughts about "Lilina Builds and Best IVs" with us!
When reporting a problem, please be as specific as possible in providing details such as what conditions the problem occurred under and what kind of effects it had.