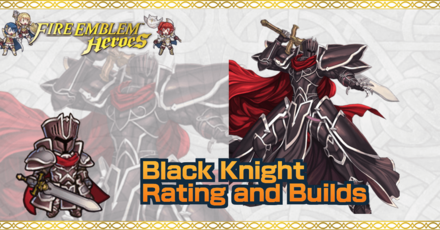 This is a ranking page for the hero Black Knight - Sinister General from the game Fire Emblem Heroes (FEH). Read on to learn the best IVs (Individual Values), best builds (Inherit Skill), weapon refinement, stats at Lv 40, and more for Black Knight.

As a hero obtainable only through Tempest Trials, Black Knight will always have neutral IVs by default. The only way to access IVs for this unit is through using Trait Fruits.

The best IVs for Black Knight are +Atk and -HP. Black Knight shines best in being an enemy phase counterattacker. A +Atk IV synergizes with his kit to effectively fill this niche. His HP stat is of less importance, so it is safe to take it as a bane.

If you prefer a tankier Black Knight that can frequently execute follow-up attacks, you can take a +Spd IV instead.

We recommend a +Spd IV when merging Black Knight to 10. At +10 Merges, Black Knight's Atk will reach such high levels that pushing it up higher is a waste, considering he has access to Black Luna, one of the most powerful special skills in the game. At this point, it would be better to opt with a +Spd IV instead to help him take less follow-up attacks and allow him to make some follow-up attacks on his own. Follow-up attacks also speeds-up special activation.

This is a set based around Steady Breath and Bold Fighter. Black Luna will trigger regardless of who initiates combat, making this build very powerful.

This build is based on inheriting the skills Fury and Vantage. Black Knight’s exclusive weapon lets him counterattack a ranged unit, and with Fury and Vantage, he will always attack first whenever a foe attacks him with less than 75% HP.

This is a high budget build that will guarantee instant activation of Black Luna due to the stacking effects of Alondite's refine, Special Fighter 3, and Swift Stance 3. You can also opt for Swift Stance 2 as his Sacred Seal to further fix his low Res.

We recommend the Special Effect Refine for Alondite

We recommend getting this refine as he will be able to activate Black Luna even faster when paired with other Special acceleration skills like Special Fighter 3.

Note: Black Knight's stats will always have no IVs.

Black Knight is a close ranged physical attacker (range = 1). Therefore, when not accounting for the Weapon Triangle, the amount of damage he deals will be equivalent to his Atk minus the foe's Def stat. Additionally, his exclusive weapon lets him counterattack from any range, and he has a powerful exclusive special skill.

Counterattack from 2 spaces away with Alondite

Black Knight's exclusive skill Alondite has the built in effect of Distant Counter, letting him counterattack ranged foes. As low mobility is one of the drawbacks of armored units, this skill allows him to take out foes at a distance despite his inherent mobility setback.

Inflict massive damage on even the toughest foes with Black Luna

Black Knight has the exclusive special skill Black Luna. This skill has the same cooldown count as Luna, but it treats the foe's Def/Res as if reduced by 80% during combat, inflicting heavy damage. This will be very strong even against blue colored foes or those with a very high Def stat, making it highly useful in any situation.

Due to the effects of his refine

His A slot skill Steady Stance 3 will give him Def +6 when the foe initiates combat. Unlike the related skills Close Def 3 and Distant Def 3, his Res stat will not increase, but having a guaranteed Def buff regardless of the weapon used is a huge plus. Black Knight already has an incredible Def stat, so Steady Stance helps to solidify him as a physical wall.

Can warp to allies who are in a pinch

His B skill Wings of Mercy 3 will let him warp to any ally with less than 50% HP. Black Knight's low mobility is seriously aided by the power to warp over such a wide area.

With his low Res stat, Black Knight is weak to magic attacks. In particular, Blue Mages like Reinhardt can wipe him out with in one fatal swoop. Keep him out of the range of mages, and in particular keep an eye on enemy blue mages.

As an armored unit, Black Knight will take significant damage from units with weapons like Armorslayer or Heavy Spear. Be wary of your foes' weapons and attack accordingly.

We Recommend You Unlock Potential for Black Knight - Sinister General!

Black Knight as a Source Hero

You may wish to use Black Knight to inherit Steady Stance 3. However, the number of obtainable duplicates of this unit is quite limited, and he will only be reobtainable through Hero Grails. Think hard before foddering him off for skills.

How to Get Black Knight / Illustrations / Voice Actor / Quotes

How to Get Black Knight

Black Knight is a limited time Hero who can be obtained as a reward for your score in the Tempest Trials. They do not appear in regular summons. After the event has ended, they can be obtained by using Heroic Grails.

Register as a member and get all the information you want. (It's free!)
Login
Opinions about an article or post go here.
Opinions about an article or post
We at Game8 thank you for your support.
In order for us to make the best articles possible, share your corrections, opinions, and thoughts about "Black Knight Builds and Best IVs" with us!
When reporting a problem, please be as specific as possible in providing details such as what conditions the problem occurred under and what kind of effects it had.