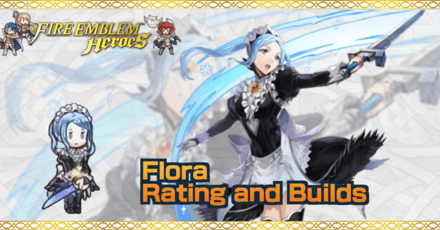 This is a ranking page for the hero Flora - Cold as Ice from the game Fire Emblem Heroes (FEH). Read on to learn the best IVs (Individual Values), best builds (Inherit Skill), weapon refinement, stats at Lv 40, and more for Flora.

Flora's best IVs are hands down +Atk and -Spd. Her weapon allows her to score follow-up attacks on specific units and her Spd is very unreliable so its best to rely solely on Atk to take out foes. Because of this, Flora is best taking a bane in Spd.

This build aims to give Flora the highest score possible in the Arena with her refined weapon. A budget option if you have no Ruptured Sky or Blue Flame (both will score the same while also having very low cooldowns), is to use Aether, however keep in mind that it will still take some time before Flora can trigger it. You can also opt for R Duel Infantry on her A slot to score more.

This is a general build using Flora's refined weapon. Leaning into her Special acceleration, we'll take advantage of her weapon, Quickened Pulse, and Time's Pulse 3 for her to trigger it on the first turn. Afterwards, Special Spiral 3 will ensure she triggers it again and again whenever she attacks.

We recommend the Special Effect Refine for Hoarfrost Knife

Hoarfrost Knife's refine gives Atk/Def-5 on Flora's target and will also apply Special cooldown charge -1 on them. This means that while Flora can trigger her Special sooner, her target will be unable to trigger their own.

We recommend getting this refine as Flora can potentially one-shot an enemy unit by debuffing them and also firing off her Special.

Flora is a ranged magic attacker (range = 2). Therefore, when not accounting for the Weapon Triangle, the amount of damage he deals will be equivalent to her Atk minus the foe's Res stat.

Huge Def buff when attacked by a melee foe

In addition to accelerating her special trigger and the normal dagger debuff effect, Hoarfrost Knife grants Flora +20 Def when she initiates combat against any melee foe. If said foe can counterattack, she makes a guaranteed follow-up attack. That is a huge buff that completely balances her defenses when attacking. This makes her a good match-up for dragonstone users that commonly have adapative damage that can exploit Flora's low Def.

Adaptive damage is when the enemy uses the lower of a foe's Def or Res. In Flora's case without Hoarfrost Knife, if she gets counterattacked by a unit with adaptive damage, she will most likely be taken out because her Def is at a pitiful 18.

If Flora initiates combat against a foe who can counterattack, she makes a guaranteed follow-up attack. This means that she can score follow-up attacks on almost every ranged unit regardless of Spd. This also means the same for melee units that have weapons like Ragnell or Alondite

Flora has access to Quick Riposte 3 which means as long as she is at 70% HP or above, she will score a follow-up attack when attacked in the enemy phase. This means she has means of scoring follow-up attacks on both phases. This further justifies our recommendation for a +Atk IV!

Atk/Res Solo 3 grants +6 to Atk/Res when Flora is not adjacent to allies. This adds to her offensive and defensive ability making her a good match-up to many magic-using foes.

Hoarfrost Knife's refine activates when Flora initiates combat or is within 2 spaces of an ally. She will inflict Atk/Def-5 on an enemy unit and will also inflict Special cooldown charge-1 on them per attack.

This means that not only can she potentially one-shot them because of her accelerated Special and the debuffs she's applying, but also take less damage due to slowing down her opponent's Special and decreasing their Atk.

Weak against ranged physical units in the enemy phase

Because the +20 Def is only granted in the player phase, Flora's Def only sits at 18 when attacked in the enemy phase. This makes her extremely vulnerable to dagger and bow users. Be mindful of this and keep her away from ranged physical units!

Weak against adaptive damage in the enemy phase

For the same reasons that she is weak to dagger and bow users, she will be weak to dragonstone users with adaptive damage in the enemy phase as well. Try to take them out in the player phase as to not to have threats against Flora in enemy phases!

Flora - Cold as Ice Only Appears as a 5 Star Hero!

Flora as a Source Hero

Flora can be used to inherit the skill Atk/Res Solo 3. However, Flora is one of the few red dagger units in the game. This allows her to fill-in specific niches in your team compositions. We recommend training and building her instead.

How to Get Flora / Illustrations / Voice Actor / Quotes

How to Get Flora

Flora is a Hero who can be pulled from any summon.

Register as a member and get all the information you want. (It's free!)
Login
Opinions about an article or post go here.
Opinions about an article or post
We at Game8 thank you for your support.
In order for us to make the best articles possible, share your corrections, opinions, and thoughts about "Flora Builds and Best IVs" with us!
When reporting a problem, please be as specific as possible in providing details such as what conditions the problem occurred under and what kind of effects it had.