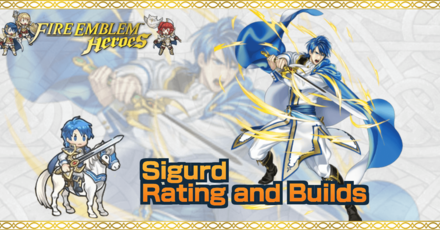 This is a ranking page for the hero Sigurd - Holy Knight from the game Fire Emblem Heroes (FEH). Read on to learn the best IVs (Individual Values), best builds (Inherit Skill), weapon refinement, stats at Lv 40, and more for Sigurd.

The best IVs for Sigurd are +Spd and -Def. A higher Spd stat allows Sigurd to prevent follow-up attacks against him and helps him make follow-up attacks on his own. This boosts both his offensive and survivability capabilities. With this IV at Lv. 40, he will reach 35 Spd—a decent level. Taking a bane in Def will balance his stats and that is ideal for survival. Thus, it is the best bane he can take. You should still aim for a merge to get rid of it though, as Sigurd is mainly a defensive unit.

We recommend a +Spd IV when merging Suigurd to 10. This is for the same reasons as above. At this point, he will have a Spd of 39. If you prefer, you can also go for a +Atk IV if you plan to supplement his Spd using buffs etc.

We recommend the Special Effect Refine for Divine Tyrfing

An upgrade to Divine Tyrfing adds a ton of Atk/Def to Sigurd when at least at 50% HP or above. The special effect refine grants him another batch of Atk/Def and a guaranteed follow-up attack. This is a great upgrade to Sigurd and improves both his defensive and offensive abilities.

Sigurd is a close physical attacker (range = 1). Therefore, when not accounting for the Weapon Triangle, the amount of damage he deals will be equivalent to his Atk minus the foe's Def stat.

Despite Sigurd's low Res stat, Divine Tyrfing reduces the damage taken from the first attack of a tome users. This means that unless the enemy scores a follow-up attack on Sigurd, he will be taking very little damage from this unit type. Fifty percent (50%) damage reduction is so powerful that Sigurd can even survive an attack from the mighty Reinhardt's Dire Thunder. That says a lot because Reinhardt is known to be one of the most powerful tome attackers in the game and he posseses an attribute advantage over Sigurd!

Though Sigurd's ability to survive an attack from Reinhardt is not solely because of Divine Tyrfing. His weapon only halves the damage taken from the first attack. This means that Reinhardt's second attack will still deal full damage. This is where his C skill, Crusader's Ward, kicks-in. His C skill reduces the damage taken from consecutive ranged attacks by 80%. This means that he only takes 35% of Reinhardt's wrath. Thankfully for him, these skills also work against other units making Sigurd susceptibly durable despite his low Res stat.

Sigurd has access to a powerful special effect refine. It improves both his offensive and defensive ability. You can read more about it in the weapon refine section.

Close Def 3 grants +6 Def/Res is Sigurd is attacked by a sword, axe, lance or dragonstone unit. This makes him a decent tank unit in the enemy phase if all enemies are of said unit types. It patches his weakness of having a low Res against dragonstone units. This skill does not affect tome and staff users, but Divine Tyrfing reduces the damage taken from magic users. With that said, watch out for staff users with Wrathful Staff upgrades as Sigurd does not possess any defense mechanism against staff damage.

Sigurd's C skill, Spd Smoke 3 inflicts -7 Spd to units within 2 spaces of target through their next actions. If you are able to take out the unit that you attacked, the units affected will have a hard time executing follow-up attacks on Sigurd and his team. It also makes it easy for your allies to swoop in and score follow-up attacks on these affected units. This gives your teams a huge offensive and defensive advantage. Because Sigurd is a cavalry unit with decent defenses, he will not have a hard time diving deep into enemy territory and spreading Spd debuffs.

Weak to dragonstone and staff units

Sigurd has a very low Res stat, but Close Def 3 grants him +6 Res against dragonstone units—this is but a band-aid solution as 26 Res would not save you from the more powerful dragons. Additionally, this skill does not work against tome and staff users. However, Divine Tyrfing and Crusader's Ward provide defensive mechanisms against tome users so keep Sigurd out of the way of powerful dragonstone units and staff users with the Wrathful Staff effect. Use his high mobility to grant him advantageous positioning!

Sigurd takes 1.5x damage from cavalry-effective weapons like Ridersbane, and one blow from this type of weapon is sure to take him down. Make sure you know what weapons you are up against before hopping too far into the line of battle!

Should you Unlock Potential for Sigurd?

Sigurd - Holy Knight Only Appears as a 5 Star Hero!

Sigurd as a Source Hero

Sigurd can be used to inherit the skills Close Def 3 or Spd Smoke 3. However, Sigurd is a powerful hero that provides lots of value to your team. Please think carefully before fodderring him off for these skills.

How to Get Sigurd / Illustrations / Voice Actor / Quotes

How to Get Sigurd

Sigurd is a Hero who can be pulled from any summon.

Register as a member and get all the information you want. (It's free!)
Login
Opinions about an article or post go here.
Opinions about an article or post
We at Game8 thank you for your support.
In order for us to make the best articles possible, share your corrections, opinions, and thoughts about "Sigurd Builds and Best IVs" with us!
When reporting a problem, please be as specific as possible in providing details such as what conditions the problem occurred under and what kind of effects it had.