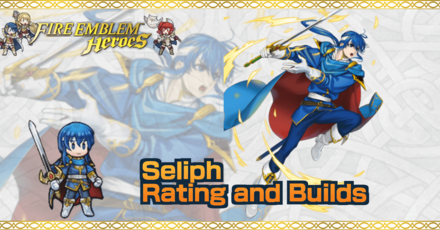 This is a ranking page for the hero Seliph - Heir of Light from the game Fire Emblem Heroes (FEH). Read on to learn the best IVs (Individual Values), best builds (Inherit Skill), weapon refinement, stats at Lv 40, and more for Seliph.

The best IVs for Seliph are +Atk and -HP. A +Atk IV adds to his already high Atk stat. This allows Seliph to defeat many foes in one turn. It is not worth trying to increase his low Spd as he can rely on Brash Assault for follow-up attacks. HP is slightly important to him as he will be tanking physical attacks but it is pretty high so he can afford to take a bane in it. You can argue that he can take a bane in Def instead as it is high as well, but it is a superbane so you will be losing more if you take the -IV in this stat.

We recommend a +Res IV when merging Seliph to 10. A +Spd IV will result in a somewhat balanced statline that is ideal for the wide range of foes that are out to get him in Aether Raids defense, the role where he does best. Balanced defenses also helps him safely get into Brash Assault range.

This build aims to amplify the effects of Seliph's default skill Brash Assault 3 to take down enemies. Pavise and Armored Blow 3 will reduce the power of a foe’s counterattack, allowing him to reliably obliterate the foe with a follow-up attack.

This build is based around the refined version of Seliph's weapon skill Tyrfing. This build will make him incredibly powerful against mage units. If you do not have an available Distant Counter to fodder, or you would like to have him counter consecutively attacking mages like Reinhardt, you can change the seal to Deflect Magic 3.

After evolution, an upgrade to Divine Tyrfing is available. It adds a ton of Atk/Def to Seliph when at least at 50% HP or above. The special effect refine grants him another batch of Atk/Def and a guaranteed follow-up attack. This is a great upgrade to Seliph and improves both his defensive and offensive abilities.

Compared to the Tyrfing special effect discussed below, this upgrade is generally better as it is useful in more situations.

Divine Tyrfing greatly increases Seliph's ability to absorb magic damage. This reduces his only weakness to his susceptibility to follow-up attacks as he can always depend on Brash Assault to score follow-ups. This upgrade makes Seliph a very tanky unit that is fit in Aether Raids teams as he will be tricky to take down. Tyrfing's special refinement is also good in Aether Raids as it can cost the enemy an additional turn to take Seliph down—a turn that can mean victory for your Aether Raids team.

Compared to the Divine Tyrfing upgrade discussed above, this upgrade is better in Aether Raids defense for the reasons discussed.

Seliph is a close physical attacker (range = 1). Therefore, when not accounting for the Weapon Triangle, the amount of damage he deals will be equivalent to his Atk minus the foe's Def stat.

Seliph can choose from an upgraded Tyrfing or evolve it into a Divine Tyrfing as his upgrade choices. Both make him bulkier and hard to take out making him a great unit in Aether Raids. To read more about these two weapons, click here!

Seliph's HP and Def sit at 47 and 30 respectively. This allows him to survive huge amounts of punishment. However, his Spd is very low so high Spd attackers might be able to take him out. If you are able to patch his susceptibility to follow-up attacks somehow, he can make for a great tank.

Seliph's Res only sits at 2 at Lv.40. This makes it easy for magic users to take him out. Be mindful of Seliph's positioning in relation to magical units that can easily take him out.

Additionally, his Spd is very low as well. Many high-Spd attackers can take him out with a follow-up attack. If you are in a competitive game mode like Aether Raids, always be mindful of your foes' stats in relation to your units.

Needs Investment to be Competitive

Seliph's base kit is rather outdated and he will have a hard time dealing with newer units in modes such as the Arena. If you plan to use him competitively, we strongly recommend using the Inherit Skill feature to boost his power before doing so. Some build recommendations can be found here!

Should you Unlock Potential for Seliph?

We Recommend You Unlock Potential for Seliph - Heir of Light!

Seliph as a Source Hero

Seliph does not posess any skills that are worth inherting onto another unit. Thus, we recommend training and building him instead. In the event that you get multiple copies of Seliph, you should just create a merged unit off of the one with the best IVs.

How to Get Seliph / Illustrations / Voice Actor / Quotes

Seliph is a Hero who can be pulled from any summon.

Register as a member and get all the information you want. (It's free!)
Login
Opinions about an article or post go here.
Opinions about an article or post
We at Game8 thank you for your support.
In order for us to make the best articles possible, share your corrections, opinions, and thoughts about "Seliph Builds and Best IVs" with us!
When reporting a problem, please be as specific as possible in providing details such as what conditions the problem occurred under and what kind of effects it had.