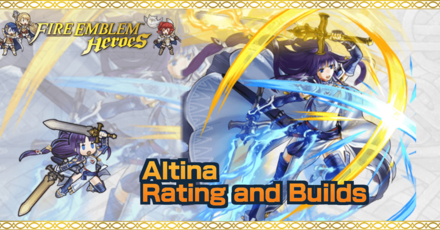 This is a ranking page for the hero Altina - Dawn's Trueblade from the game Fire Emblem Heroes (FEH). Read on to learn the best IVs (Individual Values), best builds (Inherit Skill), weapon refinement, stats at Lv 40, and more for Altina. 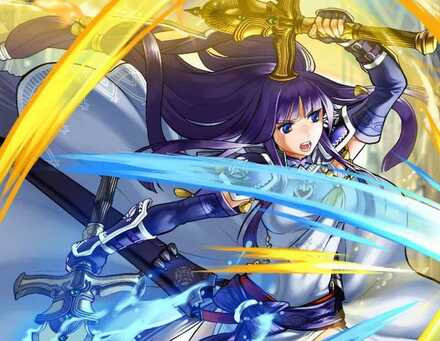 Altina's best IVs are +Atk and -Spd. With her low Spd of only 20, Altina does not get follow-up attacks this way, but instead relies on her exclusive weapon, which always grants her an extra attack. Since this is the case, the ideal stat to maximize would be Atk, so that you can increase her damage output.

We recommend a +Atk IV when merging Altina to 10. This is for the same reasons as above! Atk is Altina's bread and butter, offense and defense!

This is an offensive build for Altina. Death Blow is great for attacking twice, allowing her to deal heavy damage when initiating combat. In addition, she can attack the foes who have been debuffed by Sturdy Blow

This is the basic build for Altina with some slight improvements. All of her default skills are excellent, so she can be ready for battle with the addition of an assist skill and seal. When her damage has decreased, the effects of Brazen and Vantage will trigger, enabling her to counterattack with a heavy blow before a foe can even strike, and increasing her effectiveness during enemy phase.

Altina is a close ranged physical attack phase unit. Therefore, when not accounting for the Weapon Triangle, the amount of damage she deals will be equivalent to her Atk minus the foe's Def.

Exclusive weapon that can counter at any range and attack twice

Altina's weapon Ragnell·Alondite is not just another Distant Counter-built in weapon, but it also lets her attack twice even when the foe initiates combat. Therefore, she is capable of dealing massive damage both when initiating combat and when defending.

Altina's Special Skill Twin Blades will boost damage by 40% of the foe's Res stat, and nullify any non-special skill that reduces the damage a unit takes. In particular, this will be good against weapon skills like the refined form of Urvan held by Brave Ike, who is commonly used in Aether Raids.

Altina's other exclusive skill Ashera's Chosen will nullify bonuses that are effective on flying units. Ragnell·Alondite lets her counterattack ranged foes, so this skill is excellent when paired together with a flying type team.

Additionally, if Altina is only around Beast/Dragon allies (or no allies), she will gain Atk/Def+6 durinc combat. This will stack with skills like Atk Tactic, making it an excellent addition to certain teams.

With her subpar Spd stat, Altina is very prone to taking follow-up attacks. When threatened with multiple attacks in a row from foes, it will be better to play defensively and avoid their attacks instead of trying to tank them.

Refresher-assist supports that can help her deal more damage

Altina is mainly an offensive unit so those that grant her additional actions, and increase the damage she deals are great compliments to her. The Álfr are great examples of these.

Magical powerhouses, preferably those who are strong against blue units

Altina needs a partner to cover foes whom she will have trouble dealing with as a red physical unit. Flying Nino, Brave Celica, and Fallen Lyon are good choices.

Naga shares the same season Aether Raids season with Altina, plus she is a magical blue unit who can cover some matchups for her. Additionally, she carries the exclusive Divine Fang that grants Altina valuable dragon-effective damage.

This Micaiah alt has access to Dawn Suzu which disables Vantage 3 allowing for easy hits on Altina.

The blue units listed above can take out Altina in one phase. If you can take her out before she can take advantage of Vantage 3, that would be ideal as her attacks coupled with Vantage is her main defense mechanism. You don't need very fast units to take her out as her Spd is very low.

Altina cannot proc Vantage on units she cannot land a counterattack on. This makes sweepers like Díthorba a counter to her. A unit like Summer Byleth (F) can be a counter too as she commonly runs Windsweep 3.

This is for the same reason that Hoshidan Summer Micaiah is in this list. This useful, flexible Sacred Seal can be slapped onto any unit to neutralize the effects of Vantage.

Altina - Dawn's Trueblade Only Appears as a 5 Star Hero!

Altina as a Source Hero

Altina can be used to inherit the skills Atk/Def Oath 3. However, Altina is an Astra-type Mythic Hero who can give you a huge upper hand in Aether Raids, so we would recommend that you train at least one before foddering off any duplicates.

How to Get Altina / Illustrations / Voice Actor / Quotes

How to Get Altina

Altina is a limited time Hero who can be pulled from a Mythic Hero Summoning event. They do not appear in regular summons.

Register as a member and get all the information you want. (It's free!)
Login
Opinions about an article or post go here.
Opinions about an article or post
We at Game8 thank you for your support.
In order for us to make the best articles possible, share your corrections, opinions, and thoughts about "Altina Builds and Best IVs" with us!
When reporting a problem, please be as specific as possible in providing details such as what conditions the problem occurred under and what kind of effects it had.