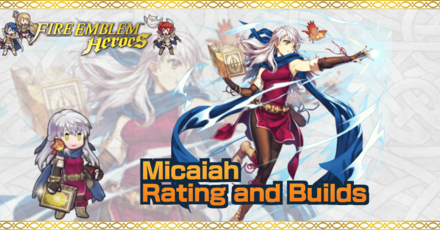 This is a ranking page for the hero Micaiah - Priestess of Dawn from the game Fire Emblem Heroes (FEH). Read on to learn the best IVs (Individual Values), best builds (Inherit Skill), weapon refinement, stats at Lv 40, and more for Micaiah.

The best IVs for Micaiah are +Atk and -HP. Since she has a 1.5x damage multiplier against 2 kinds of units, taking a +Atk stat is best for her as it maximizes said multiplier. Her HP is of less importance so it can be safely taken as her bane.

We recommend a +Atk IV when merging Micaiah to 10. This is for the same reasons as above. With a huge raw Atk stat, she can take lots of cavalry and armored foes with 1 blow! If you prefer a more durable Micaiah, you can go for a +Res IV instead.

We recommend the Special Effect Refine for Thani

The special effect for Thani grants +5 Atk/Res to Micaiah and guarantees her a follow-up attack provided that she is at least at 50% HP or above. Not only is it a powerful effect especially against magic users, but it takes away the need for a skill like Quick Riposte 3.

In our Budget Micaiah build, we usually recommend a Quick Riposte 3 Sacred Seal, but if you are able to specially refine Thani, you can go for other Sacred Seals such as Death Blow 3! This increases Micaiah's overall power.

Make sure to partner her up with healers to always meet the trigger condition.

Micaiah is a ranged magic attacker (range = 2). Therefore, when not accounting for the Weapon Triangle, the amount of damage she deals will be equivalent to her Atk minus the foe's Res stat.

Thani is strong against both armored and cavalry units

Thani deals effective damage against both armored and cavalry foes. This grants Micaiah many favorable match-ups! As seen above, she can easily deal with the dreaded Idunn in most situations.

In addition, Thani reduces the damage she takes from ranged armored and cavalry foes by 30%!

Thani has access to a special effect refine that provides her not only with extra stats, but it also guarantees follow-up attacks as well! Read more about it in the weapon refine section.

Micaiah's Sacrifice converts the penalties on an ally into bonuses and restores their HP by an amount relating to Micaiah's current HP.

This multi-effect skill is very helpful and can save your team in many situations! When playing Micaiah, keep in mind that you have a skill like Sacrfice—a skill that can turn the tide of battle when used with the proper timing.

Distant Def 3 grants Micaiah +6 Def/Res in combat if she is attacked by ranged foes. This means that she is a good match-up against foes who use daggers, bows, tomes and staves.

This completely stacks with the damage reduction effects of Thani.

Guard 3 inflicts special cooldown charge -1 per attack if Micaiah's HP ≥ 80% at the start of combat. This allows Micaiah and her allies to take less damage from enemies. This skill is also very helpful in Grand Hero Battles where delaying enemy specials is very important as enemy specials in those maps are very powerful.

Additionally, this makes Micaiah a great match-up for units running set-ups that make specials very quick to trigger such as Slaying Edge+ or Brave Sword as the weapon skill and slapping Sacred Seals such as Flashing Blade and Quickened Pulse for quick Moonbow or Glimmer activations

Should you Unlock Potential for Micaiah?

Micaiah - Priestess of Dawn Only Appears as a 5 Star Hero!

Micaiah as a Source Hero

Micaiah can be used to inherit the skill Distant Def 3. However, Micaiah is a powerful Blue Tome unit with strong weapon skills, so we recommend training your first copy of Micaiah first without foddering her off.

How to Get Micaiah / Illustrations / Voice Actor / Quotes

How to Get Micaiah

Micaiah is a Hero who can be pulled from any summon.

Register as a member and get all the information you want. (It's free!)
Login
Opinions about an article or post go here.
Opinions about an article or post
We at Game8 thank you for your support.
In order for us to make the best articles possible, share your corrections, opinions, and thoughts about "Micaiah Builds and Best IVs" with us!
When reporting a problem, please be as specific as possible in providing details such as what conditions the problem occurred under and what kind of effects it had.