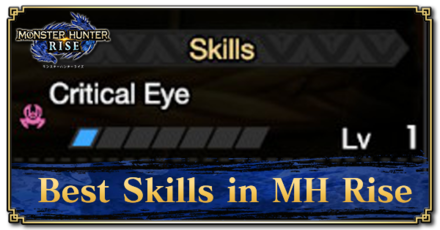 This is Game8's Tier List for skills in Monster Hunter Rise (MH Rise). Read on to see our team's Tier List and find out which are the best skills in the game!

Skills with a * on them will have an explanation section for them down below.

The best skills of them all. These skills are usable by the majority of all weapon types and are highly recommended to be included in your builds.

The A tier skills are for skills that can be used by a wide array of equipment. Some of these skills are also built changers but are reliant on some stats to work (critical element relies on affinity, mind's eye requires low sharpness, etc.)

The B-tier skills are fairly balanced. They don't offer many advantages but their effects also make them worth having if utilized properly.

The C-tier list is not entirely bad skills. They are just extremely situational but if the situation calls for them, they are great skills to have. Some of these skills also require specific setups to be used and are highly unrecommended for multiplayer.

The D-tier skills aren't entirely bad but this tier list is focused on combat capabilities. D tier skills are skills that can't be used for combat but if you have a different agenda (gathering or roaming the map specifically), these skills will be great to have.

These skills are still being tested, please wait for our final rating for these skills as we try to learn and maximize their effects.

Despite losing the affinity bonus, Attack Boost is still a great skill to have for all weapons. It allows you to deal more damage and its rank 4 and higher grants a % damage bonus so make sure to at least get a level 4 Attack Boost on your build!

How to Raise Affinity Stat

This might be a little bit exaggerated and useless for solo players but if you plan to play coop games in Monster Hunter, having flinch free is a must. This will prevent other players from stopping you in your tracks which can result in lost DPS or worse, an untimely death (cart).

Weakness Exploit grants a whooping 50% affinity when striking weak spots. Learning enemy weak spots is something every player will learn after playing the game for a while and this skill makes that knowledge even more useful. In comparison, the critical eye requires 7 skill levels to gain 40% affinity, with just 3 skills on Weakness Exploit, half your attacks will now deal bonus damage. Just don't forget to aim for weak spots!

While not every weapon can maximize the effects of Evade Window, weapon types with no means to guard can easily rate Evade Window as an S Tier skill. It greatly improves the player's survivability as long as you learn the attack timings of monsters. Take note that roars, tremors, and most kinds of attacks can be dodged if timed properly.

With the new addition of guard skills for tank weapons, the Offensive Guard skill's value just rose higher. Offensive Guard grants a 15% bonus damage if successfully used which is massive compared to flat damage bonuses from other skills.

With the new Silk Bind attacks, hunter's survivability has increased by folds! This means keeping your HP up is no longer a major roadblock which makes Peak Performance a great skill to have now.

You can't call yourself a support player without Wide-Range. Wide-Range's capability is immense, you can restore everyone's HP with potions, grant buffs using pills and drugs, and even heal ailments!

With the removal of the Flinch Shot, Agitator's value took a plummet down to B tier. There is now no way to keep monsters permanently enraged which turned the Agitator skill highly similar to Latent Power which can't be up 24/7 during the hunt.

Originally, builds that make use of low sharpness aren't a build worth considering. However, with the buffs to Mind's Eye which allows you to deal more damage the lower your sharpness is coupled with the new rampage skill dulling the blade, we have put Bludgeoner up to B tier. We are still testing low sharpness builds to see if Bludgeoner can rise to A rank or if the build is still unusable.

We are still testing Diversion's effectiveness a bit more so stay tuned!

Evade Extender is put lower than Evade Window due to its lower capability. With Evade Window, you can easily intercept monster attacks and stay in range by diving in. This isn't a feat that Evade Extender can use and most attacks can still be dodged with the normal dodge distance which made us put Evade Extender to B tier.

Normal/Rapid Up is a flat damage buff to bowguns. But since other damage skills like Attack Boost and Critical Eye exists which can flat out boost the bowgun's general damage output, we have put Normal/Rapid Up to the B tier. A great skill to have but there are clearly better options to have first.

Partbreaker is still a great skill for farming up those monster drops while weakening monsters. But with no targets like the Alatreon and Fatalis that require certain parts to be broken to successfully hunt, partbreaker just became less valuable than it is previously on World. We are placing Partbreaker in the B tier.

Ballistics increases ranged weapon's critical distance. Critical Distance is a set range where your weapons will still deal their normal damage. This range is particularly forgiving already and there are several ammo that makes use of close-range fight which made us put Ballistics on the C tier.

Hellfire Cloak is a very neat addition to Rise which allows you to use the positive effect of Hellfire Blight. It allows you to leave a Hellfire Blast on a location by using the Wirebug's mobility skills. This also works for Silkbind attacks that have a mobility option. It has been confirmed that a single hellfire blast can knock down monsters but the skill itself hasn't been tested for other weapon types yet to measure its full effectiveness. Stay tuned for more updates.

The more usable skill is, the higher it gets rated. Meaning if a skill can be used by a wide array of weapons, that skill is more likely to have a higher rank than its peers.

All skills have their own effects and strengths, however, some skills can do the effect of a certain skill as well to a greater extent. Skills that outshines other skills are placed higher and those that were overshadowed are placed lower.

Combat is where the main focus of the game. This is why we have focused on the skill tier list to focus on combat capability against monsters. Skills that can make your hunting easier against large monsters are rated highly and skills that are ineffective/unusable for battles are rated lower.

All Skills and Effects

In order for us to make the best articles possible, share your corrections, opinions, and thoughts about 「Skill Tier List: Best Skills in MH Rise | Monster Hunter Rise | MHR (MH Rise)」 with us!