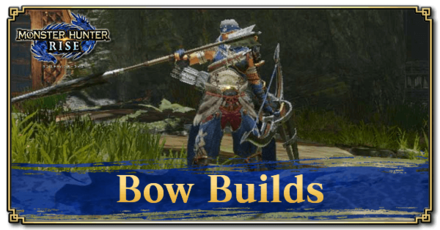 This is a guide to the best builds and equipment for Bows in Monster Hunter Rise (MH Rise) for the Nintendo Switch. Learn about the best Bows for Update 3.0, and the best Skills and Armor pieces to use with the Bows for Low Rank, High Rank, and endgame.

Rapid Build
Pierce Build
Elemental Builds
Rampage Skill Setup
Rampage Skill Setup
Best Fire Bow: Araknatorch
Araknatorch's 30% affinity rating, high elemental rating, and amazing charge shots allows it to retain its spot among the best fire element bows of Update 3.0. The only fire bow that is arguably better than this one is a properly modded Rampage Bow S.
Best Water Bow: Heaven's Manna
Heaven's Manna can also compete at the top spot against a properly modded Rampage Bow S with its high attack rating and great charge shots. Having paralysis phials and a ① slot on the weapon also contribute to its viability.
Best Thunder Bow: Rampage Bow S
Nothing comes close to a Rampage Bow S that is modded for thunder! It's charge shots and attack rating easily outclasses every other thunder element bow.
Best Ice Bow: Daora's Sagittari
Daora's Sagittarii's great stats across the board and Kushala Soul ramp up skill earns it a seat at the top of ice element bows.
Best Dragon Bow: Abyssal Gale Bow
Ibushi's tree maintains its dominance over dragon element bows with its latest addition, Abyssal Gale Bow. This bow offers great stats across the board and its elemental rating can be further improved through its Dragon Boost IV ramp up skill.

Rapid Build
Pierce Build
Elemental Builds
Rampage Skill Setup
Fire Bow: Araknatorch
While Araknatorch may fall short of the Dark Filament in terms of base attack rating, its superior elemental rating, and ridiculous Lv. 3 and 4 charge shots allow it to overtake Dark Filament in damage.
Hail of Mud
The Elemental Exploit Ramp Up skill provides a nice damage boost against water adverse monsters.
Thunder Bow: Flying Kadachi Striker
The consistent charge shots and 15% affinity rating are great in mid High Rank. This bow can also reach 31 Thunder Damage through the Thunder Boost III Ramp Up skill.
Ice Bow: Icesteel Bow I
Icesteel Bow I comes with Kushala Daora Soul, which increases your affinity as you land hits on monsters!
Dragon Bow: Azure Elder Bow II
Its base elemental rating can be raised to 21 by activating the Dragon Boost III Ramp Up skill.

Built around Sinister Soulpiercer's Rapid Level 5. This build offers a good balance of offense and utility with its skills, allowing you to dish out high damage without worrying about your stamina consumption too much.

A build for those who prefer Piercing Shots. Damage is improved through Pierce Up, Bow Charge Plus, and Weakness Exploit. General performance is improved because of Constitution and Reload Speed.

Prominence Bow II rules over Fire Elemental Bows at the climb from HR 8 to 40. Aside from its great stats, this bow also comes with the Elemental Exploit ramp up skill — Allowing you to deal even more elemental damage on specific hit zones!

Hail of Mud's stats and charge shot levels, combined with its Elemental Exploit ramp up skill, has earned it the top spot among Water Elemental Bows.

The Flying Kadachi Striker offers amazing stats for relatively cheap materials. Its rapid charge shots allow you to deal damage at a very consistent rate compared to other bows with different charge shot types. It is important to note that this bow's elemental rating can be improved by activating its Thunder Boost III ramp up skill.

With Icesteel Bow I being locked at HR30, Heaven's Glaze remains the king for the majority of the climb from HR 8 to 40. Its high base attack and elemental ratings can produce great numbers with the aid of its Elemental Exploit ramp up skill.

Ibushi's Azure Elder Bow II sits at the top of the totem pole at this stage of the game. The bow's high attack rating and charge shot levels gives it an edge amongst the competition.
Similar to Flying Kadachi Striker, this bow's elemental rating can be improved via its Dragon Boost III ramp up skill.

This build pumps as much damage as possible via affinity skills and elemental attack skills.

Always make sure you use the Elemental Attack Skill that corresponds to your bow's element before embarking on a hunt!

Magnamalo's Sinister Soulpiercer is an amazing bow that can take you all the way to the end of Hub 7★ Quests!

Arzuros' Honeypot is a great bow to start your High Rank adventures with due to its great stats and spread type charged shots. It also comes with +15 defense rating, granting you with additional survivability at this stage of the game.

Starting off with the full Izuchi set is a viable choice for Bow users because it pumps affinity into your bow while providing early stamina management via Constitution.

The Sinister Bow I boasts great stats across the board and decent coatings. Its inherent Blast Element solidifies its place as an efficient all-purpose weapon in this stage of the game.

Following up on the recommended early game set, This particular armor combination follows the same principle but takes it a step higher. Aside from increasing affinity by 20%, Latent Power Lv. 2 further improves your stamina management as it reduces stamina consumption by 30% when active.

Steel Bow is a great weapon that features great stats and an affinity arc shot for relatively cheap materials. These factors make it an all-purpose bow that is fit for any hunt in the early stages of the game.

Bows are weapons that require a lot of stamina. With this in mind, this set offers a mix of offensive and utlity skills. Critical Eye increases your affinity while Constitution reduces stamina consumption of fixed actions such as dodging and blocking. This covers most of the bow's attacks as well!

Register as a member and get all the information you want. (It's free!)
Login
Opinions about an article or post go here.
Opinions about an article or post
We at Game8 thank you for your support.
In order for us to make the best articles possible, share your corrections, opinions, and thoughts about "Bow Builds and Best Equipment | Monster Hunter Rise" with us!
When reporting a problem, please be as specific as possible in providing details such as what conditions the problem occurred under and what kind of effects it had.