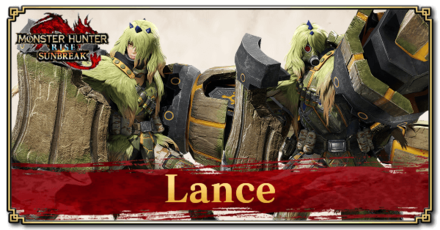 This is a guide to the Lance, a weapon in Monster Hunter Rise: Sunbreak (MH Rise). Read on to learn about new Lance controls and combos, how to use the Lance charge and the Lance Dash Attack as well as details on Lance Switch Skills.

Lance received a lot of buffs in this patch - from increased damage, elemental scaling, easier Insta-Block execution, and Twin Vine costing 1 Wirebug - Lance is awesome to use now!

It's now a very comfortable weapon to use damage-wise, albeit still can't keep up gameplay-wise with other weapons as all weapons have counterattacks now like the Lance.

The hunter launches to the air with a Wirebug then thursts the Lance downward. The upward strike can also stun the monster. The downward thrust hits multiple times.

This Switch Skill allows the hunter to charge forward with the shield. This can immediately be followed up with thrusting attacks.

Not introduced in any trailer, Sheathing Retreat is an additional Silkbind Attack added to the Sunbreak Expansion.

This silkbind attack is a quick and easy way for Lance users to create a gap between the monster and themselves, especially when they're in a huge disadvantage.

How Good is the Lance?

The Lance received a significant damage buff across all its moves and that's a welcome addition but its new moves and Switch Skills however, have been lackluster at most.

The improvements on Insta-Block though gives Lance an easier wirebug-free option of countering moves. Shield Tackle gives the Lance a quick combo-reset tool that improves the weapon's overall DPS. 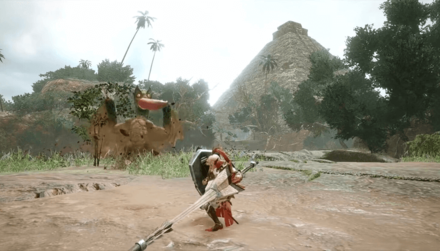 One of the Best Weapons for Guarding

The Lance is top tier when it comes to guarding. It can tank almost all monster attacks with minimal damage to the hunter!

Can Counterattack After Guarding

The Lance can also counterattack after absorbing damage from a guard. Use this wisely for maximum damage!

Being physically long gives Lance the advantage with reach. It can easily reach heads position high up like Anjanath or Jyuratodus!

This is further improved by the new Silkbind Attack for the weapon which was added in Sunbreak. Using Skyward Thrust sends the hunter high in the sky for more verticality and strikes down vertically, which can be used both as an evasion option and and as an attack! 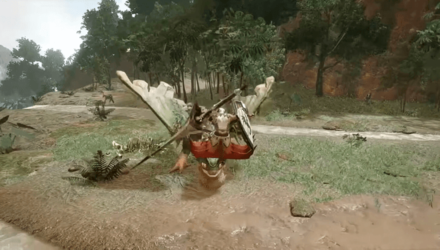 The Lance provides poor mobility while hunting. When unsheathed, the Lance will slow down the hunter to a crawl leaving him unable to properly reposition.

The Lance also does not have any attack that dishes high damage. It relies on consistent poke damage while guarding monster attacks.

When playing with allies, Lance users can be tripped by certain attacks (from Long Swords and Gunlances, for example). Because of this, Lance users have to incorporate the Flinch Free skill into Lance builds.

The user launches themselves with a Wirebug up in the air and falls straight down, dealing multiple hits to any monster that is unfortunate enough to catch the fall. This launch can be used to dodge vertically, which can save the user from hard-hitting swipe attacks.

This move costs one Wirebug charge and has a medium recovery speed.

The first action of the Twin Vine Silkbind Attack tethers you and a target where you will be able to walk a few feet away from the monster. The wire will turn red upon reaching the max distance before it breaks.

While connected, you can freely jump back towards the tethered monster to close the gap faster.

Anchor Rage is a Silkbind Attack that increases your attack damage when hit by a monster's attack. The attack increase also depends on the power of the attack received!

A quick two-step move, Spiral Thrust allows the user to change their position and aim for a counterattack.

The attack starts with a counter, using the shield to parry an attack, then sends the user flying forward with the Wirebug. This can catch targets off guard and leave them vulnerable.

If an attack is successfully countered using Spiral Thrust then a temporary attack buff will be granted and the Lance will glow for the duration.

Lance users are not supposed to sheath their weapons because they need to guard everything. However, there are certain instances that you need to reposition and so that's when you'll use Sheathing Retreat. It's a very safe and quick retreat option for when your Guard is not gonna cut it anymore!

A two-step Lance dash maneuver that blocks an incoming attack from the start and allows you to dash attack twice with your Lance. We recommend getting this because it helps with Lance's lack of mobility.

This skill replaces your usual Lance dash attack with a dash while holding your shield. Attacks met while dashing will be blocked and you will continue dashing. You can end the dash with a Shield Bash for big blunt damage. You can't use it for a long time like the Lance Dash though, and you can only dash for a short while with the shield.

The greatest counterattack move by the Lance. Your hunter will swing the shield in an arch anticipating an attack. Time it properly before it hits and you can have the opportunity to follow it up with a Cross Slash (A or Right Click).

A shorter, guard dash with the shield up. This does not allow you to reposition as well as Guard Dash but the move can block attack and deal stun damage when it hits monsters. Use this skill when you're fighting slow monsters that does not move too much.

However, you can combo this move with Twin Vine to keep yourself near the monster without relying on Guard Dash.

A great damage tool from the Lance, this attack pulls you upward then pulls you back down the earth to deal multiple instances of damage. Use this to deal a great deal of damage to enemies!

Lance users are not supposed to sheath their weapons because they need to guard everything. However, there are certain instances that you need to reposition and so that's when you'll use Sheathing Retreat. It's a very safe and quick retreat option for when your Guard is not gonna cut it anymore!

This is the bread-and-butter move of the Lance. As a Lance user, you can mix any of the two types of thrusts consecutively up to three times. After three thrusts, the motion will reset unless you cancel it using a cancel thrust (zR + A or MB4 + Right Click) or by dodging (B or Space).

This is important to know this because when you don't cancel after three thrusts, the downtime before you can attack again is very long.

The Lance's Backstep distance has been improves in Rise and the distance covered by the move is increased. This helps in mobility and avoiding attacks.

Doing a Wide Sweep with the Lance allows you to charge the attack before it releases automatically. This is Lance's most powerful attack so you should use it at all times when there is an opening.

Hold zR or Mouse Button 4 to guard. You can slowly move around while holding your shield up high.

If used while guarding, the attack will be executed after a short duration, unless you are hit with an attack wherein you will perform a High Thrust instead.

If used while Power Guarding, the attack will be immediately used.

The Power Guard is a returning move that allows you to greatly withstand and reduce the stun time of attacks. It is one of the best counter tools of the Lance against enemy monsters if timed correctly, although it uses up your stamina while it is active.

To Power Guard, charge up a Counter-thrust while guarding and press zR + B or Mouse Button 4 + Space.

While Power Guarding, press X or Left Click to execute a Leaping Thrust, which is good for closing gaps between you and the enemy.

Leaping Thrust can also be used after using Guard Dash by pressing A or Right Click. This can be used to execute combos.

One of the main mobility moves in the Lance's arsenal, Guard Dashing is an important move to know if you want to learn Lance. This not only closes the gap between you and the monster, but the initial Guard Dash motion (where the shield is in front of you) can also block enemy attacks!

While in the air or unsheathed, you can execute a Lance Dash Attack (or Lance Charge as called by some) that enables you to dash forward. You can change direction ever so slightly using the Left Analog Stick and hop sideways using B.

You will consume stamina as you dash and will stop when you run out, hit a wall, or execute an attack by pressing X or Left Click.

Recommended Combos for the Lance

This is Lance's bread-and-butter move. As a Lance user, you will use this combo more often than not. The consistency and frequency of using this combo will maximize your damage as a Lance main!

This is a combo that allows you to connect Guard Dash by striking after Power Guard. This can be used even when an enemy is attacking you!

Tips on How to Use the Lance

Stay Beside the Monster 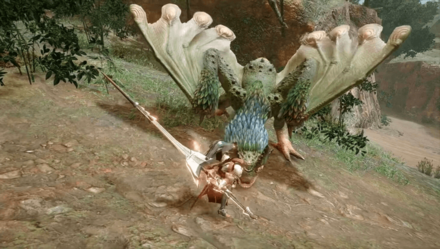 The power of the Lance relies on consistent poke damage so you must be beside the monster at all times. Learning to play very aggressively while knowing when to guard is the sign of a good Lance player.

Use Anchor Rage When Possible 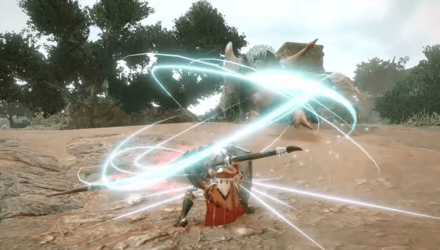 The Anchor Rage gives the Lance a much-needed attack boost. Use it whenever possible to mitigate the low DPS disadvantage! 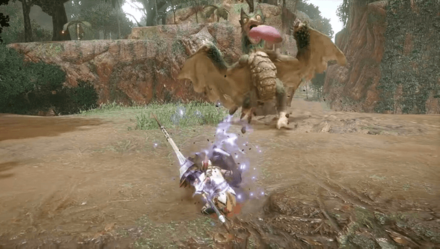 It is not advisable to sheathe your weapon every time you reposition yourself. Use Lance's guard to tank enemy attacks to maximize your DPS!

Make Sure to Always Use Charged Sweep When Possible

This is one of the highest damage moves from Lance. When there is an opening, charge up your Lance and sweep away! The DPS boost from this move is too good to pass up.

Make Full Use of the Counter-thrust 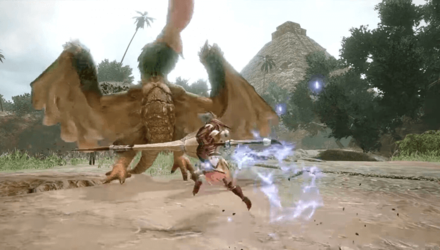 The Lance has the capability to counter-thrust after successfully guarding against an attack. As mentioned earlier, consistent damage is the key to using the Lance so counter-thrusting is one way to convert defense into offense!

Sheathe Your Weapon Only When Needed! 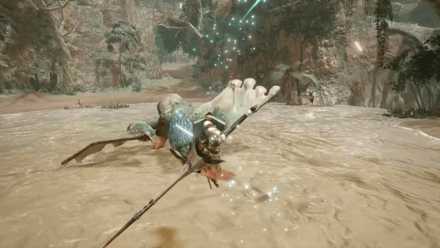 If you need to reposition, always do it while the Lance is sheathed. When unsheathed, the Lance reduces you to a crawl making moving painfully slow. To reposition while unsheathed, use Twin Vine to dash towards the monster!

The backstep distance after an attack is increased therefore you can reposition more easily.

You Can Execute a Charged Sweep

A new move that opens up new high damage opportunities for the Lance. Use this whenever possible like when the monster is downed, trapped, stunned, or asleep.

In order for us to make the best articles possible, share your corrections, opinions, and thoughts about 「Sunbreak Lance Guide: Combos, Controls and Moveset | Monster Hunter Rise」 with us!