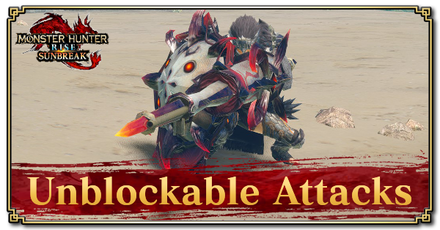 Some monster attacks cannot be blocked in Monster Hunter Rise (MH Rise): Sunbreak. Keep reading to learn all the attacks that require Guard Up and moves that are completely unblockable!

Guard Up is a skill that allows guarding against attacks that would otherwise be unblockable. Each level of Guard Up only further reduces the amount of damage taken, so even Lv 1 is enough to block all these attacks.

All the clips below show these attacks being blocked with Lv 3 Guard Up active.

Unlike most of Great Wroggi's poison attacks, its long-range breath attack requires Guard Up to block and avoid getting poisoned.

Tetranadon's pin attack while expanded cannot be blocked normally. Successfully blocking it with Guard Up will cancel the rest of the attack.

The large rock Tetranadon uses for one of its attacks also requires Guard Up to block.

While expanded, the Tetrana-splash can't be blocked normally. This also applies to the Master Rank version where it does it twice.

Most of Khezu's electric attacks can be guarded against. Its Triple Electric Breath is the sole exception.

All variations of Basarios' Gas Clouds cannot be blocked normally. This also includes the variation where it releases flaming gas while moving.

A good rule of thumb is that beam attacks can only be blocked with Guard Up. Basarios' fire beam is one of the first you'll encounter in the game.

While Somnacanth's Sleep Breath doesn't deal any damage, its tranquilizing effect can only be blocked by Guard Up or Sleep Resistance.

Somnacanth will sometimes pull out a red shell and break it to cause an explosion. The resulting blast can only be blocked with Guard Up.

Both Rakna-Kadaki and its subspecies have unblockable flamethrowers, notably the sweeping variations.

In Master Rank, Rakna-Kadaki gains the ability to fire two beams of fire in a row, both of which can't be blocked normally. Pyre Rakna-Kadaki also has this move.

Both web sprays will cause hunters to become threaded if they get hit by them. Blocking with Guard Up prevents this entirely.

Rajang and its Furious variant are well known for their Lightning Beam. Note that even the unenraged version can only be blocked with Guard Up.

Teostra's iconic Supernova is the only move it has that needs Guard Up to defend against it.

Wind Serpent Ibushi has a normally unblockable tail slam that creates a raised platform and an updraft of wind.

Much like Ibushi, both versions of Narwa have their own normally unblockable tail slam. If you position yourself right, you'll be right in front of her sac to continue attacking.

Homing Bolts is a move exclusive to Thunder Serpent Narwa. Without Guard Up, the only ways to avoid it are to either keep running or hide under platforms. If you're blocking it, beware that it hits multiple times, possibly causing you to cart.

Both versions of Narwa can fire powerful beams from their sac. Narwa the Allmother can fire more of these than her regular counterpart.

Garangolm only uses this attack if hunters fail to knock it out of its enraged state within a given time. Note that even non-afflicted Garangolm can perform the move.

Astalos will occasionally fire off beams from its head. Unlike its other electric attacks, this is the only move that requires Guard Up to block.

Malzeno fires off its ultimate attack if hunters fail to knock it out of its rage in time. The beam at the start of the attack and the explosive ball near the end can both be blocked with Guard Up.

Both variations of Shagaru Magala's Frenzy Beams can only be blocked with Guard Up.

Failing to knock Seething Bazelgeuse out of its seething state will allow it to finish with this move. The final body slam and the resulting explosion cannot be blocked normally.

Silver Rathalos only uses this move during its Incandescent state. While the fireballs on the ground can be blocked normally, the final, larger explosion requires Guard Up.

Lucent Nargacuga's regular tail attacks and poison spikes can be blocked normally. However, its strongest Tail Slam needs Guard Up.

When Violet Mizutsune releases its large orange bubble, it will result in a large explosion that can only be blocked with Guard Up.

All afflicted monsters can release a powerful blast called an Anomaly Burst if hunters can't pacify them in time. This normally can't be guarded, so Guard Up is recommended against any afflicted monster, even if they originally had no unblockable attacks.

Some attacks cannot be blocked at all even with Guard Up. Proper evasive maneuvers are needed to avoid getting hit by these moves.

The main blast following Magnamalo and its variant's explosive bites cannot be guarded at all. This is notably yellow in color and blows up right in front of Magnamalo. The surrounding hellfire explosions can be blocked as normal.

The first phase of Narwa's ultimate attack has her firing a powerful beam of electricity that is best avoided by standing below platforms.

Narwa's nuke attack covers the entire stage and can't be blocked by anything. The only way to avoid it is by climbing up to any of the platforms before the ball hits the ground.

Narwa the Allmother's infamous dragonators can't be blocked by any means. The safest way to defend against this attack is by using the provided EZ Farcaster to escape. More experienced hunters can instead Wiredash to the center once the thunder ball disappears to get some more hits in.

Much like Narwa's nuke, the Allmother's version also can't be guarded. Thankfully, raised platforms with ballistae appear during this attack to help avoid it entirely.

Crimson Glow Valstrax's signature move can't be blocked even with Guard Up. Hunters usually avoid this attack by diving as an emergency evade.

The spikes Apex Rathian leaves on the ground can't be guarded against. Guarding into them even with Guard Up will still inflict your hunter with venom.

Gaismagorm only unleashes this attack when you fail to break all the Qurio cores as it's climbing. As the resulting explosion is massive, it makes sense that not even a shield can block it. Its other Qurio blasts can be blocked normally but require Tremor Resistance Lv. 3 to keep your footing.

Flaming Espinas stands out with its charged breath attack that can easily take out unprepared hunters. Using an emergency evade or staying as far as possible will guarantee this attack won't hit.

The poisonous mist resulting from Risen Chameleos' Toxic Explosion cannot be guarded against at all. However, you can still guard against the actual tail slam.

In order for us to make the best articles possible, share your corrections, opinions, and thoughts about 「 List of Unblockable Attacks | Monster Hunter Rise: Sunbreak」 with us!