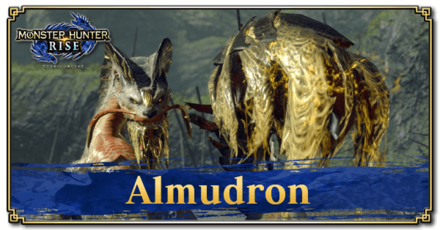 This is a hunting guide for Almudron, a Large Monster in Monster Hunter Rise (MH Rise), and the Sunbreak DLC. Read on to learn Almudron's weaknesses, forgeable weapons and armor, drops, and attack patterns for Master Rank!

How to Unlock Almudron 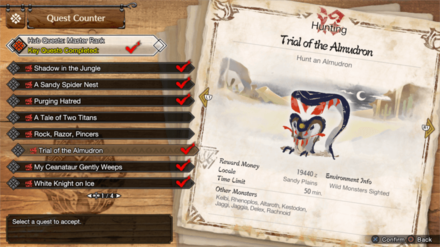 MR Almudron is unlocked by completing the Urgent Quest A Rocky Rampage and reaching MR 3 in the Sunbreak expansion. 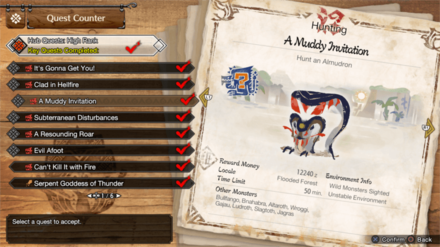 High Rank Almudron is unlocked by completing the Urgent Quest Can't Kill It with Fire and reaching HR 7. 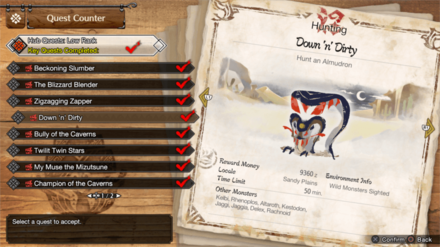 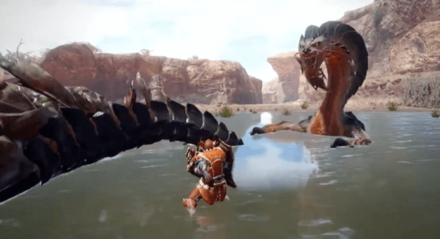 The mud-covered tail is what makes this species strong; attacking this outer layer will chip away at it, so removing this muddy shroud should be your priority. The gold-glimmering mud is harmful to the touch, so mind the color of your surroundings while hunting these beasts.

How to Beat Almudron

Use Mud Platforms to Your Advantage

You can sometimes use Almudron's mud against it! While normally acting as potentially dangerous traps, Almudron's mud can occasionally create structures you can climb on.

Use these structures to perform aerial attacks or to dodge the waves of muck Almudron sends out with some of its attacks.

Almudron usually goes into its Half-Submerged Stance after the following attacks:

In this stance, most of Almudron's body is submerged beneath the waters, leaving only its tail, forelegs, and head exposed. Surprisingly, the safest area during this stance is the gap between its tail and forelegs, as doing so only leaves you vulnerable to very few of its attacks.

Alternatively, you can also position yourself behind its head when it takes this stance to deal damage to its back if you need to break it.

When Almudron forms a mud ball on its tail, it improves the damage of each of its Tail Attacks and allows it to use its Mud Ball Hammer. Breaking the mud ball not only makes the fight against Almudron easier but doing so can also knock it down!

Positioning around Almudron's hind legs is a great way to safely deal damage since most of its attacks originate from its head or tail.

Many of Almudron's attacks can inflict Waterblight on impact, which slows down stamina recovery. Negate this potentially deadly status ailment by bringing Nulberries to the hunt.

Use Meat Bait to Attract Giganha

Be on the lookout for Giganha-infested waters, as these particular fish can help you in the fight against Almudron! Place Meat Bait directly under Almudron whenever it's knocked down or when you're sure it won't move away.

After placing the bait, Giganha will shortly attack the immediate area, dealing damage and staggering Almudron in place for a few seconds. You can use this window of opportunity to dish out your heaviest against it!

Be sure to always check your base camp's Supply Box for Meat Bait before starting the fight!

In addition to its attacks in Low and High Rank quests, Almudron uses the following attacks in Master Rank.

Almudron uses its insanely long body to quickly lunge at unsuspecting hunters who think they're safe from a distance.

Almudron can use mud in a variety of ways to deal damage and inflict Waterblight on hunters.

Almudron can use its massive tail to hit hunters from a distance or knock them away when they get too close. These tail attacks have huge, sweeping wind-up motions, so it is easy to tell when an attack is coming. Guard up or evade accordingly! See all of the tail attack variations below:

In order for us to make the best articles possible, share your corrections, opinions, and thoughts about 「Sunbreak Almudron: Weakness and Drops | Monster Hunter Rise」 with us!