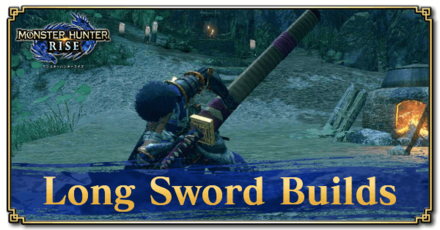 This is a guide to the best builds and equipment for Long Sword in Monster Hunter Rise (MH Rise) for the Nintendo Switch. Learn about the best Long Swords, and the best Skills and Armor pieces to use with the Long Sword for Low Rank, High Rank, and endgame.


This is a developing guide for Best Long Sword Builds & Equipment. If you have any suggestions or additional information, please comment them below!

Deepest Night easily takes the top spot as the best Long Sword in Monster Hunter Rise. Its 180 attack rating is paired with white sharpness, granting the wearer incredibly good base damage to work with.

Its most notable feature, however, is its insanely high affinity rating (40%). This allows players to reach great affinity ratings when paired with the right skills and armor pieces.

Attack Boost is added for further improvements to base damage. Other QoL skills are added like Quick Sheath, Speed Sharpening, and Stun Resistance for general performance improvement.

Quick Sheath in particular, is extremely important thanks to the improvements of the Long Sword's Sheath Attacks.

Deepest Night All The Way

Deepest Night is considered to be the best Long Sword in Monster Hunter Rise right now. Its stats are so good that you can easily reach the end of 7★ Hub Quests with relative ease with it!

The Full Barioth Set is arguably tailor-made for the Long Sword!

Every skill compliments this weapon amazingly well, providing a good balance of improvements towards damage and general performance.

Stick with the Ore Tree

If you stay with a Low Rank Weapon when progressing into High Rank, you'll be faced with Monsters with higher and higher HP, and hunts will take longer and longer to complete. To get you started, work towards crafting the Keen Edge II and Julienne Blade. As these Weapons can be crafted almost entirely with Ore Materials, they're easier to craft than those which require farming Monsters.

A straightforward starter build that focuses on improving the Long Sword's performance as a whole. Damage is bolstered through Critical Eye, Attack Boost, and Peak Performance while improving Sheath Attack performance via Quick Sheath.

Craft or Upgrade Armor when needed

You don't need to power up your Armor if you're not struggling, but as the Monsters in High Rank deal high damage accordingly, you'll want to start crafting once you start hitting a wall. Upgrading Low Rank Armor with Armor Sphere works in a pinch, but as LR Armor is basically obsolete at this point, you're better off taking the time to make some real High Rank Armor.

Talismans and Decorations Can Wait

You'll be able to make it through the ★5 Hub Quests without worrying about crafting Talismans and Decorations yet. It's tempting to try to craft a Talisman with the Long Sword go-to Quick Sheathe, it's possible to gain this Skill with Armor, so don't spend Monster Materials you would otherwise use on Talismans just yet.

As for Decorations, there's not anything that particularly stands out for Long Sword at this stage, and all Decorations will require crafting new Armor anyway, so it's best to wait until after you have upgraded your Armor to start going after Decorations.

Sinister Long Sword I is an All-Purpose Juggernaut! 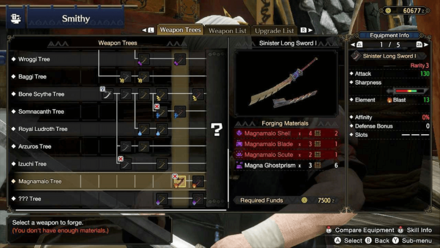 Sinister Long Sword I boasts solid stats across the board. Coupled with its inate Blast Element, this particular Long Sword is an all-purpose juggernaut that excels in most hunts at this stage of the game! 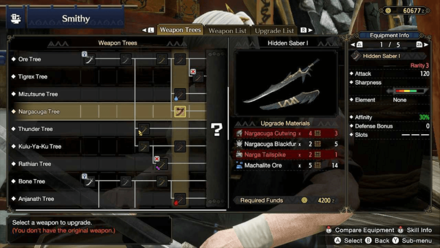 Those who love their critical strikes may consider going for Nargacuga's Hidden Saber I. This particular Long Sword offers high attack, amazing sharpness, and a whopping 30% affinity boost!

This armor combination pushes Critical Eye to its maximum level (7), while further boosting your overall affinity by 20% with Lv. 2 Latent Power whenever it is active. Pair this set with Hidden Saber I to reach a total of 90% Affinity when Latent Power is active!

This particular armor combination revolves around the Long Sword's special sheathe attacks. Critical Draw's 40% affinity boost at lv3 applies to these particular attacks, making it the a great source of extra affinity.

Iron Gospel is a Cheap and Stable All-Rounder 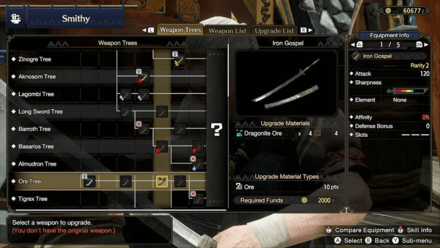 The Ore Tree's Iron Gospel boasts solid stats across the board. Paired with its relatively cheap material cost, this particular Long Sword is considered to be a efficient all-purpose weapon in the early stages of the game. 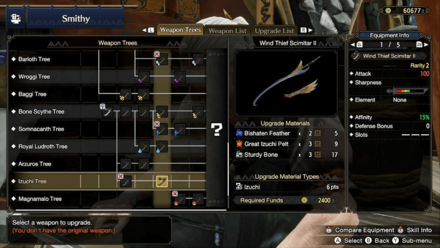 Great Izuchi's Wind Thief Scimitar II's base attack may fall short compared to Iron Gospel's, but its 10% affinity rating makes it a worthy alternative if you prefer to max out on affinity early on! 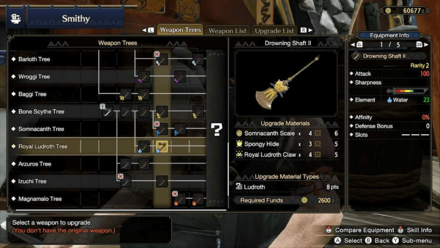 Royal Ludroth's Drowning Shaft II offers great stats across the board with the added benefit of having Water Element, making it an great choice against Magnamalo in particular.

This armor combination focuses on maximizing the Long Sword's damage by pumping more affinity into it. These pieces can be obtained early on in the game, making it a great starter set.

Long Sword users who prefer to play a sheath-heavy playstyle may use this particular armor combination once they reach 4★ village quests. Most of Barrioth's pieces contain the Quick Sheath skill, making it the perfect compliment to Iai slashes and special sheathe attacks.

>>2 You’re probably right, but in the long run deepest night is LS to aim for.

Register as a member and get all the information you want. (It's free!)
Login
Opinions about an article or post go here.
Opinions about an article or post
We at Game8 thank you for your support.
In order for us to make the best articles possible, share your corrections, opinions, and thoughts about "Long Sword Builds and Best Equipment | Monster Hunter Rise" with us!
When reporting a problem, please be as specific as possible in providing details such as what conditions the problem occurred under and what kind of effects it had.