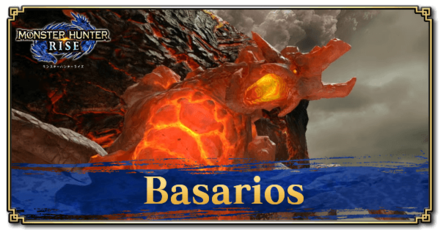 This is a hunting guide for Basarios, a Large Monster in Monster Hunter Rise (MH Rise) and the Sunbreak DLC. Read on to learn Basarios' weaknesses, forgeable weapons and armor, drops, and attack patterns for Master Rank! 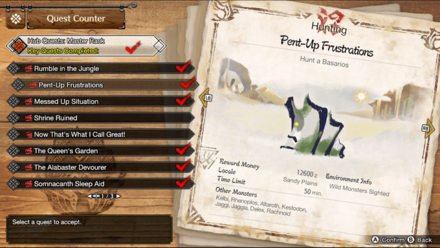 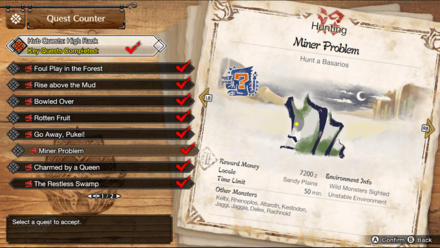 High Rank Basarios is unlocked after finishing the Urgent Quest The Restless Swamp and reaching HR 5. 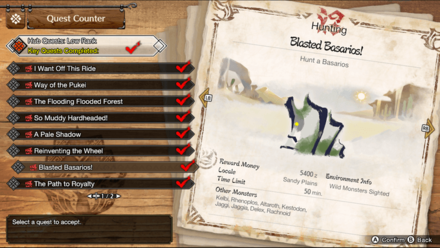 Its thick, hardened shell is impervious to most attacks, making it tricky to approach, but if you can break its abdominal plating, you should be able to rip off its shell and deal some heavy hits. Attacks that produce heat will soften up the hide and make the job easier.

Unless you're using a Gunlance, we recommend that you use weapons that have Green Sharpness or higher against Basarios—anything lesser will be ineffective.

Basarios' wings are incredibly hard and can deflect the attacks of most weapon types regardless of sharpness.

It is recommended that you focus attacks towards the legs, abdomen, lower tail, and head (when it's molten) instead.

Keep an Eye Out for Molten Parts

Basarios heats up specific body parts to perform various attacks. You can use this to identify which attack Basarios can use through the fight:

Another thing to note is that molten parts are softened, meaning you can dish out maximum damage towards these parts without the fear of bouncing!

Take Advantage of Its Slow Speed

Similar to most heavily armored monsters, Basarios suffers from having slow attack animations. Take advantage of this by landing heavy attacks of your own as they play out!

As previously mentioned, Basarios' Gas Clouds can either inflict Poison or Sleep status ailments. Always bring Antidotes or Herbal Medicines to nullify Poison. Energy Drinks, on the other hand, can negate the Sleep ailment!

Alternatively, you can also check your base camp's Supply Box once you start the hunt for any free Antidotes or Energy Drinks.

Basarios' burrow attack can be lured into Large Barrel Bombs. Not only will this damage the Basarios, it will also unburrow it and stun it for a few seconds!

In addition to its attacks in Low and High Rank quests, Pukei-Pukei uses the following attacks in Master Rank.

Basarios can unleash flames from its breath whenever its head is molten. This particular attack has two variations.

Basarios ejects a dangerous gas from its underbelly, damaging anyone caught in the attack and applying specific status effects depending on the gas itself.

Basarios can use its tail to slap hunters who stay behind it for too long. This attack has two possible patterns.

In order for us to make the best articles possible, share your corrections, opinions, and thoughts about 「Sunbreak Basarios: Weakness and Drops | Monster Hunter Rise」 with us!