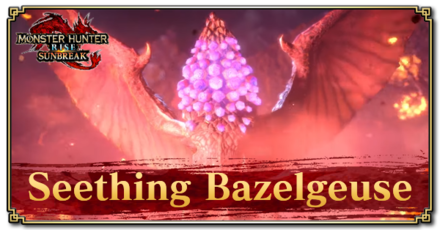 How to Unlock Seething Bazelgeuse 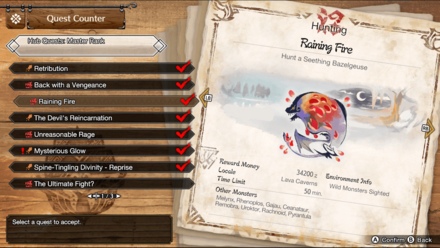 To hunt Seething Bazelgeuse after downloading Sunbreak's Title Update 1, you need to raise your MR to 10. 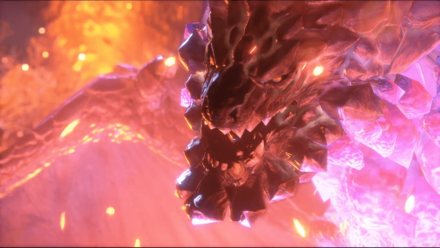 Keep an eye on their head and tail scales when they start glowing a phosphorescent white. These scales have a wide blast radius and are extremely dangerous. If left in this state for too long, Bazelgeuse will unleash a devastating blast attack that covers the entire area. To avoid this punishing attack, be aggressive and focus on the head and tail!

How to Beat Seething Bazelgeuse

Stay Away From Scales

Seething Bazelgeuse's scales, which it can easily spread all around the field, can ignite and explode after a few seconds. Run away from the scales when it glows white or bright purple as it will explode soon!

Aside from its bomb attacks, most of Seething Bazelgeuse's physical moves require it to approach hunters. If you are getting chased by Bazelgeuse and it's about to use its chin or tail attacks or its divebomb moves, Wiredash away from it or your emergency evade dive as a last resort.

Bazelgeuse will be powered-up once its scales glow bright. meaning that it has entered its Seething state. During this state its attacks are more powerful, its scales will cause bigger explosions, and it has access to more deadly attacks.

Try your best to take it out of its Seething state as soon as you can by attacking its glowing chin and tail. Doing so will also knock it out, giving you more chances to attack while it is vulnerable.

When using melee weapons against Seething Bazelgeuse you are always at the risk of being near its exploding scales that are scattered near its body.

Consider using a Bow, Light Bowgun, or Heavy Bowgun when fighting against Seething Bazelgeuse to create some distance away from it.

Seething Bazelgeuse uses its scales like bombs which can explode after a short period of time. It may follow up with other moves after scattering its scales, so watch closely.

Take note that the bombs will cause bigger explosions if Seething Bazelgeuse's scales are glowing.

Seething Bazelgeuse's chin is filled with explosive scales. It then uses this body part pummel and grind any hunters near it.

Seething Bazelgeuse can use its tail filled to the brim with explosive scales to cause explosions as it drags it across the field.

In order for us to make the best articles possible, share your corrections, opinions, and thoughts about 「Sunbreak Seething Bazelgeuse: Weakness and Drops | Monster Hunter Rise: Sunbreak」 with us!