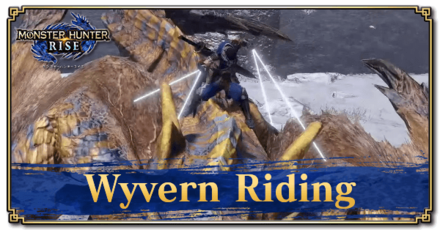 This is a guide on Wyvern Riding, a new mechanic introduced in Monster Hunter Rise (MH Rise). If you want a tutorial guide on how to ride monsters as well as the controls, read on!

What is Wyvern Riding?

Wyvern Riding is a newly introduced mechanic in Monster Hunter Rise (MHR). This allows you to ride and control any large monster!

The mounting from past games has been completely replaced with Wyvern Riding. Not only will you ride monsters this time, but you also have to control them as well. This introduces new things to master and techniques to learn!

Has A Time Limit 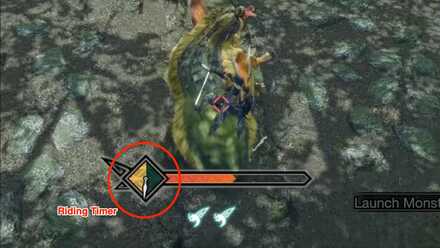 The Riding Timer shows you how long you can ride a certain monster. Time replenishes whenever you land an attack and depletes when you are hit. You can't ride monsters forever!

How to Make Monsters Rideable 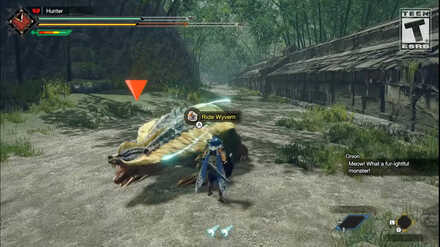 To ride monsters, you have to put them in a mountable state first. This can be accomplished in several ways: using Silkbind and Wirebug Attacks consistently, using Puppet Spiders, or monsters attacking each other!

Take note, Wyvern Riding replaces the traditional mounting we know from the past games so consider these methods if you want to ride these monsters!

Use Silkbind, Wirebug, and Aerial Attacks 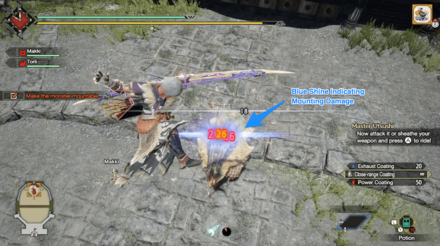 Using Silkbind Attacks, Wirebug Attacks, and Aerial Attacks consistently against a monster accumulates mounting damage onto a monster. When your wirebugs are fully charged, always try to execute silkbind attacks!

Also, a blue shine will appear behind the damage numbers whenever you deal mounting damage so look out for those! 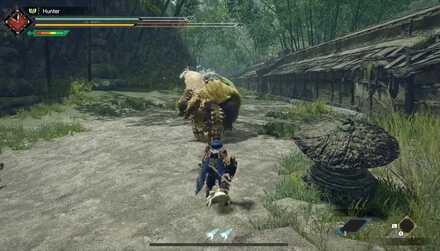 Puppet Spiders are a type of Endemic Life that puts monsters in a mountable state instantly! Like the usual Endemic Life, they can be picked up around the map and will be stored like an item.

To use the Puppet Spiders, highlight it on the Item Bar and use by pressing

for the Nintendo Switch,

for the PC version.

Make Monsters Fight Each Other 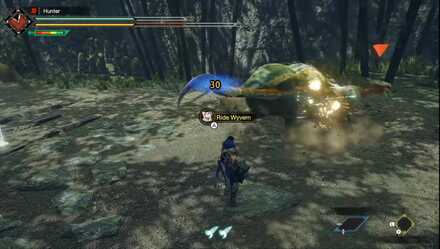 A turf war can be instigated by luring monsters to the same area. This can be done using certain endemic life like the Stinkmink or the Wailnard. The loser will always be mountable after the turf war so be alert for when you can ride!

If you have just mounted a specific monster, you cannot mount it again after a short while. Based on our testing, a cooldown of 5 minutes is required before you can mount the same monster again.

The Arzuros in the Wyvern Riding Tutorial is Different

The Arzuros in Wyvern Riding tutorial is a bit different because it only requires 1 wirebug or silkbind attack hit before you can mount it. This is intentional so you would not waste time trying to mount the monster. The wyvern riding threshold in the full game is increased to balance the game. Do not be confused if you are not mounting a monster after a single hit!

When you have successfully mounted the monster, know how to ride it! Here are all the things you need to know! 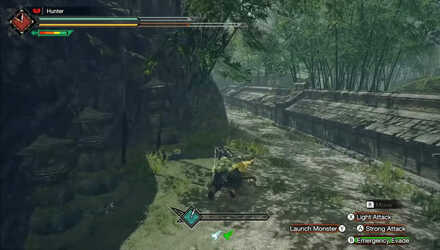 While riding a monster, use the Left Analog Stick while holding the R Button for Switch.

Use the Left Analog Stick while holding the R1 Button for Playstation.

Move the monster around with the Left Stick while holding the Right Bumper for Xbox.

Use any of the following buttons W A S D while holding the Shift Button for PC. You can take the monster anywhere on the map so ride to your heart's content! 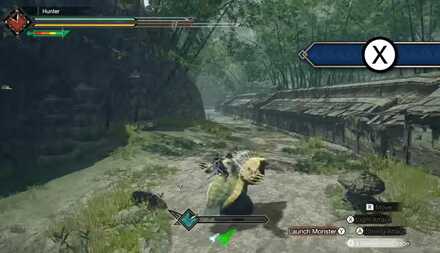 Execute a light attack by pressing the X Button for the Switch, the Triangle Button for Playstation, the Y Button for Xbox, and Left-click for PC. 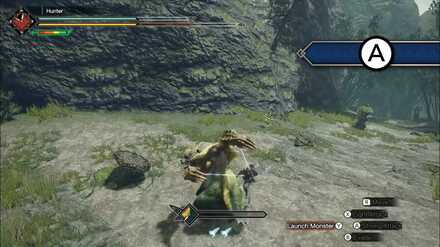 Execute a strong attack by pressing the A Button for the Switch, the Circle Button for Playstation, the B Button for Xbox, and Right-click for PC.

A strong attack is slower than a light attack but packs more punch. It is advisable to use this only when there is a huge attack window! 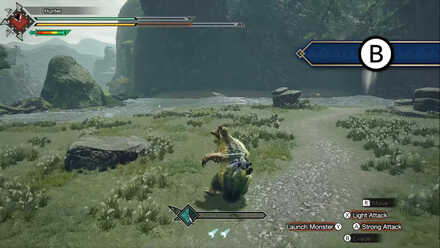 You can evade by pressing the B Button for the Switch, the X Button for Playstation, the A Button for Xbox, and the Space Bar for PC.

You can execute an Emergency Evade when your monster is attacking or being hit at the cost of your Wirebug gauge. 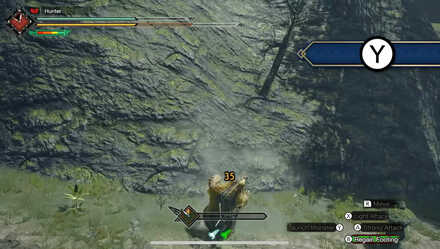 You can launch monsters onto a wall, an obstacle, or another monster by pressing the Y Button (Switch), Square Button (Playstation), X Button (Xbox), or C Button (PC). This costs one Wirebug per hit and this can be chained multiple times! This will cause you to dismount so keep this in mind!

To chain wall slams, press B Button (Switch), X Button (Playstation), A Button (Xbox), or the Space Bar (PC) to recover your grip onto the monster. Be careful though, the subsequent launches will be timed so try launching a monster in an area with opposing walls!

Also, launching the monster you are currently riding onto another monster will cause that monster to enter its mountable state! 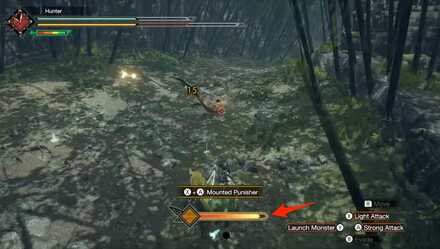 To fill up the Wyvern Riding Gauge, attack other monsters or evade before you get hit.

All monsters can be ridden but not all of them are very helpful with the monsters. Yes, additional damage is always helpful but other effects like status or blights should be accounted as well. Here are some that we suggest riding when they are in the locale!

Learn the Ropes by Doing the Learning to Ride Quest 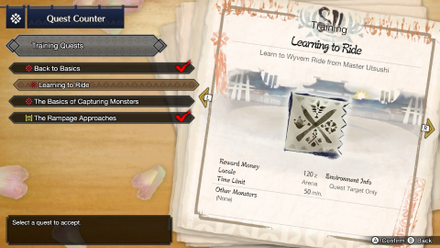 The Learning to Ride quest is a Training Quest, one of few that you can take which helps with learning the fundamentals of gameplay. In this quest, you will learn all that you need to know to Wyvern Ride, including the usage of Puppet Spiders.

Use Large Barrel Bombs While Airborne

If you have bombs in your inventory and there is a mountable monster in front of you, you might want to maximize the damage you deal before mounting by throwing a bomb while airborne. This makes sure that the single-hit attack damage is maximized! If you have time, you may even lay down bombs before going airborne to add more boom to your attack!

Throw bombs by equipping them in your Item Selector, going airborne using Wirebugs, and pressing your Use Item button to throw the bomb downward.

After putting a monster in a mountable state, the monster will not move for about 10 seconds. Maximize this time by recovering your health, sharpening your weapons, or crafting items before you deal that single-hit to commence Wyvern Riding!

Always Attack a Monster To Ride

Since being in a mountable state gives you free hits, we suggest always attacking the monster once to ride them. The additional chip damage will still contribute to your dps!

Learn How to Dodge Cancel

After using a weak or strong attack, if you still have wirebugs in your gauge, you can dodge after an attack to cancel the remaining attack animation and follow-up with another attack! This can greatly increase your overall Wyvern Riding DPS and speed up the charging time of your Wyvern Riding gauge so you can execute the Mounted Punisher faster!

Use Emergency Evade to Get Up!

While Wyvern Riding, there is a possibility for your monster to go down because of another monster's attack. When this happens, use emergency evade to stand up again!

Hunter Health Is Not Affected

The health of hunters does not go down when the monster you are riding gets hit! Do not worry too much about your health when you are on top of a monster just focus on attacking!

Use Evade to Counter Another Monster's Attack

You can also use Evade to counter another monster's attack. This will stagger them and deal damage!

Launch a Monster Into Another Monster

When there is another monster in the area, we suggest launching the monster you are riding onto the other monster. This puts the attacked monster into a mountable state so you can Wyvern Ride again!

Of course, be aware if the other monster has been mounted already! You cannot mount the same monster again - you have to wait for about 5 minutes!

Launch the Ridden Monster to Walls or Obstacles 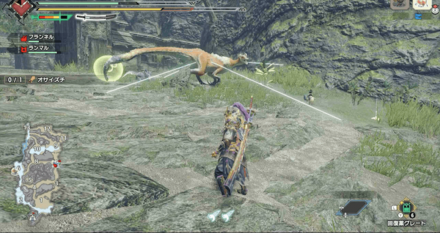 Press the following buttons when in front of a wall/obstacle to slam the monster. Take note that you can do this multiple times as long as you have wirebug charges by pressing your evade button after every successful wall slam.

Not only does this deal big damage, but it also restrains the monster using ironsilk threads that greatly reduce its movements!

Better to Do This Immediately in Multiplayer

Only Use Mounted Punisher When the Riding Gauge is Almost Out! 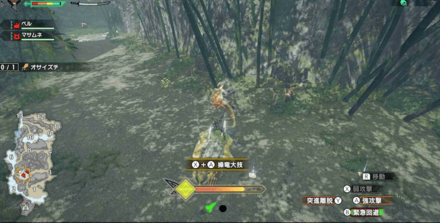 Some attacks from mounted monsters, like Rathian's Poison Strong Attack or Great Baggi's Sleep Mounted Punisher, deal blights or status effects. Use this effectively against other monsters!

In order for us to make the best articles possible, share your corrections, opinions, and thoughts about 「Sunbreak Wyvern Riding | How to Mount and Ride Monsters | Monster Hunter Rise」 with us!