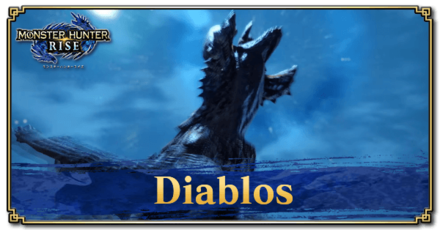 This is a hunting guide for Diablos, a Large Monster in Monster Hunter Rise (MH Rise) and the Sunbreak DLC. Read on to learn Diablos's weaknesses, forgeable weapons and armor, drops, and attack patterns for Master Rank!

How to Unlock Diablos 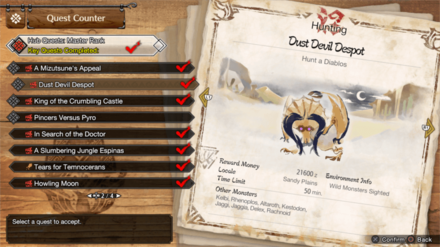 MR Diablos is unlocked by completing the Urgent Quest Ice Wolf, Red Moon and reaching M★4 in the Sunbreak expansion. 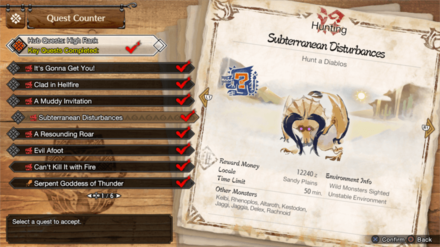 High Rank Diablos is unlocked by completing the Urgent Quest Can't Kill It with Fire and reaching HR 7. 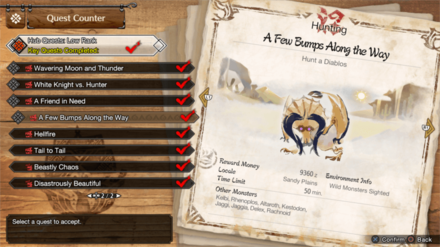 Diablos can be forcibly brought to the surface by using loud sounds. And its charging attack, while devastatingly powerful, can be baited into colliding with anthills, momentarily getting the Diablos stuck.

How to Beat Diablos

While staying near Diablos' head is risky, breaking its horns makes the fight easier as it reduces the range of its Charge Attacks. However, it is important to note that Diablos' horns are tough enough to deflect most weapons below blue sharpness.

When aiming to break Diablos' horns, consider using Hammers and Gunlances, as their charged swings and shelling damage can bypass the horns' durable nature. Alternatively, consider using Mind's Eye against Diablos so you can strike its horns without fear of bouncing attacks off of them.

Some melee weapons may have a difficult time hitting Diablos' head due to the monster's tall height. Staying close to Diablos' rear and focusing attacks on its legs and chest is a safer strategy that can still result in knockdowns, allowing you to target the head afterwards. 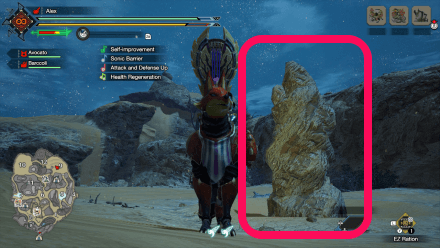 Hunters can use walls and pillars in the environment to their advantage by baiting Diablos into charging at them, causing the monster to get stuck. Using environmental traps such as these can create large openings that hunters can use to deal massive damage to Diablos.

Use Quicksand in the Sandy Plains

When destroyed, the pillars in the Sandy Plains uncover quicksand pits. These quicksand pits act like Pitfall Traps, making them great environmental traps to take advantage of when Diablos performs its charging attacks.

Hunters can use Sonic Bombs to force Diablos out of the ground. In particular, if Diablos is burrowing towards a target, throwing a Sonic Bomb towards the crumbling earth will cause it to end its attack prematurely. Doing this leaves it vulnerable for a few seconds, giving hunters a window of opportunity to easily deal damage to the monster.

In addition to its attacks in Low and High Rank quests, Diablos uses the following attacks in Master Rank.

Diablos can use its massive tail to inflict high damage towards unsuspecting hunters.

One of Diablos' signature sets of moves is its Charging Attacks. Diablos lowers its horns before locking on a target and running towards them at full speed, dealing massive damage on contact.

Each variation of Diablos' Charging Attacks can easily knock out careless hunters.

Another one of Diablos' signature sets of moves is its Burrowing Attacks. In these attacks, Diablos burrows underground and prepares to ambush its target from the air or from underneath them.

In order for us to make the best articles possible, share your corrections, opinions, and thoughts about 「Sunbreak Diablos: Weakness and Drops | Monster Hunter Rise」 with us!