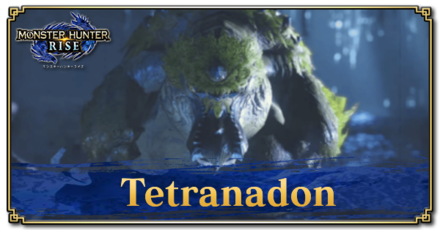 This is a hunting guide for Tetranadon, a Large Monster in Monster Hunter Rise (MH Rise) and the Sunbreak DLC. Read on to learn Tetranadon's weaknesses, forgeable weapons and armor, drops, and attack patterns for Master Rank! 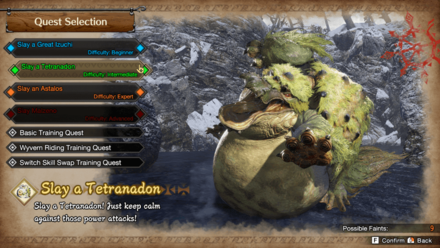 You can see Tetranadon's master rank-specific moves in the Sunbreak demo. Tetranadon is featured as an Intermediate quest.

How to Unlock Tetranadon 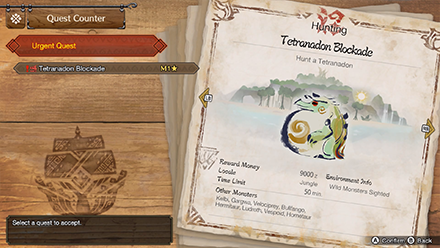 MR Tetranadon is the target of the MR 1 Urgent Quest Tetranadon Blockade in the Sunbreak expansion. 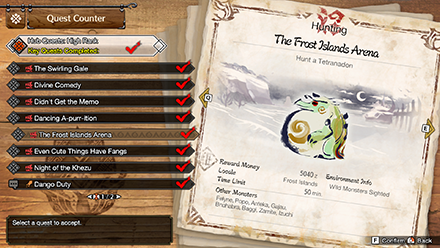 High Rank Tetranadon is unlocked by completing the Urgent Quest The Blue Apex and reaching HR 7. 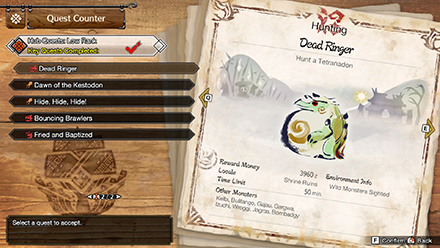 Low Rank Tetranadon is the target of the ★1 Urgent Hub Quest Dead Ringer. Completing this quest unlocks HR 2. Tetranadon is also available in the ★3 Village Quest, Can't Stomach the Thought.

After a large meal, its movements become sluggish, but don't be fooled; its swings become more weighty and destructive as well! Watch for when it moves slowly, strike true, and it'll belch up its dinner and return to normal.

How to Beat Tetranadon

Be Wary of Tetranadon's Front 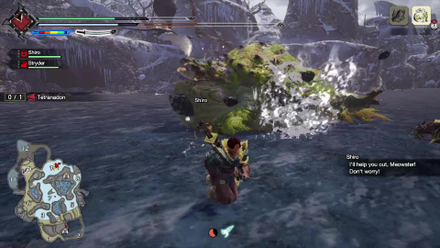 Most of Tetranadon's attacks are performed in front of it. Be ready to dodge sideways to avoid damage.

Tetranadon's belly expands when it eats. During this phase, it becomes slower and more susceptible to attack combinations, but also gets more aggressive.

Take advantage of this temporary weakness. Deal as much damage as possible towards the belly. Tetranadon's belly will contract and eject its contents after receiving enough damage, knocking it down.

Rush Attack Can Be Dodged Sideways

Tetranadon's Rush Attack is a straightforward move. Move sideways to avoid this attack. This attack will be harder to dodge if Tetranadon's size is expanded. Beware, as Tetranadon can do a double rush!

The Tetranadon will attempt to stun the hunter by clapping its massive paws, attempting to trap them between its hands. If hit by this, the hunter will be left stunned. Avoid this move by evading backward or using a Wirebug. 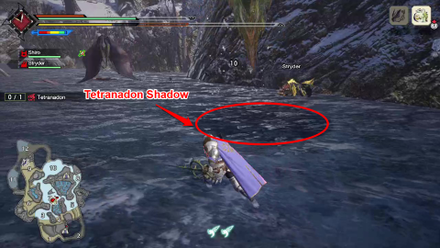 The shadow of Tetranadon acts as a tell when it attempts a Tetrana-splash or any lunging move. Watch for its shadow as it is about to land. This will give you an idea of where you can dodge.

Use the Wirefall After Being Restrained

Tetranadon has two pin attacks to restrain the hunter. You can Wirebug away once it lets go of you, either after it throws you on the ground or spits you into the air. This will let you evade the follow-up attack.

Learn how to use the Wirebugs more by reading our article linked below:

Tetranadon's water ball attacks inflict Waterblight on impact. Always have a few Nulberries with you during the hunt to negate this potentially deadly effect!

In order for us to make the best articles possible, share your corrections, opinions, and thoughts about 「Sunbreak Tetranadon: Weakness and Drops | Monster Hunter Rise」 with us!