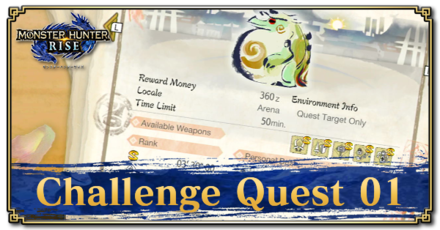 This is a comprehensive guide on Challenge Quest 01 found in Monster Hunter Rise (MH Rise). Read on for a guide on how to beat Tetranadon in the Arena, how to get S Rank, armor and weapon loadouts, and more! 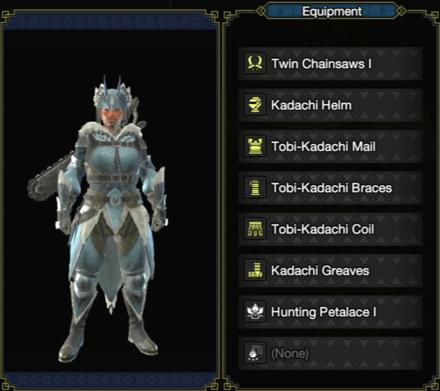 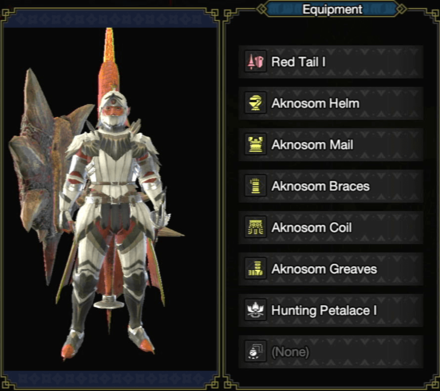 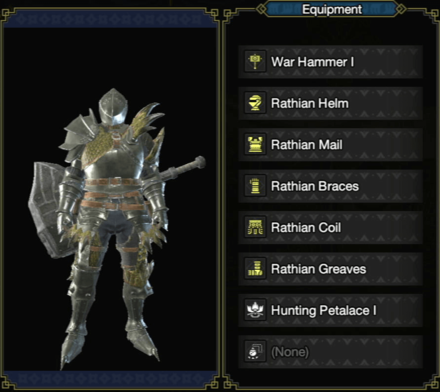 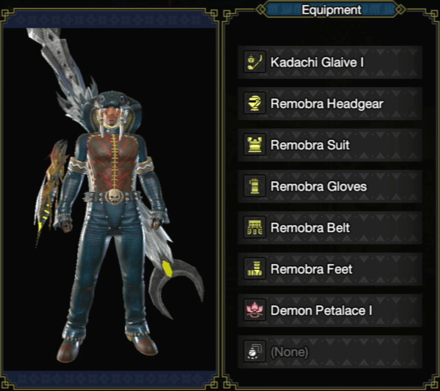 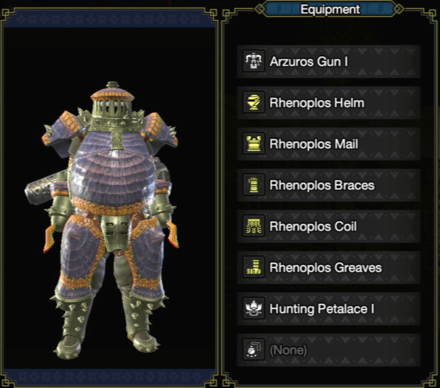 Binding Pierce is vital for S Rank clears with Dual Blades. Make sure you land the kunai on the head for maximum damage!

Tetranadon's head has the best hit zone value for our Dual Blades and must always be prioritized for quick and easy S Rank clears. The arms and the bloated belly can also be targetted for solid damage if the head is unreachable.

Fill and Maintain Your Demon Gauge

Dual Blades, regardless of the hunt, must always have their Demon Gauge filled to improve non-demon mode attacks and increase overall damage.

Start the Fight With Sleep Kunai and Large Barrel Bombs

Utilize your Sleep Kunai and Large Barrel Bombs to deal solid damage at the start of the fight. You can even use the bombs to your advantage by striking it with the lance and immediately activating Anchor Rage just before it explodes.

Refer to the table below a breakdown of our recommended start to this fight:

Focus on the Head

As with any other weapon in this Challenge Quest, Tetranadon's head is a priority target and must always be aimed at for maximum damage. Forearms and a bloated Belly are good alternatives in cases where the head is unreachable.

Anchor Rage grants you a damage buffs throughout the fight and must be used as much as possible to achieve S Rank clears. This particular switch skill lets you block all of Tetranadon's moves with ease except its double palm lunge.

Strength Charge must be used to achieve S Rank clears with a Hammer. This particular mode allows us to dish out high damage efficiently.

Do what the Hammer does best and strike at Tetranadon's head whenever possible. Not only does this ensure maximum damage, but accumulating enough damage results in knockouts as well!

Use Your Silkbind Attacks

Impact Crater and Silkbind Spinning Bludgeon are key skills against Tetranadon and must be used with proper timing and positioning for maximized effect.

Impact Craters' descending attacks must land on the head as much as possible. The attack animation is fairly long so we recommend that you perform this move whenever Tetranadon is knocked out or when you're absolutely sure that the descending attacks will connect.

Silkbind Spinning Bludgeon is great for closing the distance between you and Tetranadon whenever he charges or hops away. This move is especially effective at striking the head whenever Tetranadon is bloated as well. Make sure you charge to at least level two first for solid damage.

Start the Fight With Your Pitfall Trap

Position in a few steps along Tetranadon's path and set your Pitfall Trap to start the fight. This allows you to land free strikes to the head and gather kinsect extracts with ease.

Maintain Your Triple Up Buff

Insect Glaives, regardless of the hunt, must always maintain their Triple Up Buff. This grants you better attack combinations and immunity to roars.

Challenge Quest 01's Insect Glaive Loadout comes with Rigiprayne, a powder-type Kinsect that produces Paralysis Clouds. This synergizes perfectly with our Tetraseal Slash and allows us to Paralyze Tetranadon throughout the fight. Make sure you combust the clouds near Tetranadon for Paralysis buildup!

Aim for the Head and Forelegs

As with any weapon in this Challenge Quest, the head lets us deal the most damage against Tetranadon as must always be prioritized throughout the fight — with forelegs being the best alternative.

Tetraseal Slash is a heavy-hitting combination that allows us to mark monster parts for powder-type kinsects as well. This combination is the key to achievent S Rank clears against Tetranadon.

Always aim for Tetranadon's head for maximum damage. This is extremely important for Heavy Bowgun S Rank clear as hitting other parts too much will lead to failure.

Start the Fight With Sleep and Wyvern Ammo

Position close to Tetranadon at the start of the fight and put it to sleep with Sleep Ammo. The timing of Wyvern Ammo shots afterward is very important to achieve an optimal start.

Use Counter Shots on the Head

Counter Shots are extremely important for S Rank clears against Tetranadon. Make sure you use these shots as much as possible and on the head for maximum damage.

Use Poison and Flaming Ammo

Use Poison and Flaming Ammo to finish Tetranadon off after your explosive opening.

Tetranadon gets poisoned after four Poison Ammo shots. Flaming Ammo must always be fully charged and aimed at the head for maximum damage.

In order for us to make the best articles possible, share your corrections, opinions, and thoughts about 「Challenge Quest 01 - Tetranadon: How to Get S Rank | Monster Hunter Rise | MHR (MH Rise)」 with us!