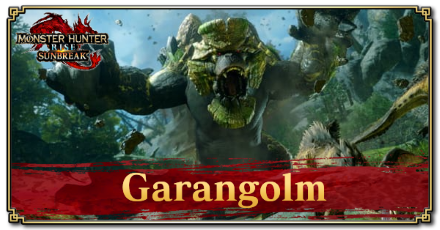 This is a hunting guide for Garangolm, a Large Monster in Monster Hunter Rise (MH Rise) and the Sunbreak DLC. Read on to learn Garangolm's weaknesses, forgeable weapons, forgeable armor, drops, and attack patterns for Master Rank! 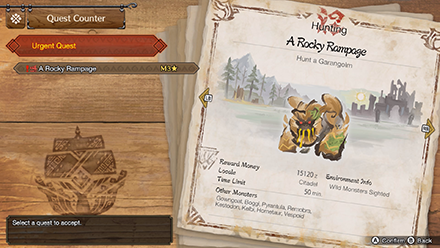 Garangolm is the target of the Urgent Quest that unlocks MR 3. You can get the quest by finishing two M★2 Key Quests after completing Provoking an Anjanath's Wrath. 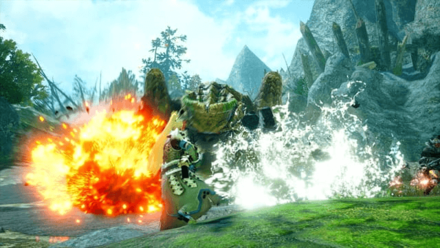 Garangolm will reinforce their arms by covering them in elements. When their arms are in this state, continuously attacking the elemental covering will eventually break it off, toppling the beast. Focus your assault on their arms as soon as they're covered!

Garangolm has a plethora of ranged attacks that can easily reach far away Hunters. We suggest keeping near Garangolm to avoid those moves. Gotta be careful though cause Garangolm is so huge, it sometimes block the camera!

Aim for The Arms When It Has Elemental Rocks!

As the battle rages on and Garangolm enrages, it will punch the ground with extreme force to cover its fist with rocks. These rocks give Garangolm blast attacks and water attacks - one for each fist.

During this time, try attacking the fist until it breaks down - like how we do it for Goss Harag's blades. This will topple down Garangolm and gives you a big attack window.

Garangolm is probably one of the unique monster that gets stronger as you wear them down. At the later stages of the battle, when you have most likely broken Garangolm's head or arms, it will not only imbue rocks on its fists but on its head as well.

This gives Garangolm access to death combos that can easily cart any unsuspecting Hunter. Always keep a wirebug ready so you can Wirefall out of these combos when necessary.

Garangolm mostly deal Blast and Waterblight, both can be mitigated quite easily. Just roll thrice to get rid of Blast and eat a Nulberry to cure Waterblight.

Garangolm will gain access to death combos as soon as it has the ability to cover its broken head with rocks. Be careful to not get hit of them as they can send you back to camp! 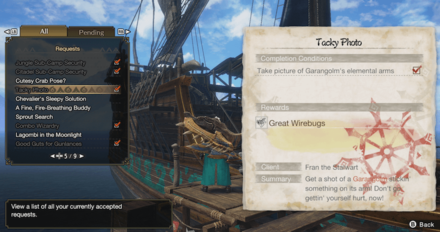 A request to take a picture of Garangolm's elemental arms will be given to the Hunter by Fran the Stalwart. The request is called Tacky Photo.

To finish the request, you have to take a picture of the arms right after it has been imbued by lava or moss rocks. If Garangolm is in the strong arm state for a while, the request would not finish.

In order for us to make the best articles possible, share your corrections, opinions, and thoughts about 「Sunbreak Garangolm: Weakness and Drops | Monster Hunter Rise」 with us!