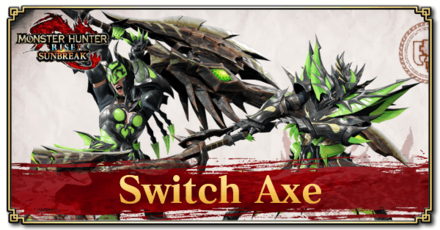 This is a guide to the Switch Axe, a weapon in Monster Hunter Rise: Sunbreak (MH Rise). Read on to learn about new Switch Axe controls and combos, how to use Switch Axe discharge, Switch Axe Phials as well as details on Switch Axe Switch Skills.

Though pretty short, Switch Axe actually received a quite significant overall increase in damage and firepower after the update.

With the obvious buff on attack power and part damage, it's even easier now to break monster parts - something the Switch Axe is known for.

Another buff is the introduction of a new counterattack silkbind: Elemental Burst Counter. Not only does this provide the Switch Axe with a much needed counterattack opportunity, it also fully charges the amp gauge instantly. This gives the spotlight to previously hard-to-charge phials like Power - enabling the Switch Axe to deal significant damage while being comfortable to use!

Can Be Used Against Monster Roars

As this move is a counter, it can be used to bypass monster roars and launch an attack instead of being deafened if used at the right time.

2-Staged Morph Slash Combo is a new Switch Skill for the Switch Axe added in Sunbreak.

This two-staged combo is performed after Wild Swings wherein the weapon morphs into Sword Mode and into Axe Mode.

While under this combo, Sword Mode attacks are more powerful, while attacks in Axe Mode will fill the Switch Gauge faster.

How Good is the Switch Axe?

The Switch Axe improved a lot in the Sunbreak expansion with the addition of a counterattack Silkbind move that not only parries attacks but also instantly charges the Amp gauge to full.

However, this proved to be unreliable and pretty clunky to time, so weaving in the Elemental Burst Counter in your playstyle would be a tall mountain to climb. What's more, the counter costing 2 wirebugs doesn't give too much of a leeway if you failed to execute the move successfully. 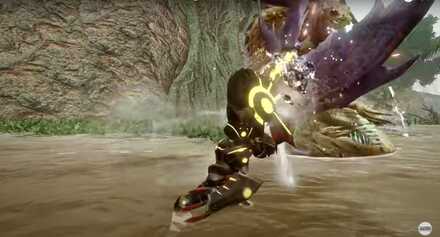 An attack unique to the Switch Axe wherein you can make a high damage attack using a large portion of the energy stored in the Switch Gauge. 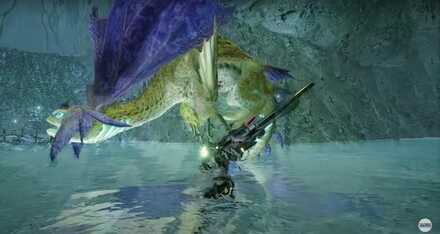 The Sword in Sword Mode uses the effects of a Switch Axe's phial which makes the attacks harder to deflect. Oftentimes, the Sword Mode is used to target tough body parts. 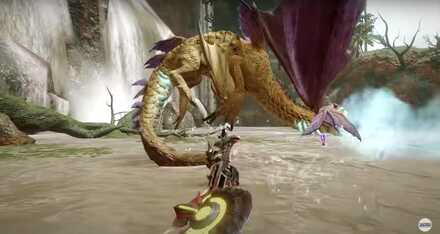 In Axe Form, the Switch Axe has incredible reach. Even going so far as to hit enemies while they are up in the air. 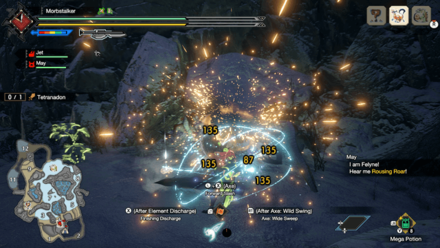 The Switch Axe has reeived its badly-needed counter move in Sunbreak, in the form of Elemental Burst Counter.

Pay close attention to your switch gauge whenever you use your Sword since attacking in Sword Mode consumes the Switch Gauge. Always try to play for an element discharge.

The Switch Axe cannot guard hits. Added to this is your slower movement speed when using this weapon. It's also a weapon not blessed with any new counterattack move.

Attacking with this weapon is mostly taking huge swings at an enemy monster, which carries you forward and makes use of the momentum you have while you are doing attack combos. Having Evade Extender and Evade Window would be huge.

With the arrival of Switch Skill Swap, the Switch Axe can now have access to offensive and defensive kits anytime.

This, however, requires constant use of Wirebugs, and there may be a moment where a hunter will run out of charges to use to evade attacks as it has been previously used to execute Silkbind Attacks.

You are launched forward with the help of a Wirebug as you quickly regenerate your Switch Gauge. This move also negates Switch Gauge usage for a short period of time so feel free to go ham in Sword Mode for a bit!

Invincible Gambit is a forward dashing move consisting of three slashes that has knockback protection during its duration. Use this to tank hits without getting thrown off!

The attacks lead with a slash upwards with the Wirebug, culminating in a targeted Forward Slash to a foe.

On top of that, landing the Forward Slash successfully also fills up the Activation Gauge and creates a large explosion.

This changes your first Axe attack into an Overhead Slash which can hit monster parts high on the ground. The subsequent Sword Morph attack will also change to a Double Slash so there is no reason not to switch to this Skill when acquired.

If you like integrating elemental explosions in your Switch Axe combos, use this Switch Skill. This also has a rocksteady effect so you won't have to worry about getting knocked back.

A more stationary version of the series of Axe Swings done after the Wild Swing. This makes sure your pinpoint accuracy is maintained while dishing damage.

What more, the sword part of this combo charges your amp gauge, making sure your Switch Gauge is properly managed during the fight! It's an alternative (and great way) to charge your amp gauge!

Unlimited Wild Swing makes a return to Monster Hunter Rise. It's an unlimited slash attack that you can use until your stamina runs out. It doesn't deal the best damage but its DPS is good to use if Sword Form is unavailable and the monster gets downed.

The follow-up move to Wild Swing also makes a triumphant return. It's a high damage move that powers up your Axe which makes it an ideal combo finisher for Wild Swing.

A follow-up move to the Heavy Slam finisher. It's an evasive attack that allows you to make a distance from your target. It can be pretty helpful if your stamina gets depleted by Wild Swing's stamina consumption.

Allows the Switch Axe to change to its alternate form. E.g. Axe to Sword and vice versa.

While in Sword Form, you can use Elemental Discharge to unleash a strong attack with a strong finisher. You will be unable to move during this period so only use it against monsters that are vulnerable or those that are not actively targeting you.

With the removal of the Clutch Claw and mantles, executing the Zero Sum Discharge is now harder. It is now a prerequisite to identify the monster's attack patterns to know if their attack can cancel your Zero Sum Elemental Discharge. While the Invincibility Gambit makes it easy to do, it's an overall nerf compared to Monster Hunter World. 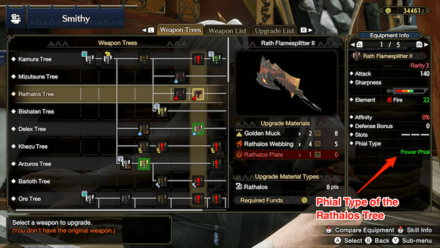 Phials are special features of the Switch Axe that changes the way it deals and maximizes damage. Every Switch Axe along a specific tree will have unique phial types so you might want to keep an eye out for the ones you need!

Here we explain the different phial types and their effects:

This is a combo that you can easily do anytime. It's also versatile and can flow easily into other combos.

It's recommended to start with Double Slash at the start rather than the end, as it is quite slow and leaves you open to attacks.

High Damage Combo For When the Monster is Down

When you down the monster but you're not in the Amped State, this is a combo that utilizes two Double Slashes with two Morphs in between. You can also use the Element Discharge after a Double Slash.

With this combo, you can hit a fast Element Discharge from a Double Slash. This is useful for monsters with hard skin.

A downside of this combo is that it quickly consumes your Switch Axe Gauge, but you can easily recover it with a Switch Charger.

This combo is useful when neither the Power Axe mode nor the Amped State is active. You easily can boost your damage with the Heavy Slam.

Tips on How to Use the Switch Axe

Switch Axe requires that you attack all the time to keep all the gauges at full. The basic combo is to accumulate various Switch Axe gauges by continuously attacking the monster. Once you stop attacking, the gauge will cease to accumulate and even lose its charges.

Learn How to Use the Switch Axe Gauge

Like in Monster Hunter World, Switch Axes in MH Rise have different Phial Types that are unleashed when you reach the Awakening state of the Switch Axe. Each phial has its effects so know how and when to use them in hunts!

Master the Art of Switching

The Switch Axe can be switched between Sword Mode and Axe Mode with both modes coexisting perfectly with each other.

In addition, you can put Rapid Morph in your builds to make switching attacks smooth like butter! 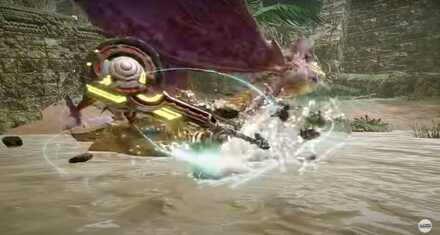 Since you cannot guard with the Switch Axe, you are better off releasing an unrelenting flurry of blows against a monster. With the help of the new silkbind attack called Invincible Gambit, you are immune to flinches and knockbacks. Essentially making you a force of nature to be reckoned with.

If you are DPS-heavy, we suggest getting Soaring Wyvern Blade! This attack imbues phials on your downward dash while also dashing across in the air. Not to mention, it looks very cool too! 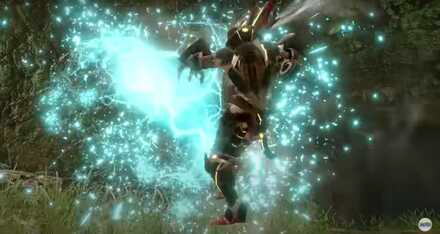 You enter an Amped State once you land enough hits with the Sword Mode, which in turn also fills up your Switch Axe gauge. You can release a high damage blow in exchange for a large portion of energy. 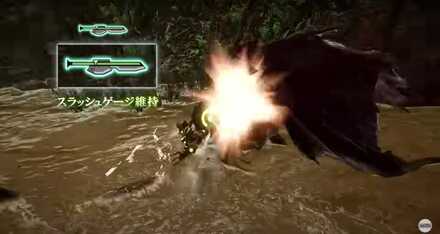 This is Switch Axe's most damaging move where you attack a monster and unload all your phial charges. As a Switch Axe user, you should always aim for this whenever an opportunity arises. This also provides Super Armor in MH Rise which won't throw you off whenever you use it so just go ahead and do it!

In order for us to make the best articles possible, share your corrections, opinions, and thoughts about 「Sunbreak Switch Axe Guide: Combos, Controls and Moveset | Monster Hunter Rise」 with us!