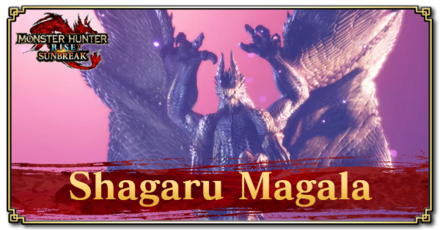 This is a hunting guide for Shagaru Magala, a Elder Dragon in Monster Hunter Rise (MH Rise), and the Sunbreak DLC. Read on to learn Shagaru Magala's weaknesses, forgeable weapons, forgeable armor, drops, and attack patterns for Master Rank!

How to Unlock Shagaru Magala 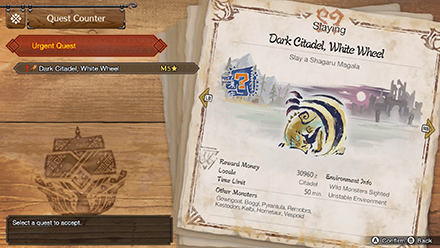 The Shagaru Magala Urgent Quest is unlocked by completing 2 Key Quests after defeating Malzeno in Witness by Moonlight. 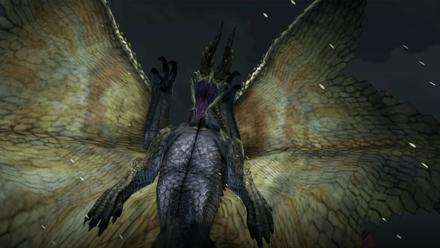 Shagaru Magala use a variety of attacks—including area breath attacks and explosive pollen—and wield their black scales to even deadier effect than Gore Magala. The Frenzy is as much of a threat as ever, so don't forget to bring Nulberries. Keep you eyes and ears peeled for powerful wingarm strikes and their bevy of breath attacks. 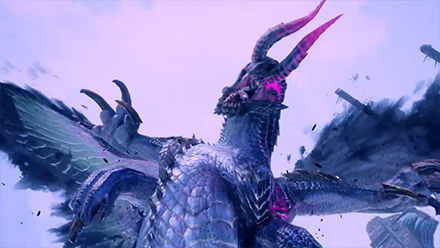 How to Beat Shagaru Magala

Shagaru Magala will periodically attack using dark-colored clouds that inflict Frenzy. While in this state, a new gauge will appear on the upper left side corner of the screen beside the Hunter's name.

Overcome the Frenzy by going to the offensive and attacking Shagaru Magala before the gauge fills up. Overcoming the Frenzy gives the hunter a temporary affinity boost and immunity to being infected with the Frenzy for a short while.

When you think you can't overcome the Frenzy before the gauge fills up, you can use Nulberries to lessen the progress of the gauge. This helps if Shagaru Magala is unusually aggressive and you can't find an opening to attack.

Shagaru Magala has two rage modes, each giving it access to some unique moves. You can easily identify which rage mode S. Magala is entering by the roar animation.

Target the Head When Enraged

When Shagaru Magala is enraged characterized by a frenzy cloud on its mouth, you should focus your attacks on the head. Dealing enough damage on the head will cause Shagaru Magala to topple down, giving you free hits.

Horns Can Be Broken Twice

Take note that it is possible to break Shagaru Magala's horns twice. Don't stop hitting its head to maximize all Broken Part rewards!

Safest Place is Near The Abdomen

Shagaru Magala has a lot of full frontal assault moves that targets anything infront of it.

If you're having a tough time, we suggest staying underneath Shagaru Magala near its abdomen. Most of its move do not reach this area and it also gives you visibility to react to its moves.

Traps Do Not Work At All

Shagaru Magala slams its wingarms with full force, cracking even the ground beneath.

Shagaru Magala uses its strong wingarms with full force to quickly take a swipe on enemies in front of it.

Shagaru Magala can use the full force of the Frenzy to expel a strong beam from its mouth. These moves only happen while on Ultra Frenzied Mode.

In order for us to make the best articles possible, share your corrections, opinions, and thoughts about 「Sunbreak Shagaru Magala: Weakness and Drops | Monster Hunter Rise」 with us!