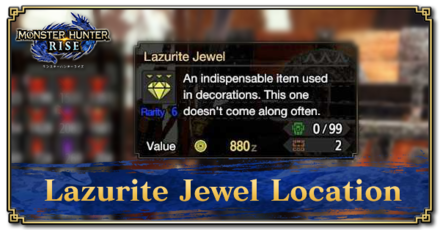 This is a farming guide for Lazurite Jewel, an item in Monster Hunter Rise (MH Rise). Check here for all Lazurite Jewel locations and drop sources, as well as Lazurite Jewel uses in equipment and decoration crafting.

Lazurite Jewel - How to Farm

Obtained from Quests from HR8 and Up 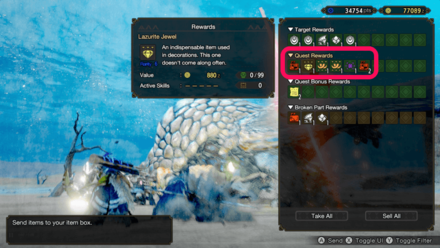 Lazurite Jewels can be obtained as a Quest Reward from quests that become available at HR8. Take note that its appearance is incredibly random, so the amount you can get can range from 0 to 3 from one quest. 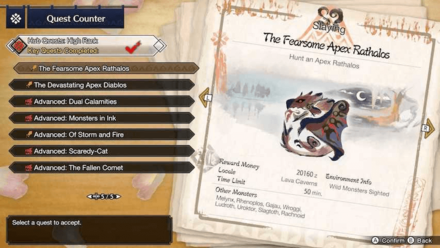 Compared to standard Quests, non-Rampage Apex Monster Hunts appear to have a much higher rate for obtaining Lazurite Jewels. They can be obtained as either Quest Rewards or Additional Rewards, and as many as 8 Lazurite Jewels in one Quest have been confirmed.

In general, non-Rampage Apex Hunts tend to drop an average of 3 Lazurite Jewels, compared to around 1 Lazurite Jewel obtained in standard Quests.

If your build has room, or if you've got a servicable Talisman, completing Apex Hunts with Good Luck equiped can yield even more Lazurite jewels if you're lucky!

Do Event Quests for Extra Loot! 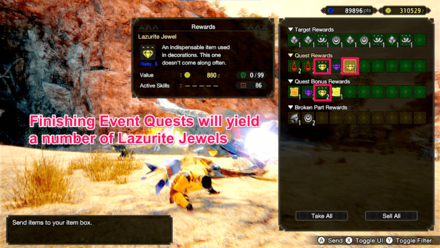 If you are looking to farm Lazurite Jewels, we also suggest doing some High Rank Event Quests while you're at it! Event Quests reward you with additional content like stickers, gestures, and layered armor - definitely something worth considering.

Talk to Bahari at the Elgado Outpost to get this item in exchange for 15 Investigation Coins.

Lazurite Jewel - How to Use 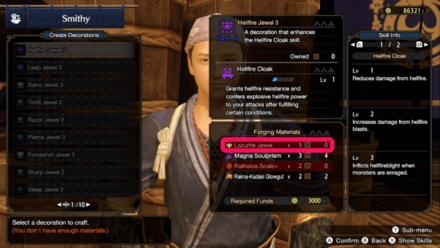 Upon reaching HR8, you get a bunch of new decorations that you can craft at the Smithy. They require a lot of Lazurite Jewels, so make sure you have enough!

In order for us to make the best articles possible, share your corrections, opinions, and thoughts about 「Lazurite Jewel Location: How to Get and Uses | Monster Hunter Rise | MHR (MH Rise)」 with us!