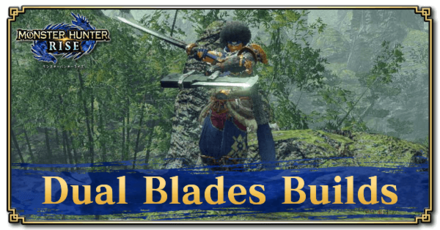 This is a guide to the best builds and equipment for Dual Blades in Monster Hunter Rise (MH Rise) for the Nintendo Switch. Learn about the best Dual Blades, and the best Skills and Armor pieces to use with the Dual Blades for Low Rank, High Rank, and endgame.


This is a developing guide for Best Dual Blades Builds & Equipment. If you have any suggestions or additional information, please comment them below!

The Night Wings Dual Blades takes our generally best raw dual blade builds. While there are more other options like the Tigrex Rex Slicers that can be build with some affinity to offset its negative affinity or the Raging Claws that grants 100% chance to critically strike when in Demon Mode, Night Wing is the more accessible and easier Dual Blades to build around with.

For our blast build, the Sinister Famineblades is the best Dual Blade choice due to the fact that there aren't any other choices to begin with. For Rampage Skills, Blast Boost is the way to go as our build doesn't make use of the Hellfire Cloak skill from the Magnamalo armor set.

On paper, Fortis Gran might seem like a superior dragon weapon but Ro Waga's rampage skill choices and extra slot makes it a way better dragon elemental DB than Fortis Gran. For Rampage skills, Dragon Exploit or Dragon Boost would both work and for slots, slotting in one more Dragon Jewel is the best choice.

For Gnashing Flammenschild, make sure to take the Affinity Boost II to reduce the negative affinity of the weapon. For decorations, 1 Blaze Jewel and 1 Expert Jewel would suffice.

For Gelid Soul, Dulling Strike or Ice Boost III will work as a rampage skill. For Decoration, slotting an Expert Jewel 2 in its level 3 slot is highly recommended as there are no level 3 decorations that would suit this current build.

We opted for Mud Twister instead of Jyura Pulverizers because of the negative affinity that Jyura Pulverizer has and the Mud Twister's high water element. For slots, it works best with 1 Expert Jewel 2 and one Stream Jewel and for Rampage skills, Element Exploit is the way to go.

Despot's Blitz is hands down, the best thunder dual blades at the end game. Thunder Boost II is its best Rampage skill and for slots, adding an Expert Jewel 2 will ramp up your damage.

A raw dual blade build featuring the Night Wing Dual Blades from the Nargacuga Tree. Despite having lower base damage than some Dual Blades, we chose the Night Wing due to its insane affinity rate of 40% as well as its white Sharpness. Due to its thin White Sharpness level, we focused our build on the Protective Polish and Speed Sharpening skills to always maintain the damage bonus obtained from it.

A comfort build that makes use of several stamina skills and evasion skills to massively increase your mobility during fights. All your damage comes from the blast damage you get from Sinister Faminblades plus Blast Attack up and is a very safe build to play on higher ranked quests. Dodge all those attacks and keep on applying the blast ailment!

There's extremely minimal changes in our Endgame elemental build. We'll be swapping out the Aelucanth Helm for a Zinogre Helm. This is to get the last point of Weakness Exploit for 50% affinity against weak spots. We'll still have 3 Critical Element by slotting a critical element deco on the Remobra Gloves and with Latent Power and level 6/7 (depending on weapon) critical eye, we'll be able to reach 90/100% affinity which opens up new weapons for us with negative affinities.

With 6★ to 7★ quests, you'll finally be able to get some decent elemental damage. Below are the best elemental DBs you can use for the high rank stages of the Hub Quests. For the Dual Blades in this rank, we'll be prioritizing elemental dual blades with affinity stats in them as we only have 50% affinity when hitting enemy weakspots. Without using weapons with affinity, our DPS will greatly drop so we have to focus on being able to use Critical Element first rather than focusing on raw damage potential.

Unfortunately, there are no flame elemental dual blades with decent affinity stats so we settled with Dayreak daggers with its high raw base damage and 25 fire elemental attack.

A glass build that focuses on maximizing Critical Eye to get max value from Critical Element 3. With this set, we get a 70% affinity when striking enemy weakspots which will also trigger the critical element bonus damage. Kamura Braces S can be swapped out with Alloy Braces S to get more defense stat and be able to replace Heroics with Water Attack 1.

For the skills, Heroics and Dragon Attack are just extras obtained from stray skills in some armour but from these skills, Constitution is the most useful one as it can save some stamina for some extra dodges during fights.

Stealth Dango have a solid 190 raw damage build which is way superior than the other DBs you can craft at this point in the game. It also has a sleep attribute which works great together with the Blastslash dango to improve your Large Barrel Bombs to Mega Barrel Bombs for some burst damage.

Blastslash Dango Effects and How to Unlock

The best part of the Stealth Dango II Dual Blades is its ease of crafting which only requires a Slagtoth Hide+, a Coma Sac, and an Excite Shroom which are all really easy to get and it can be crafted as soon as you reach HR 4. remember to use Dulling Strike rampage skill too to maximize its green sharpness bonus damage. 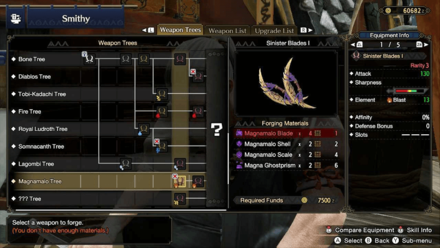 Sinister Blades I offers solid stats across the board. Its Blast element makes it an excellent weapon for most hunts in this stage of the game. Just don't use it against blast resistant monsters or your DPS will greatly dampen! 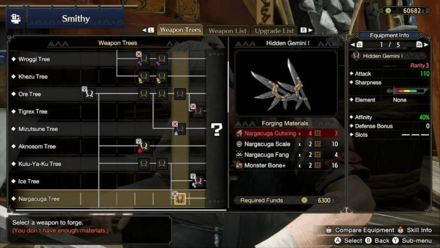 Hidden Gemini I is an excellent weapon to craft if Affinity is your main priority! This particular pair of Dual Blades have an amazing 40% affinity rating.

Below are the best elemental dual blades you can use for the Mid Game.

This armor combination offers comfort and utility to its wearer. Evade Extender affects the distance covered of your dodges in Demon Mode, increasing its effectiveness during fights. Razor Sharp prevents sharpness loss when activated.

This set is catered to those who prefer to go all out on damage. Latent Power reduces stamina depletion by 30% when activated and is a great solution to the Dual Blades' stamina-hungry playstyle. However, it's not a buff that is permanently active so always watch when Latent Power triggers to maximize the build's effect. 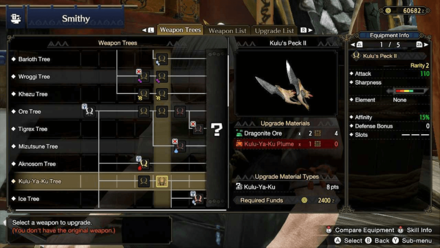 Kulu's Peck II offers great stats across the board and provides a 15% affinity boost to its wielder. 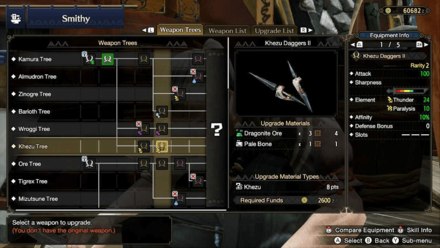 Khezu Daggers II has great stats and offer two useful elements at this stage of the game on the same weapon. 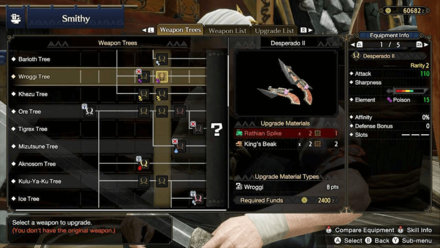 Desperado II's base stats are basically identical to Kulu's Peck II — The only difference is that Desperado has Poison. Consider crafting this pair of Dual Blades if you prefer to inflict quick poison ailments to your targets.

This armor combination offers a balance between affinity and utlity. Constitution reduces the stamina depletion of actions with fixed stamina costs (such as Evading and Blocking) by 20% at level two.

The elem in Rise seems really weak. Been running a set more focused on Crit Eye/Crit Boost/ & Wex then supplementing evade/constitution boosts via decs and talismans. Really lets you get the most out of the Night Wing blades instead of going for a blast build

I think the dual sword of nargacuga is the best, 190 raw + 40 % affinity and white Sharp

Register as a member and get all the information you want. (It's free!)
Login
Opinions about an article or post go here.
Opinions about an article or post
We at Game8 thank you for your support.
In order for us to make the best articles possible, share your corrections, opinions, and thoughts about "Dual Blades Builds and Best Equipment | Monster Hunter Rise" with us!
When reporting a problem, please be as specific as possible in providing details such as what conditions the problem occurred under and what kind of effects it had.