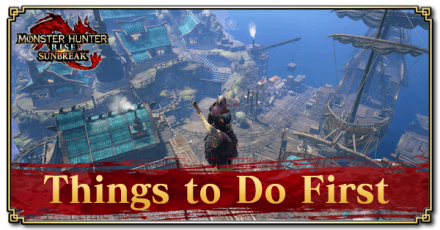 This is a beginner's guide on how to get started in Sunbreak, how to proceed through the early game, and what things to do first in the Sunbreak DLC for Monster Hunter Rise. Learn what equipment to craft first, what order to do each Quest, and what to do if you get stuck.

Best Equipment for the Early Game 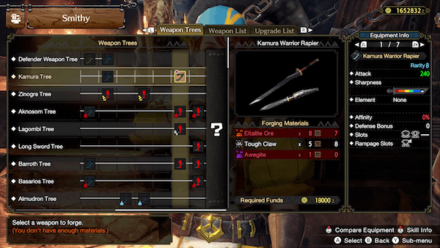 The Rarity 8 weapons at the end of the Kamura Tree are simply stronger than those which were achievable in High Rank. They boast a long Blue Sharpness gauge, and ④① Decoration slots across all weapon types. Crafting a Kamura weapon is a great first step when starting in on Master Rank quests.

Can be easily crafted in one step

Each of the materials needed are easy to obtain from mining ore and farming small monsters. In addition, there's no need to craft any of the preceding weapons in the tree to make the Rarity 8 weapons, allowing players to simply craft them in one go.

If you choose to craft new Armor at the start of Sunbreak, the Hunter X Set is your best bet. They provide Defense as high as the strongest High Rank armor at full upgrade levels, and include Skills such as Attack Boost and Stun Resistance which are useful in a variety of situations, so for a temporary early game set, it works just fine. The materials also consist of ore and small monster parts which are easy to obtain.

No need to make if your High Rank Armor is upgraded

If you've already made High Rank armor and fully upgraded it with Armor Spheres, you won't have any problem in the early stages of Master Rank. As the Defense values of the Hunter X Set aren't hugely better than endgame High Rank armor, and you likely already have a build suited for your playstyle, you're best off sticking with what you've got until for the early stages.

How to Get Started in Sunbreak 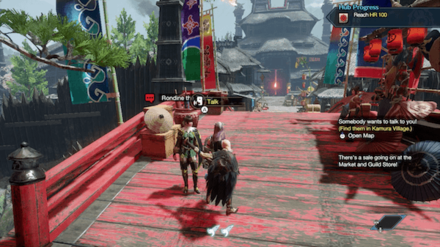 Upon loading up the game after downloading the Sunbreak DLC, you'll find Rondine standing at the bridge at the entrance of Kamura Village. After talking to her, an Urgent Quest will be automatically unlocked. Talk to Minato at the Hub and take on the quest to fight Daimyo Hermitaur.

Upon completing the Urgent Quest, talk to Fiorayne to unlock Master Rank and sail to Elgado. 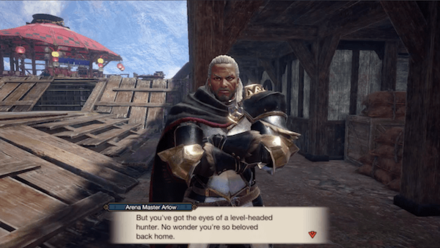 After unlocking Master Rank, talking to Arena Master Arlow will unlock a training quest for the new Switch Skill Swap technique. When fighting powerful monsters in Master Rank, you'll want to have already mastered this new skill, so go ahead and get familiar with it now before you get thrown into the real action.

New Switch Skills have also been added in Sunbreak, so using the Switch Skill Swap is a good way to get familiar with new skills while still having your familiar set in reserve.

How to Switch Skill Swap 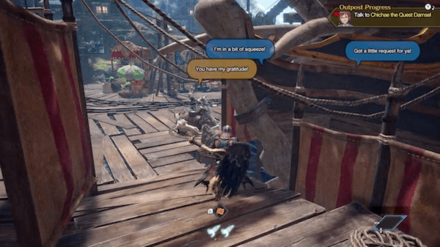 Each time you complete an Urgent Quest, the Villagers around Elgado Outpost will have new things to say to you. When you talk to them, you'll unlock new features and Requests, which will be gated behind these conversations. It's tempting to jump into new Quests right away but always be sure to talk to everyone in town to make sure you don't miss out on unlocking important features and getting progress for available Requests.

Progress with the Red Indicator in the Top Right 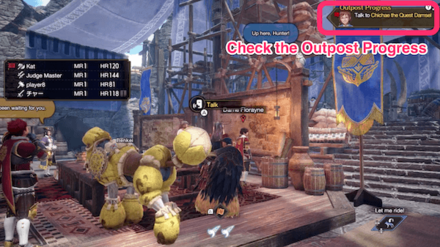 If you're ever unsure what to do next, the indicator in the top right corner of the screen will tell you who to talk to or what to do to progress with the story.

When you open the Detailed Map, the area which you need to go to will be marked in red as well, so fast travel there to find the person you need easily.

You'll find the Cohoot Nest in Elgado Outpost on top of the back wall of the Command Post. You can find Eurekacorns here which you can use to improve your Buddies' Skill Memory and let them learn more Skills than they were previously able to.

Don't forget that even while you're in Elgado, you can still go back to the Buddy Plaza to get the Cohoot Nest rewards there too!

Use a Gathering Palico and Swap its Support Moves 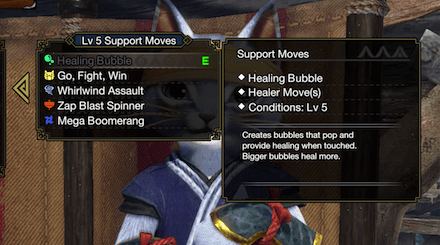 The Gathering Palico Support Type is the best type to bring into Master Rank as it will continue yielding Master Rank-level resources for you throughout the game, allowing you to craft better Equipment and stay on par with the new and more powerful Monsters in each new rank.

New to Sunbreak, you can change out certain Palico Moves as well, so even if you use a Gathering Palico, you can switch out one of its moves to better match your playstyle.

Completing each of five Requests will unlock a new Secret Support Move for your Palicos. These Skills are much more powerful than the Support Moves up to this point, so prioritize unlocking them as soon as possible!

In particular, the Lottery Box Support Move can summon the powerful Kittenator, which will deal 300 damage to a monster and knock it down.

What to Do When You Get Stuck

Upgrade your Base Game Equipment

If you're having trouble defeating Daimyo Hermitaur and progressing into the Master Rank, your current weapons and armor might be underpowered. Be sure that you have High Rank weapons and armor equipped, and upgrade your armor with Armor Spheres. So long as you're fully equipped, you should be able to defeat Daimyo Hermitaur and make it into Master Rank.

Use the Black Belt S to Save Time

If you haven't gotten it yet, the Black Belt S set is available for free from Senri the Mailman. This set has High Rank-level defenses and reliable skills like Attack Boost and Earplugs to help you blast through Low Rank and work your way to Master Rank without having to spend time farming early and midgame weapons and armor.

Builds and Best Equipment for Each Weapon 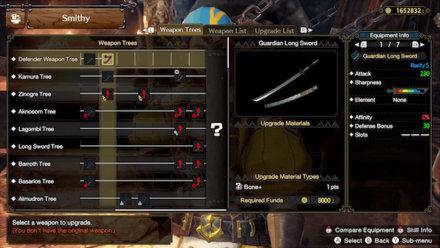 If you're not able to upgrade to the Kamura Tree just yet, the Defender Weapon Tree is available even before getting into Master Rank. It doesn't have any slots or Affinity, but it has the powerful Blast Element, and its Attack power is relatively high, so it can prove a fair substitute.

Check any Balance Changes to your Main Weapon

After the 10.0 update released with Sunbreak, each weapon type has been adjusted with new buffs and nerfs. If you're struggling with your weapon, it may be that a nerf to one of your main strategies is hurting your damage output.

The Long Sword has received heavy nerfs to some of its most important Silkbind Attacks, so if you've found that your powerful combos don't dish out the same damage they used to, you might want to try different Silkbind Attacks and see how they stack up.

In order for us to make the best articles possible, share your corrections, opinions, and thoughts about 「Sunbreak Beginner's Guide: Tips and Tricks | Monster Hunter Rise」 with us!