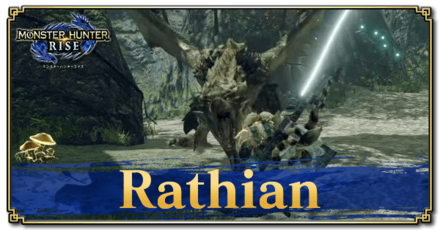 This is a hunting guide for Rathian, a Large Monster in Monster Hunter Rise (MH Rise) and the Sunbreak DLC. Read on to learn Rathian's weaknesses, forgeable weapons, forgeable armor, drops, and attack patterns for Master Rank!

How to Unlock Rathian 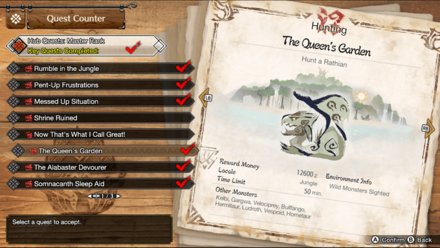 Master Rank Rathian is unlocked after completing the M★2 Urgent Quest Scarlet Tengu in the Shrine Ruins and reaching MR 2 in the Sunbreak expansion. 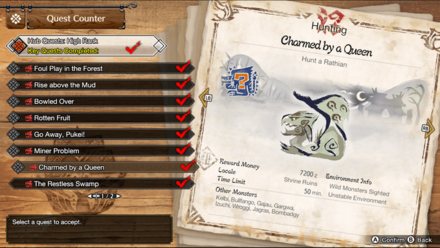 High Rank Rathian is unlocked after finishing the Urgent Quest The Restless Swamp and reaching HR 5. 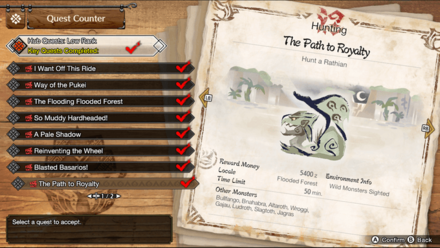 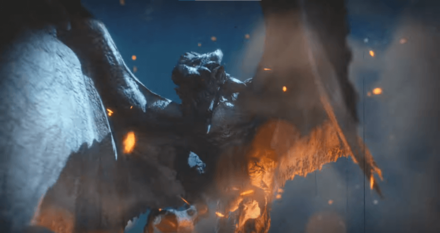 The strong venom in her tail, along with the wide reach of her sweeping attacks, makes maneuvering around the Rathian a dangerous feat. Cutting off her tail can give you quite a bit more breathing room.

How to Beat Rathian

Rathian will take time to refocus after every somersault and fire breath attack. Use this short opportunity to get some hits in.

Do take note that there is a chance for Rathian to do two somersault attacks consecutively, so stay vigilant!

Rathian's weakness is found in the head but it also holds the most danger! Only try to hit its head when there is a safe opening.

Rathian's poisonous tail is the reason why its Somersault attack is incredibly deadly. Severing the tail with cutting weapons such as the Long Sword, Charge Blade, and Dual Blades can make the hunt a lot easier!

Attack the Feet to Take It Down

When Rathian falls, it will be open for attacks for quite a while. To do this, hit its feet multiple times until it trips!

Safest Area is Behind Rathian's Feet

It is possible to play safely against a Rathian when you attack it near its tail. You will be able to see its dangerous somersault attack and tailspin attacks while at the same time being safe from fire breath attacks!

Use Flash Bombs When Rathian is Airborne

It is recommended to throw Flash Bombs whenever Rathian is flying to bring it crashing down the ground. While airborne, hunters with melee weapons may have a hard time attacking Rathian, so forcing it to come down is advisable.

Additionally, Rathian will be vulnerable for a short period of time upon crashing, so take the chance to attack with all your might!

The Rathian is weakest against Thunder and Dragon element attacks, weapons, and tools. It is ideal to aim for its head as a weak point but prioritizing the removal of its poisonous tail is also an option.

Apart from its attacks in Low and High Rank quests, Rathian uses the following moves in Master Rank.

In addition to the new charge attack combos, Rathian had also received a boost in its movement speed for Master Rank! The moves are noticeably quicker, so watch out!

Master Rank Rathian likes to perform charging combos when faced in Master Rank hunts. It usually stays stationary for a moment before performing the combos.

Rathian has the ability to spit out fire from its mouth. This attack has variations.

In order for us to make the best articles possible, share your corrections, opinions, and thoughts about 「Sunbreak Rathian: Weakness and Drops | Monster Hunter Rise」 with us!