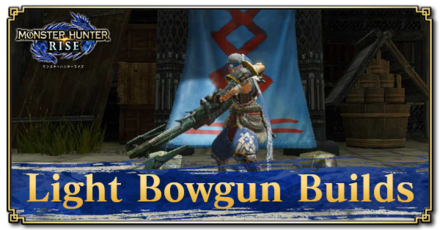 Sinister Shadow Bolt retains its throne amongst the new Spread Light Bowguns in Update 3.0 primarily due to its amazing ammo capacity!

After a bit of tweaking, we've replaced Attack Boost and Partbreaker from our 2.0 Pierce and Slicing Build with Weakness Exploit and Critical Boost instead while retaining its QoL skills.

Since Spread and Slicing Ammo work best when aimed towards weak spots, these skills are absolutely welcome changes that allows us to hunt the new monsters of Update 3.0 better!

Night Owl reclaims the top spot for Piercer LBGs because of its 40% affinity rating. This high base affinity is a great compliment for builds that take advantage of Valstrax Braces, like our build below!

This straightforward build reaches 90% affinity on weak spots while maintaing all of the QoL and Shot Up skills that our previous Pierce & Slicing Build had. The addition of Weakness Exploit and Critical Boost allows us sever tails and break parts more efficiently with Slicing Ammo.

Pierce Ammo 2 and 3 damage are also maximized through these affinity skills and Pierce Up.

Lastly, Wirebug Whisperer is retained in our 3.0 Build to improve the usage of silkbind moves such as Silkbind Glide, and Fanning Maneuver.

Our Rampage Skill Setup gives Rampage L Bowgun S five shots of Rapid Fire Sticky Ammo 1 per clip. We can also shoot our explosive rounds while moving too, making it extremely easy to use during tough fights!

Rampage L Bowgun S' amazing ammo capacity and ability to rapid fire Sticky Ammo 1 allows us to replace Ammo Up from our previous Sticky Ammo Build with Rapid Fire Up instead. This particular skill, when combined with Artillery and Attack Boost, lets Sticky Ammo 1 reach viable damage levels across all hunts in Update 3.0!

This is a quick and easy Rapid Fire build focused on powering up slicing ammo for Monsters like Bazelgeuse. Since it only requires a Lv 2 Spare Shot Talisman, its rather light on melding RNG. Be ready to craft on the fly with this build as Slicing Ammo's capacity is rather low.

Sinister Shadow Bolt edges out the competition with its great stats and clip sizes once again, proving it to be the best LBG at this stage of the game.

Night Owl maintains its place as solid alternative for our Pierce and Slashing Build due to its 40% affinity rating and ability to Rapid Fire Pierce Ammo 2.

Our Pierce & Slicing Ammo Build at the start of HR8 remains unchanged for the climb towards HR100 in Monster Hunter Rise.

Primarily built around Pierce Ammo 3, piercing damage is increased through Pierce Up, Attack Boost, and Partbreaker.

Take note that you do not have to use Sniper Jewel 1 if you opt for the Night Owl instead of Sinister Shadow Bolt with build.

Sinister Shadow Bolt is still the king of Spread Ammo at Monster Hunter Rise's current endgame due to its great stats and amazing clip sizes!

Similar to our Pierce and Slashing Ammo Build above, this build is still the same build we recommended at the start of your HR 8 to 40 climb.

Primarily built around Spread Ammo 3, damage is increased through Spread Up and Partbreaker. Additionally, Ammo economy is greatly improved with the addition of Spare Shot.

Furious Flammenkanone is the best Sticky LBG of Update 2.0 due to its high base damage and because it is one of the few LBGs that can dish out Sticky Ammo 3.

Once again, our Sticky Ammo Build at the start of HR 8 is still the same at HR 40+. Furious Flammenknone's Sticky Ammo 3 clip size and ammo economy are improved through Ammo Up and Spare Shot respectively.

Lastly, damage is improved with the help of Attack Boost and Artillery.

Sinister Shadow Bolt's amazing stats and clip sizes makes the climb from HR 8 to HR 40 relatively easy, making it the best Light Bowgun to accompany most builds at this stage of the game.

Night Owl is a solid piercing alternative due to its 40% affinity and ability to Rapid Fire Pierce Ammo 2. Additionally, you won't need Sniper Jewel 1 when you use this with our recommended set below due to its minimal deviation.

Revolving around Pierce Ammo, this build maximizes damage through Attack Boost, Pierce Up, and Partbreaker. Sinister Shadow Bolt's general performance is improved via Recoil Down, Reload Speed and Steadiness.

Sinister Shadow Bolt's amazing clip sizes allows us to use it as the centerpiece of our Spread and Slicing Ammo Build. Making the climb from HR 8 to 40 a breeze!

Rise's version of a community favorite, this build takes advantage of the Sinister Shadow Bolt's lv3 Spread Ammo by pumping as much damage as possible! Ballistics is added to increase the critical range of Spread Ammo, allowing you to shoot from farther away.

Wirebug Whisperer is once again added to drastically improve the usage rate of all of your silkbind-related maneuvers.

Furious Flammenkanone is the best Light Bowgun for Sticky Ammo Builds due to its very high attack rating (230). While it only has one round in its Sticky Ammo 3 clip by default, our recommended set below comes with Ammo Up Lv. 3. This allows us to take advantage of this particular Light Bowgun's insane attack rating as a base!

Built exclusively for the Furious Flammenkanone and Sticky Ammo 3. This build adds an extra round per Sticky Ammo 3 clip with the help of Ammo Up Lv. 3. Ammo economy is improved through Spare Shot while the damage is improved via Attack Boost and Artillery.

Night Owl's great stats and relatively easy handling (recoil and reload speed) allows you to climb to the very top of 7★ quests with ease.

The Gale Bowgun offers great stats and has both Pierce and Spread Ammo in its arsenal, making it a perfect choice for all hunts in this stage of the game.

Prioritizing Gale Bowgun's Lv. 3 Pierce Ammo, this set aims to maximize this specific ammo type while increasing the damage for all ammo types as well through Critical Eye.

Magnamalo's Sinister Bowgun I has great stats across the board and good magazine sizes for the four main ammo types: Normal, Pierce, Spread, and Sharpnel.

This particular Light Bowgun can fit most playstyles and excel at every hunt in the mid game — Provided you can handle its relatively high recoil!

Those who love using Pierce Ammo will greatly appreciate the Hidden Eye I. This Light Bowgun offers decent magazine sizes for all of its Pierce Ammo levels, paired with an insane 35% affinity rating.

Its high recoils for Pierce Ammo Lv. 2 and 3 can be managed by Silencer Mods or the Recoil Down skill

Most Light Bowguns at this stage of the game pack high recoil for some of their ammo types.

This set aims to manage this via Recoil Down while bolstering affinity using Critical Eye and Latent Power, striking a good balance between offense and utility.

Great Izuchi's Wind Thief L. Bowgun II is a great Light Bowgun that features good stats and a generous variety of available ammo types, making it fit for any hunt at this stage of the game — It can even sever monster tails via Slicing Ammo!

While it does pack a bit of recoil, this can be easily managed by using a Silencer Mod.

This straightforward set aims to improve your Light Bowgun's magazine sizes via Ammo Up while bolstering offense through Critical Eye and Attack Boost.

If you prefer a bit more help with recoil, consider swapping Ingot Greaves for Bnahabra Boots instead.

Register as a member and get all the information you want. (It's free!)
Login
Opinions about an article or post go here.
Opinions about an article or post
We at Game8 thank you for your support.
In order for us to make the best articles possible, share your corrections, opinions, and thoughts about "Light Bowgun Builds and Best Equipment | Monster Hunter Rise" with us!
When reporting a problem, please be as specific as possible in providing details such as what conditions the problem occurred under and what kind of effects it had.