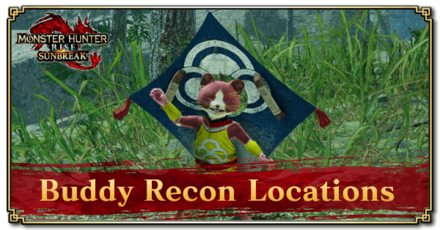 The majority of Buddy Recon Points are unlocked automatically together with the feature, but there are 6 Recon Points which must be found by the player on the Map.

The hardest of all the Buddy Recon Points to reach is here in the familiar Frost Islands. From the high plateau at the northmost point of Area 9, wirebug up to find a mountain with a single side which can be climbed. From there, you'll find two platforms leading across the gap; wirebug across, but be careful as you can't climb on the walls here normally. On the second platform, you'll find a shrine with the Buddy Recon Point inside, and Jewel Lilies on the far end.

In the long passageway on the lower level, wirebug up the cliff on the left side to find the Buddy Recon Point in the tunnel.

The first Buddy Recon Point in the Jungle is found in the top level of the area, near a large tree trunk.

Another simple Recon Point, climb up the wall pictured in the map and you'll find the Recon Point in no time.

Another fairly simple Recon Point, the first location in the Citadel is found on a high plateau near a broken roof.

The last Buddy Recon Point in the Citadel is a tricky one. Approach the icy wall from the south, and wirebug all the way up to the top, ignoring other passages and entrances into the wall. On top of the mountain, you'll find the spot near the southwest edge.

How to Use Buddy Recon

Set Up from Meowcenaries Menu

Between Quests, you'll need to set up Buddy Recon Points by assigning Buddies to each Map. Talk to Nagi the Buddy Agent in the Market Area of Elgado Outpost to access the Buddy Piazza. From there, select Meowcenaries to find the Buddy Recon option.

Assign a Buddy to Each Map

The one cost of assigning a Buddy is that it ties up the Buddy, so you can't bring them on Quests. On the upside, since the Level of the Buddy has no effect, you can send your low-level Buddies on Buddy Recon with no penalty, unlike the Argosy or Meowcenaries. 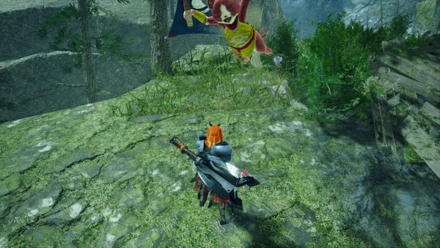 When on a Map where you have Buddy Recon set up, you can fast travel to the Recon Point once per Quest. Traveling to the point costs 100 Kamura Points, but it's a small price to pay for an extra fast travel point!

In order for us to make the best articles possible, share your corrections, opinions, and thoughts about 「Sunbreak Buddy Recon Locations Guide | Monster Hunter Rise」 with us!