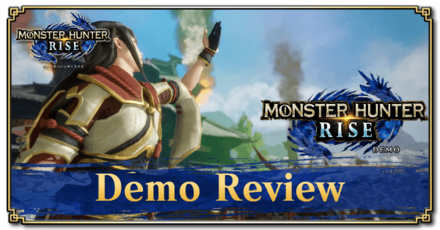 This is a review for the demo of Monster Hunter Rise (MH Rise) on Nintendo Switch. This summarizes our positive and negative insights after exploring the demo on Switch and the new changes to Monster Hunter in MH Rise.

What do you think about the Monster Hunter Rise (MH Rise) Demo?

So great! Going to buy the full game! 8
Votes
Enjoyable! 0
Votes
Kinda meh. Will buy on sale. 0
Votes
No thanks, I'll stick with World 0
Votes

Got other thoughts?
Sound off in the comments section!

Our Rating of the Monster Hunter Rise (MH Rise) Demo

Take note that this rating is for the demo version of the game. Expect a new review when the full game drops or a new demo comes out!

Things that We Liked

The Wirebug Mechanic is Excellent

We first saw the wirebugs in action during the very first Monster Hunter Direct back in 2020 and were amazed by it. Fast forward 2021 and we are still amazed when we got to try it hands-on. It is a very good addition to the franchise and we hope Capcom gets to keep it (or a version of it) for the next Monster Hunter games!

Graphics are Excellent for a Portable Game

Considering that this game runs on the Nintendo Switch, Capcom's RE Engine is proving capable of running smoothly on comparably weaker hardware (vs. the Playstations and XBoxes)!

There is a decent render distance that is amazing for Nintendo Switch standards. Lessening (or lack thereof) of anti-aliasing is not noticeable as well because monster fights still look relatively appealing to the eye!

Of course, there is a noticeable lack of environmental details like shrubbery as well as overall light effects but those are menial things that do not degrade the overall graphical experience of the game. Comparing this game to the last Portable game the Monster Hunter Team released (Monster Hunter Generations Ultimate for the Nintendo Switch), the difference is night and day.

Little to No Bugs and Glitches 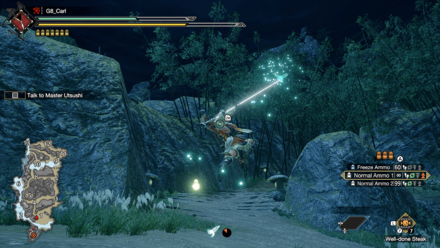 For a game with tons of things to render and process, it has virtually no bugs and glitches during our gameplays. The game runs on a fairly smooth 30fps with some noticeable dips on online multiplayer hunts. (Palico effects are too much) 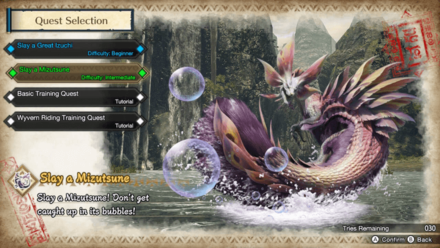 Capcom did not skimp on giving us a fairly difficult fight for the demo! They pit us against a Mizutsune, a challenging monster that last appeared in Monster Hunter Generations Ultimate. Players who only started playing in Monster Hunter World are in for a treat! 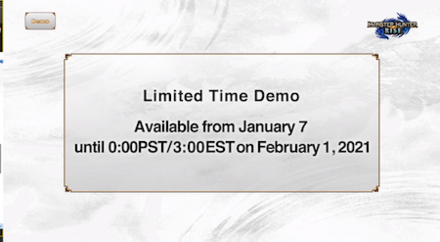 In contrast to World's three-day demo access, Monster Hunter Rise (MH Rise) has a three-week demo access. This enables hunters to enjoy the game for a longer period with friends or solo!

No Equipment Stats and Details Section 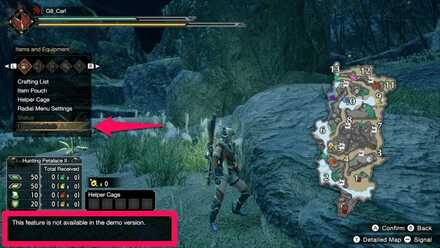 We honestly hoped that this time around, the game will show us the equipment stats and details to better judge them! We are honestly left with things to figure out for ourselves like the ammo types of the Bowguns and the elemental affinity of weapons. 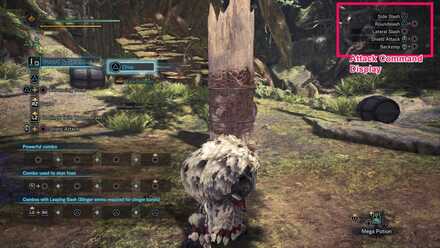 Unlike in World, there does not seem to be an attack command display that helps the hunter with the attack commands. We hope that this is implemented in the full game to better cater to the newer audiences.

Considering this demo is made to familiarize players with the fourteen weapons along with the unique wirebug actions tied to them, we are sad that they did not include access to the training area. This could have been a perfect opportunity for players to sink their teeth on the different newly-introduced weapon mechanics for each weapon!

In order for us to make the best articles possible, share your corrections, opinions, and thoughts about 「Switch Demo Review | Monster Hunter Rise | MHR (MH Rise)」 with us!