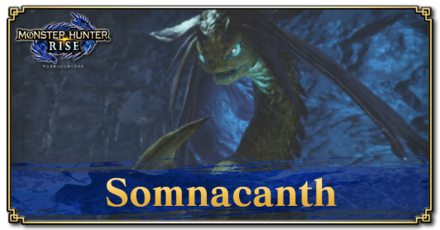 This is a hunting guide for Somnacanth, a Large Monster in Monster Hunter Rise (MH Rise) and the Sunbreak DLC. Read on to learn Somnacanth's weaknesses, forgeable weapons and armor, drops, and attack patterns for Master Rank!

How to Unlock Somnacanth

Complete Scarlet Tengu in the Shrine Ruins in Master Rank 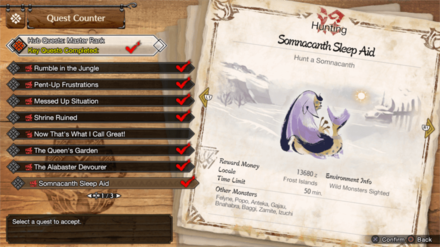 MR Somnacanth is unlocked by completing the Urgent Quest Scarlet Tengu in the Shrine Ruins and reaching MR 2 in the Sunbreak expansion. 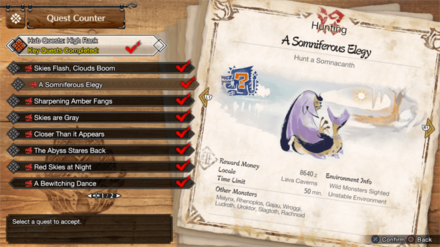 High Rank Somnacanth is unlocked by completing the Urgent Quest A Bewitching Dance and reaching HR 6. 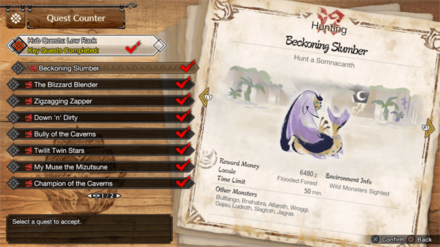 While in the water, it can move about as it pleases, but it doesn't fare so well on land. Draw it out to the shore for an easy hunt. If you're caught in a cloud of its sleep powder, it's lights out; use Wirebug to leap away from it and position for a counter attack.

How to Beat Somnacanth

Somnacanth inflicts Sleep with its gaseous breath and can also cause Blastblight with its Shell Attacks. Negate these potentially deadly effects by bringing Energy Drinks and Deodorant!

Investing in Sleep Resistance is also worth considering when hunting Somnacanth.

Keep Somnacanth Out of the Water

Some of Somnacanth's attacks only occur when it swims belly up in water. Its Shell Attacks and Breath Attacks in this state can easily disable hunters for a few seconds, allowing Somnacanth to deal easy damage.

To prevent Somnacanth from using these attacks, lure it to land using a Stinkmink or Wyvern Ride the monster towards dry areas.

Somnacanth often leaves its rear exposed whenever it stands upright on its tail for Slam Attacks or Breath Attacks. Stick close to its back whenever it performs these attacks to avoid getting hit and take advantage of the opening to deal massive damage to Somnacanth.

Use Sonic Bombs to Interrupt Somnacanth

When Somnacanth begins channeling its Sleeping Mist Nova, you can prevent it from occurring by throwing Sonic Bombs toward its face. Doing this leaves it vulnerable for a short while and allows you to continue your offense against Somnacanth.

In addition to its attacks in Low and High Rank quests, Somnacanth uses the following new attack in Master Rank.

Somnacanth has a variety of breath attacks that inflict Sleep on contact.

Somnacanth often leaps up from the ground to slam its body on top of the hunter, dealing heavy damage on impact.

Somnacanth can use its forelegs or massive head fin to perform sweeping attacks that knock away any hunters that get too close.

Somnacanth occasionally swims around on its back and picks up shells from beneath the water. The monster breaks these shells open after picking them up, causing explosions that inflict different status effects depending on the color of the shell.

In order for us to make the best articles possible, share your corrections, opinions, and thoughts about 「Sunbreak Somnacanth: Weakness and Drops | Monster Hunter Rise」 with us!