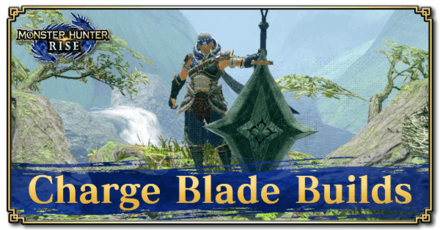 Ikaji Immortal's very high attack rating makes it the best Charge Blade for Ultra Elemental Discharges. It also comes with Dulling Strike, which is an amazing ramp up skill to have whenever we take advantage of green sharpness weapons.

Revolving around Ikaji Immortal and ultra element discharges, this build pumps as much attack as possible into the Charge Blade through Bludgeoner, Attack Boost, and Offensive Guard.

Rapid Morph is added for faster transitions between the Sword and Axe forms while increasing their transitional attack damage at the same time. Load Shells Lv. 2 allows us to fill phials completely from yellow charge levels, giving us more time to dish out damage during hunts.

Scream in the Night's great stats across the board makes it a very efficient Charge Blade to build around in Update 3.0.

This build improves the offensive capabilities of our Charge Blade across the board. Attack Boost and Weakness Exploit enhance our non-phial attacks while impact phial damage is increased through Artillery. Rapid Morph is retained for faster and more damaging transitions while Critical Eye Lv. 2 gives us just enough of a boost to reach 100% affinity on weak spots.

Lastly, Protective Polish is added alongside Speed Sharpening for extra sharpness management but you swap them out for Master's Touch or Razor Sharp if you prefer those skills instead.

Scream in the Night's amazing stats across the board still allows it to compete against the new Charge Blades of Update 3.0, making it the perfect weapon to use for the climb towards the current endgame.

Maximize Scream in the Night's damage with this build granting both high base damage with Attack Boost, Critical Boost, and Weakness Exploit. Rather than Speed Sharpening, we opted to utilize Master's Touch instead because of our high affinity rating.

Those with a penchant for critical numbers may opt for Scream in the Night instead. This particular Charge Blade's base 40% affinity rating lets you reach 105% total affinity on weak spots when combined with the build's Critical Eye and Weakness Exploit.

This build makes the climb to Monster Hunter Rise's current endgame relatively easy by improving the every offensive aspect of the Charge Blade.

With Scream in the Night as our affinity base, Weakness Exploit and Critical Eye Lv. 3 allows us to reach 105% affinity on weak spots.

Lastly, general performance and sharpness maintenance are improved via Rapid Morph and Speed Sharpening respectively. You can even add Sharp Jewel 2 to prevent sharpness loss for 30 seconds after sharpening.

Scream in the Night is one of the best Charge Blades in Monster Hunter Rise due to its attack rating, phial type, and 40% affinity rating. This is the perfect Charge Blade for any hunt at this stage of the game.

A build that that has Evade Window for extra survivability. Weakness Exploit + Latent Power coupled with the Nargacuga Charge Blade ensures a 100% affinity for Critical Boost's enhanced damage. A decent survivability build that doesn't lack any fire power!

Kaiser Blade's great stats for relatively cheap materials makes it the perfect weapon to start your high rank adventures with!

This is a straightforward build that gives you a good start at High Rank. Damage is primarily increased through Critical Eye.

Sinister Slasher I boasts great stats across the board and comes with Blast Element, making it the best Charge Blade at this stage of the game.

Those who prefer to pump affinity into their non-phial attacks may opt for the Hidden Arsenal I. This Charge Blade can compete with Sinister Slasher I in terms of damage due to its 30% affinity rating.

Picking up after our recommended early game sets, this armor combination grants quick transitions between sword and axe via Rapid Morph form while bolstering defense with Guard.

The addition of Offensive Guard gives your attacks a small but welcome boost after a perfectly-timed block as well!

Regas Hyper hosts amazing stats for cheap materials. This particular Charge Blade's impact phials make it an efficient weapon against any hunt in the earliest stages of Monster Hunter Rise.

Landing Ultra Discharges can be a tricky task for new players. Rough Roller I addresses this issue with its Paralysis Element. This is an extremely useful status to inflict on monsters because it locks them in place for a few seconds, allowing you to dish out your powerful discharges comfortably!

This set grants faster transitions between the Sword and Axe forms of the Charge Blade with the help of Rapid Morph, enabling you to deal heavy amounts damage quicker!

Register as a member and get all the information you want. (It's free!)
Login
Opinions about an article or post go here.
Opinions about an article or post
We at Game8 thank you for your support.
In order for us to make the best articles possible, share your corrections, opinions, and thoughts about "Charge Blade Builds and Best Equipment | Monster Hunter Rise" with us!
When reporting a problem, please be as specific as possible in providing details such as what conditions the problem occurred under and what kind of effects it had.