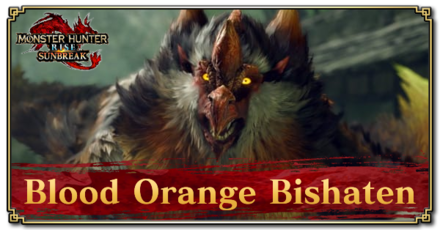 How to Unlock Blood Orange Bishaten 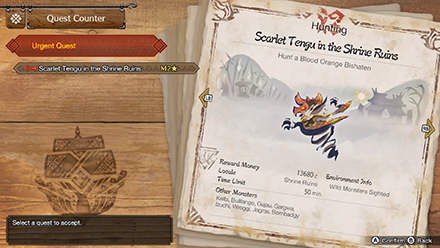 Blood Orange Bishaten is the target of the Urgent Quest that unlocks MR 2. You can get the quest by finishing two M★1 Key Quests after completing Tetranadon Blockade. 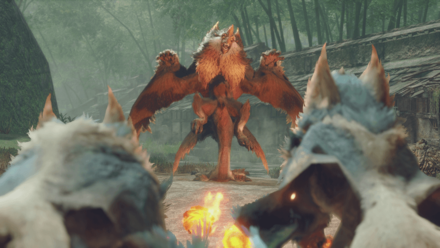 Ignites pinecones in a variety of ways, then attacks using a variety of arcs. The cones will explode when touched, or after a certain amount of time. When enraged these Bishaten subspecies have a fiery breath attack. Positioning is key as any cones in this breath attack's path will be ignited.

How to Beat Blood Orange Bishaten

Blood Orange Bishaten starts this attack by striking two pinecones together then shooting it in a straight line. This usually creates an opening afterwards for attacks!

Attack the Head After the Fire Breath

Like most straight line fire breath attacks, Blood Orange Bishaten is exposed from the side whenever it does this move. Make use of this opening and let out all your atttacks.

Don't Wirefall After the Tail Slams

Blood Orange Bishaten Tail Slams usually happen in series - up to three (3) times in succession. Whenever it does this, do not Wirefall away as it can catch you off guard. Use the invulnerability window for when the Hunter is laying down on the ground.

Roll to Get Rid of Fireblight

Blood Orange Bishaten deals Fireblight which causes damage over time. Roll thrice (3) or roll once (1) over water to get rid of this pesky blight.

Blood Orange Bishaten loves attacking with its really strong tail. With its mastery of fire, it even incorporates it to deal explosive damage!

Blood Orange Bishaten ignites two Pinecones on its hands then slams it on the ground, creating explosions in the process. Know how each explosion look like to better avoid the moves!

Blood Orange Bishaten replaces the usualy fruits with fiery pinecones that it uses to deal explosive damage against enemies. Know how each pinecone moves and you'll be able to avoid them every time!

In order for us to make the best articles possible, share your corrections, opinions, and thoughts about 「Sunbreak Blood Orange Bishaten: Weakness and Drops | Monster Hunter Rise」 with us!