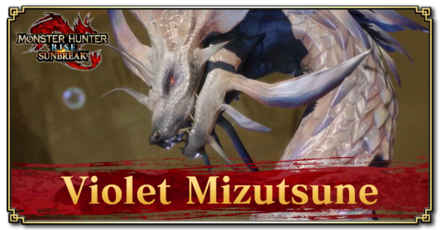 How to Unlock Violet Mizutsune 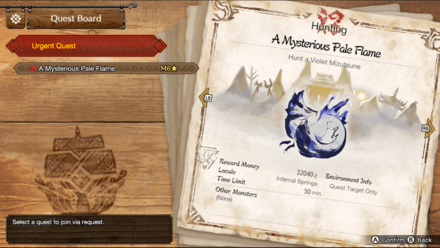 To hunt Violet Mizutsune after downloading Sunbreak's Title Update 2, you need to raise your MR to 10.

You also need to beat the Urgent Quest What Sleeps in the Tower which features Flaming Espinas.

After beating the quest, speak to Doctor Tadori and to Chichae the Quest Damsel to unlock A Mysterious Pale Flame. 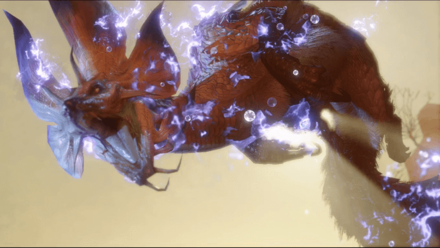 The key to subduing Violet Mizutsune is to avoid their bubble barrage, but beware; once they're enveloped in flame, their attacks become more powerful. Look for openings to attack and if you continually attack parts covered in flame, you'll topple the monster, providing a chance for a counter-offensive. Avoid wearing armor with low fire resistance. 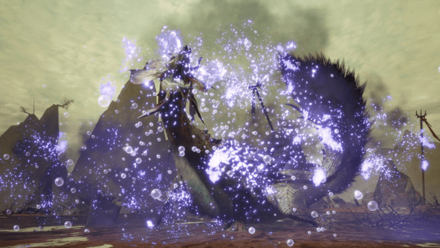 Violet Mizustsune is a new Rare Species that will make its debut in Sunbreak's Title Update 2.

This Mizutsune variant did not just have a slightly new paint job, it now utilizes fiery attacks!

How to Beat Violet Mizutsune

Violet Mizutsune, as aggressive as it is, has several attacks which leaves it vulnerable. If you are not being targeted, try to get some quick hits while Violet Mizutsune is finishing up its current attack.

Avoid Getting Up Early

If you have a tendency to use your Wirebug as soon as you can when knocked down, try to hold yourself from doing so especially when fighting Violet Mizutsune.

This monster's moves are all about follow-ups, specifically its bubble attacks which home in towards you even if you are on the ground.

If you wait for a few moments before getting up, you may end up stalling Violet Mizutsune's moves rather than meeting one of its bubbles as soon as you leap away with your Wirebug.

For hunters using long-range weapons, try to pop Violet Mizutsune's bubbles when you can. This will help clear out the field from its homing projectiles and may end up saving one of your hunting buddies when they are being targeted!

Violet Mizutsune's attacks will constantly require you to dodge due to the range of its attacks and how agile it is on the field. Avoid staying in position and try to keep up with its movements.

Violet Mizutsune is more dangerous when it is Enraged, as its attacks are more powerful and deal more damage. Once it is on fire, attack its head or tail until it is knocked down to remove its Enraged State.

Additionally, once it charges up its signature move, prioritize removing its Enraged State to avoid setting off the bubble bomb. This will also cause the attack to hit Violet Mizutsune instead!

Like other monsters, Violet Mizutsune can use its tail to deal damage.

Violet Mizutsune is able to utilize its normal variant's water breath attacks, with a key difference being it now leaves a trail of flames on the ground!

The safest way to avoid this attack is by rolling away as far as you can from the monster, as Violet Mizutsune's water breath has a long range.

Violet Mizutsune can lob multiple homing bubbles which follow the monster's chosen target. The bubble will explode when it comes into contact with a hunter, the terrain, or with Violet Mizutsune's body.

Roll away from the area to avoid getting caught by the monster's bubble attacks but keep an eye out for any follow-up bubbles!

In an attack similar to its normal variant, Violet Mizutsune can lunge toward hunters and crush them with this heavy attack.

Violet Mizutsune can use its body to leave several flaming puddles across the field. These puddles will burst after a while.

Avoid rolling towards the puddles as it will explode, deal damage, and launch you upwards upon contact!

Violet Mizutsune's signature ultimate move wherein it forms a giant bubble. It will hover above the ground while Violet Mizutsune returns its focus towards its targets.

The monster will then perform a dance to release the bubble and cause a giant explosion which can easily knock out any hunters near the area.

This move can be interrupted by taking Violet Mizutsune out of its Enraged State before it releases the bubble, and will instead land back on the monster which damages it.

Violet Mizutsune was revealed along with Risen Chameleos and some of the new features that will be added in Sunbreak's Title Update 2.

In order for us to make the best articles possible, share your corrections, opinions, and thoughts about 「Sunbreak Violet Mizutsune: Weakness and Drops | Monster Hunter Rise」 with us!