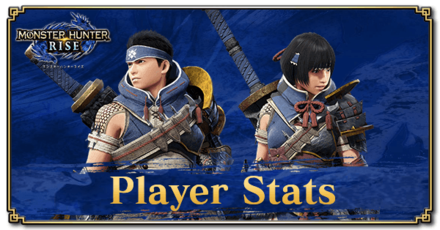 Explanation of Each Player Stat

The green bar on the top left indicates how much health you have. When you get hit, a portion of your health bar will turn red. This red health recovers back to green slowly over time, but natural recovery is very slow that it's hard to rely on. Some Armor have armor skills such as Recovery Up which boosts your recovery.

When you completely run out of health, you faint, and you get carted back to camp. Usually there's a maximum of 3 faints per hunt, so make sure you are prepared because you will have to start a completely new hunt if you max out your faints.

You can recover lost health through Potions, Max Potions, Vigorwasps, and other healing items. In Monster Hunter Rise, you can increase your maximum health for the entire duration of the hunt by gathering green Spiribirds. However, there is a limit to how much the Spiribirds can increase your stats by. You can also recover health by getting hit with Green Lampsquid ink while traversing the Frost Islands!

Beginner's Guide and How to Get Started

Yellow Arrows On Your Health Bar

When out on hunts, you may see yellow arrows on your health bar. This only happens when you've eaten for the Dango skill Dango Moxie found in the Magnaroar and later Magnacrisp dango flavor!

As the skill explains it, any single attack that may reduce your health to zero while you are below that yellow arrow threshold will not cart you - instead it will retain 1 HP to keep you alive!

Red Meter Above the Health Bar

The red meter above the health bar appears when you grab the Lanternbug Endemic Life. This acts like a health bar buffer that will absorb damage before actually depleting your health!

The yellow bar on the top left indicates how much stamina you have. It gets expended whenever you do actions like evading or running up a wall. Weapons also have attacks that use up stamina, some quicker than others.

While it always recovers quickly, maximum stamina will always decrease over time. You can effectively manage your stamina with a plethora of items like:

You can also go around the map and gather yellow Spiribirds to further increase your maximum stamina. How much stamina you will have at the start of the hunt is determined by what Petalace you wear.

Some Decorations and Armor skills like Stamina Surge that increases stamina regeneration and Constitution that reduces the stamina consumption of all stamina-consuming actions can also be used! 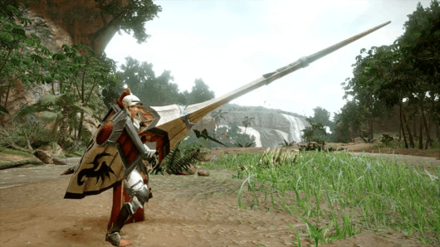 Your Attack stat determines how much damage you can do to monsters. Each weapon has a different attack stat, so make sure to upgrade them regularly! Certain armor also has the Attack Boost skill. You also have the option of crafting an Attack Jewel 2 decoration to fit into your armor slots!

In Monster Hunter Rise, you can increase your Attack by gathering red Spiribirds.

Weapons can inflict elemental damage on top of the raw damage. Whether it's fire, water, thunder, ice, or dragon is determined by the weapon itself. If you're having difficulty fighting a monster, you should try looking at what element they're weak to by checking out the Hunter's Notes (Press + → Info Tab → Hunter's Notes).

Sadly, weapons cannot do this so we'll have to make do with these Endemic Life. 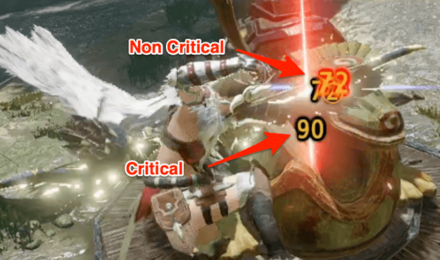 Your Affinity is your chance to deal critical damage. You will know if your attack is a critical hit if it has increased damage and it has a red line coming out of the damage numbers.

Gathering Red Lamsquid ink in the Frost Islands grants Affinity Up, buffing your base critical chance at 15% per Lampsquid up to 50% total!

In Monster Hunter Rise, you can increase your defense stat by gathering orange Spiribirds. Some Armor Skills give a boost of defense such as Defense Boost among others. Slotting in Defense Jewel 1 decorations in Armor Slots also boost defense. 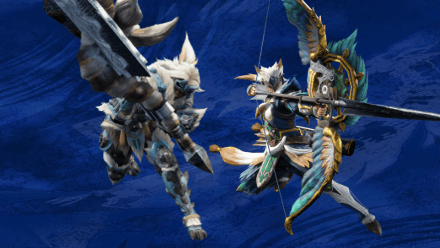 While armor is the most important factor when it comes to building up your defense, each weapon in the game also has a built-in defense boost. 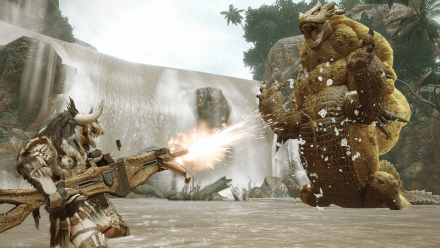 If you built your resistance up to 20, you would be completely immune to the blight related to the resistance you have built up. For example, if your Fire Resistance reached 20, you would not get Fireblight anymore even if you got hit with Rathalos' fireball. If you have negative resistance, you will get increased damage from that said element.

You may also increase your Elemental Resistances by looking out for resistance Armor Skills and decorations:

In order for us to make the best articles possible, share your corrections, opinions, and thoughts about 「Sunbreak | Explanation of Player Stats | Monster Hunter Rise」 with us!