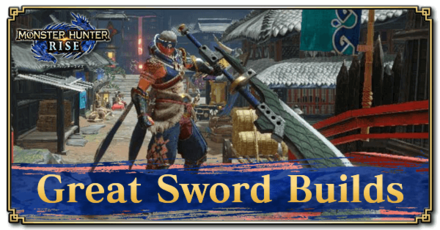 This is a guide to the best builds and equipment for Great Swords in Monster Hunter Rise (MH Rise) for the Nintendo Switch. Learn about the best Great Swords for Update 3.0, and the best Skills and Armor pieces to use with the Great Swords for Low Rank, High Rank, and endgame.

Crimson Glow Valstrax Full Armor brings the Dark of Night Great Sword to even high heights with built in Weakness Exploit and the huge Raw damage boost from Dragonheart activation. With 3 Levels of Critical Eye, we can achieve 100% Affinity on weak points!

Tigrex Great Sword boasts 210 attack and white sharpness. Its -15% affinity rating can be easily offset with three levels of Critical Eye, making it the best Great Sword of Update 2.0 in terms of raw damage.

While its attack is easily outclassed by other Great Swords at the top, Dark of Night's 35% affinity rating and white sharpness make it a viable weapon for Monster Hunter Rise's current endgame.

Using Dark of Night's high affinity rating as a base, this build reaches 100% affinity on weak spots via Critical Eye and Weakness Exploit Lv. 3. Focus is included to improve charge times, allowing you to sneak a few charged slashes in more frequently during hunts.

Dark of Night's high affinity rating and white sharpness makes it incredibly easy to build around. With these in mind, this particular Great Sword is a good choice to for the climb towards Monster Hunter Rise's current endgame.

This build reaches 100% on weak spots through Critical Eye and Weakness Exploit. Critical Boost is added to increase damage while Focus reduces the charge times of all of the Great Sword's charged slashes.

Dark of Night is the perfect weapon to reach the end of 7★ Quests due to its high affinity and white sharpness.

Adopting a mobile playstyle, this build is primarily focused on maximizing the Great Sword's charged slash from its sheathed position. Affinity is raised to 105% on weak spots with the aid of Critical Draw and Weakness Exploit while Punishing Draw adds KO damage to your sheathed slash.

An easy to craft weapon with a decent 150 damage and a blue sharpness. This Great Sword is enough to carry you at the early stages of your High Rank adventures!

This build has vital skills such as Focus, Critical Eye, and Weakness Exploit — Skills that improve the Great Sword's general performance at the early stages of High Rank.

Gossblade I has a base attack rating of 170, one of the highest at this stage of the game. Its -15% affinity rating can be easily negated by three levels of Critical Eye as well to maximize the Gossblade's damage.

Buster Blade a Great Sword with great stats across the board. It is also the next upgrade from the Buster Sword I, further solidifying the reliabilty of the Great Sword's Ore Tree.

The armor combination we listed below re-introduces an old Great Sword playstyle with the help of the Critical Draw skill. This allows you to maximize your Great Sword's draw attacks by increasing the affinity of those particular attacks, improving overall mobility as well in the process!

Combined with Critical Eye, this offense-oriented set ensures that you dish out optimal damage across the board.

The Buster Sword I, along with the other Great Swords within the Ore Tree, provide great base attack damage, have neutral affinity ratings (0%) across the board, and are relatively cheap to craft compared to its peers.

These factors make these particular Great Swords one of the best and most reliable weapons at this stage of the game.

Barroth's Carapace Sword II provides amazing attack damage (130) in the early stages of the game at the cost of its -20% affinity rating.

The negative affinity rating may seem off-putting at first, but this disadvantage can be easily negated when combined with our recommended armor combination for the early game.

The Great Sword's strength lies in its ability to dish out insane amounts of damage with its slow, but strong attacks. In light of this, we want to make the most out of each swing of this behemoth of a weapon type!

The armor combination we recommend below prioritizes the Critical Eye skill to amplify the Great Sword's high base attack, providing its wearer the most bang for every buck.

You can start with the full Izuchi Set for starters since most of its pieces provide Critical Eye. Defense is not an issue in 1★ to 4★ quests so prioritize pumping out as much damage as possible!

Register as a member and get all the information you want. (It's free!)
Login
Opinions about an article or post go here.
Opinions about an article or post
We at Game8 thank you for your support.
In order for us to make the best articles possible, share your corrections, opinions, and thoughts about "Great Sword Builds and Best Equipment | Monster Hunter Rise" with us!
When reporting a problem, please be as specific as possible in providing details such as what conditions the problem occurred under and what kind of effects it had.