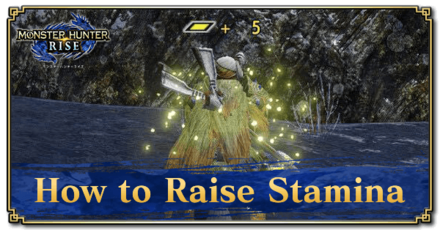 This guide will show you how to raise your maximum stamina level in Monster Hunter Rise (MHR). Additionally, this page will explain what the stamina mechanic is used for, and how it can be refilled after running out.

Allows you to perform various actions 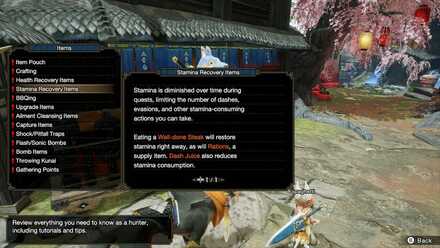 Stamina is the yellow bar that appears underneath your health bar. Certain actions, such as sprinting (both on the ground and on walls), as well as rolling, and using particular weapon types (Duel Blades, Hammers, Insect Glaives, etc) will use up your stamina in order to use. Unlike health, stamina will begin recovering as soon as you finish performing the action that was using it up, until it reaches its max.

You will briefly become immobile if fully depleted

If you continue using stamina until the bar is completely depleted, your character will have to halt to catch their breath and recover some stamina. You will be unable to roll once your stamina is low enough (at which point it will blink red), but if you continue trying to run past this point, you will run out. Be sure to stop and recover some stamina to avoid letting this happen! 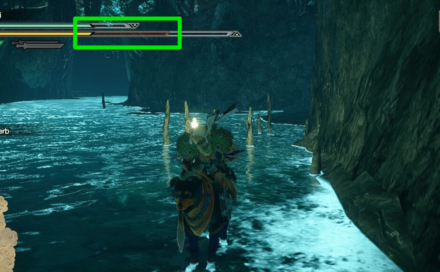 Your stamina fills itself back up when you aren't performing an action that uses stamina, although your maximum stamina will gradually deplete over time as a quest goes on. This happens due to hunger, and is represented as a red outlined empty bar that extends to where your maximum stamina originally was.

Use a Food Item to Restore Stamina 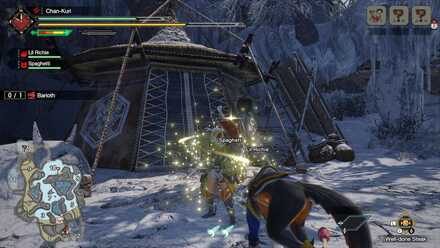 When your maximum stamina depletes itself, you can raise it back by eating various food items. A well-done steak will fully restore your stamina, while rations will restore a small amount of stamina. EZ Rations can be found in the supply box of most lower ranked missions, so be sure to check it before setting off to defeat each quest's monster!

How to Raise Max Stamina

As mentioned above, eating food will allow you to restore your stamina back to its maximum value that you began the mission with. However, there are also several methods by which you can raise the maximum stamina your character has in a quest. 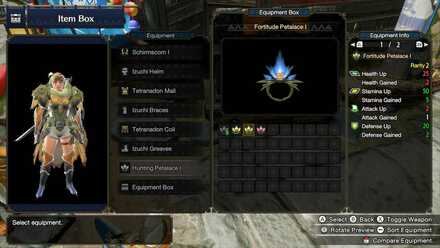 Petalaces are a type of equipment on your character, which can be changed at any item box in the village (or in a tent within a quest). As you progress through the Village Quests, you should begin to pick up more and more of these. These can raise various stats, such as maximum stamina, maximum health, attack, and defense (as well as the amount of these stats you gain when receiving a buff). 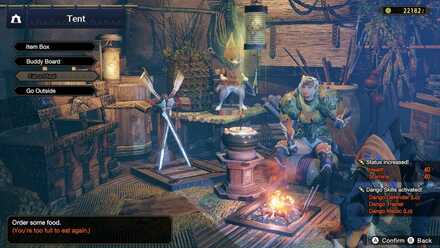 When you begin a mission, you have the option to go inside your tent and eat a meal at any time. In addition to the various effects that you can gain through eating dangos, eating them will also increase your maximum health and stamina! As you reach higher ranks, the amount of health and stamina gained is also increased. 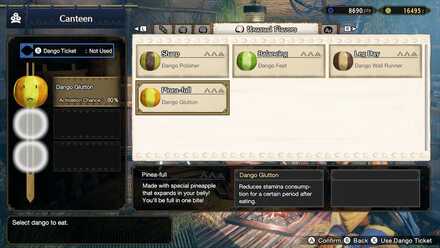 Bunny Dangos can give a wide variety of effects, including some that can decrease your character's stamina depletion. Since this will allow you to lose less stamina through your actions, it in effect increases your maximum stamina.

Spiribirds are a type of Endemic Life that can be found in Monster Hunter Rise. If you are near them, their pollen will be absorbed for various buffs. A Spiribird's color determines what kind of buff they will give you, with the yellow variety giving you increased maximum stamina. Each type is beneficial to you, so be sure and go near them when you see one! 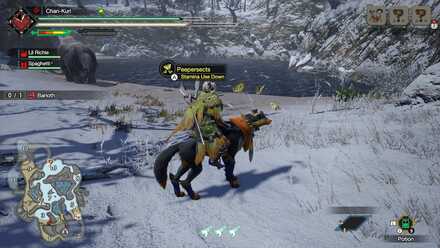 As mentioned above, you can also find items that will decrease the amount of stamina you spend on actions, which will in effect increase your maximum stamina. In addition to certain bunny dango types, Peepersects are another type of Endemic Life that you will encounter that can allow you to decrease stamina usage. Simply draw near them and press A to receive the buff.

In order for us to make the best articles possible, share your corrections, opinions, and thoughts about 「Sunbreak | How to Raise Max Stamina | Monster Hunter Rise」 with us!